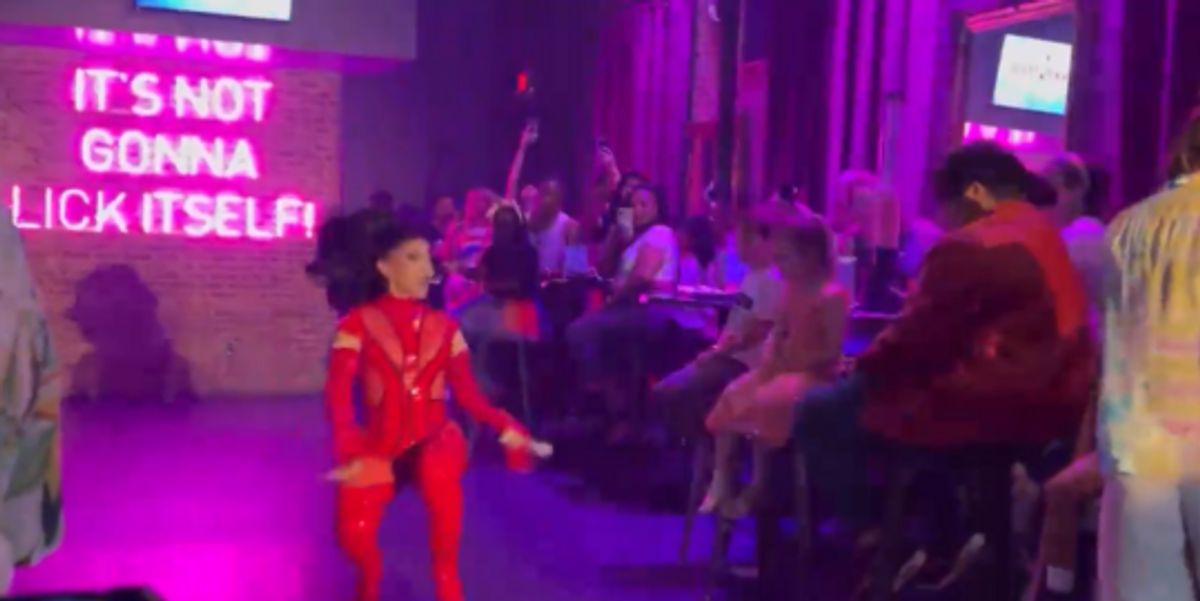 A Texas gay bar hosted a “Drag the Kids to Pride” event where drag queen dancers provocatively gyrated in front of children as young as toddlers. Tensions flared when protesters demonstrated outside the venue hosting the drag queen show for children.

A poster for the “Drag the Kids to Pride” event claims it is the “ultimate family friendly pride experience.”

“Our under 21 guests can enjoy a special Mr. Misster Mocktails while the moms and dads can sip on one of our classic Mr. Misster Mimosa Towers,” the poster reads. “Do you want to hit the stage with the queens? We have FIVE limited spots for young performers to take the stage solo, or with a queen of their choosing! Come hangout with the Queens and enjoy this unique pride experience, fit for guests of all ages!”

The Texas gay bar said the “Drag the Kids to Pride” event was a spinoff of Mr. Misster’s Champagne Drag Brunch – which tickets start at $25 and go all the way up to $600.

There are neon signs at the gay bar that read “It’s not gonna lick itself” and “I licked it so it’s mine.”

u201cA u201cchild friendlyu201d drag show is being hosted today in Dallas, TX at a gay bar.nnHere are two of the signs on display.u201d

Video shows drag queens dancing with young children and teaching them how to walk the runway at the gay bar.

u201cThe parents of these children should be arrested.u201d

BlazeTV contributor Alex Stein attempted to attend the “Drag the Kids to Pride” event but was denied access at the door. Several supporters of the drag queen event for children assaulted Stein as they attempted to prevent him from filming.

“They’re bigoted,” Stein said of the gay bar staff. “I can’t believe they’re not letting me in a gay bar – I thought you guys were inclusive?”

They’re gonna groom a bunch of children,” Stein screamed. “They won’t let me in, but they’ll let children in.”

Stein wrote on Twitter, “7 year olds tipping drag queens and hanging out in a 21 and up bar & the Dallas Police dept is letting it happen….why not enforce the law?”

Stein confronted one of the drag queen performers regarding dancing in front of little children.

u201cAsking the drag queen how she feels for exploiting little children?u201d

There were physical confrontations near the gay bar. A person wearing a “Love is Love” shirt repeatedly shrieked at protesters, “Shut the f*** up!”

An attendee of the gay bar event spit on a woman recording video of the event. The woman reportedly filed a police report against the man.

u201cMy girlfriend was just spat on for recordingu2014nnu201cYouu2019re going to hell too little girl, burn in hell you fucking cuntu201d.u201d

There was immediate backlash to the “Drag the Kids to Pride” event.

TheBlaze’s Jason Whitlock: “This is satanic.”

Podcast host Allie Beth Stuckey: “Every single Republican legislature should be creating a bill to criminalize drag shows that involve children. The parents, performers, bar owners – everyone should be charged with sexual abuse of children.”

Conservative commentator Matt Walsh: “Every adult in the room should spend the rest of their lives in solitary confinement.”

Investigative reporter Drew Hernandez: “This is vile, all of these LGBTQ pedophiles should be arrested immediately And the parents that enabled this should be arrested as well. This is what happens when this crap gets normalized in society, you get gay bars grooming kids with Drag Queens.”

Radio host Jesse Kelly: “Not sure people realize how painful a national course-correction is gonna be. Live it up. Have your fun. The realignment of society at the back end of this will be ugly.”