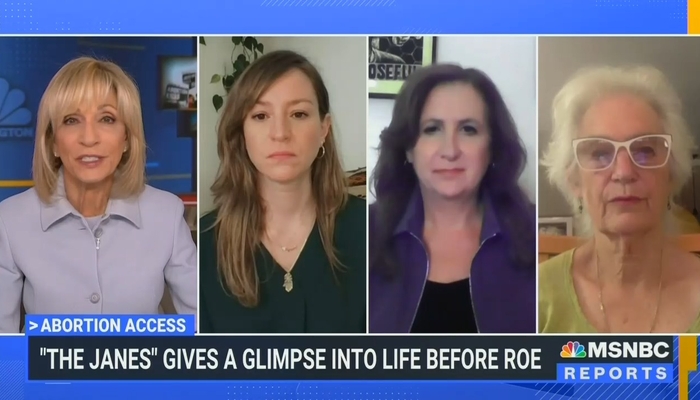 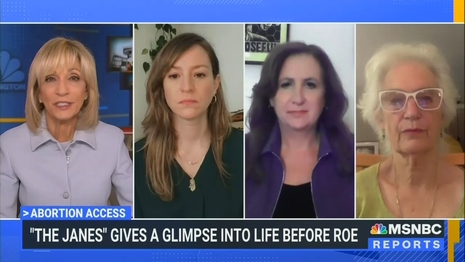 MSNBC awarded 15 minutes of promotional time on Friday and Saturday to a new movie glorifying “female heroes of history” who committed an estimated 10,000 illegal abortions in Chicago in the five years before Roe vs. Wade legalized abortion in 1973. The Janes will debut on HBO on Wednesday.

Andrea Mitchell touted these women providing underground “access to safe abortions.” Co-director Emma Pildes said “we so often don’t hear about the female heroes of history. Those stories don’t get told. So, it was just such a compelling opportunity for us to give these women a platform, especially at this time, you know? We’re filmmakers. This is what we have to contribute to the fight.”

It’s okay to roll your eyes when feminists talk about “safe abortions” that “save lives,” as if doesn’t matter at all that the baby ends up unsafe with no life.

This rhetoric continued as Mitchell then asked the other co-director Tia Lessin what she hoped people would take away from the film:

LESSIN: We hope that people, as Emma said, get a sense of what it was like before we had federal protection for abortion and understand that this is — this is our future. And, you know, it may mean death sentences for many people who won’t be able to access, you know, affordable or safe, legal abortion care. You know, what we know and what we found in this film is when abortion is criminalized, it doesn’t mean that women don’t have abortions. It just means that they don’t have access to safe abortions. So, we hope that this film is a cautionary tale and also an inspiration, you know, to help people understand the stakes and to mobilize, you know, for change.

“The Janes” were responsible for 10,000 death sentences, but they’re the “heroes.” 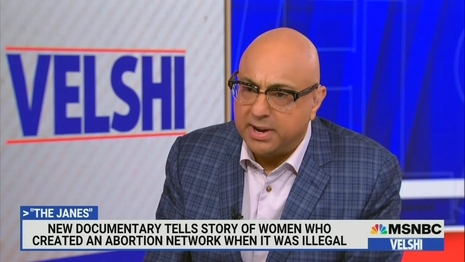 It was more of the same on Saturday, as Ali Velshi began and ended his seven-minute interview by gushing “thank you for making this” on his Saturday program. He said it was a “remarkable film at a remarkable time.”

Once again, Pildes said the women were “smart, deeply moral human beings that put all of their smarts to test here….They want to save women’s lives at any cost. ”

Lessin said today is “much more draconian” now than the pre-Roe atmosphere because women face prosecution for going out of state for a procedure.

Then Velshi claimed “The criminalization of abortion, which is what your film brings to light, I think this feels like a bridge too far, probably even for people who have conservative views on things.”

Andrea Mitchell’s abortion-promoting segment was made possible in part by Walgreens.

South Dakota Attorney General Barred From Future Office After Impeachment Conviction Over Fatal Car Crash in Which He Killed a Pedestrian
World Health Organization says monkeypox is not a global health emergency right now
Philadelphia Inquirer editorial board: ‘These high gas prices aren’t Joe Biden’s fault’
I Guess It’s Okay to Question the Legitimacy of Our Institutions Now
Nonbinary teacher complains about people failing to use they/them pronouns in emails: ‘I got really, really tired of people using the wrong pronouns’