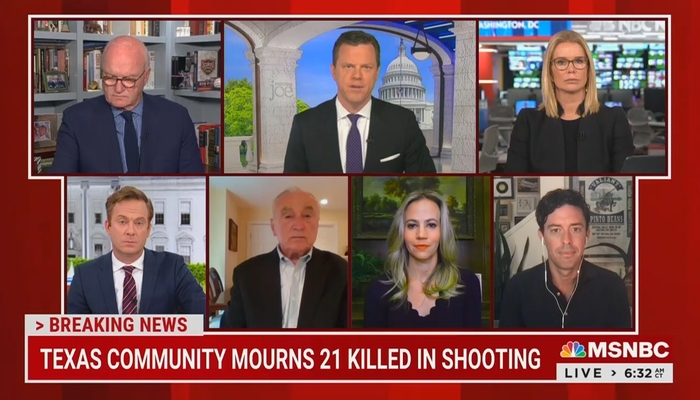 MSNBC’s Morning Joe is a show where all of the conversations are typically dominated by main host Joe Scarborough and co-host Mika Brzezinski. Viewers who actually possess some form of sanity are usually subjected to the two hosts constantly ranting, complaining, and crying wolf on the GOP. In general, those poor people who tune in just mainly see the hosts filling their time slot by being obnoxious and wasting everyone’s time.

On Friday, however, viewers finally seemed to get a well-deserved break, as Scarborough and Brzezinski were missing from the hosting line-up, leading to co-host Willie Geist taking the reins that Scarborough unfortunately has control over. With Geist taking charge during this broadcast, the show was not painful to watch for once. People got to see less liberal, leftist ranting and saw more focus on reporting events currently happening in our country today.

Despite the bias-bringing duo being absent, the show was still not completely lacking in complaints towards the GOP, especially following the devastating school shooting that took place on Tuesday. Geist brought in Bulwark contributor Tim Miller, who appeared on the show via video, where the two discussed the shooting, and of course— how tired they are of the Republican Party.

“There is this bipartisan group having a conversation now, for whatever that’s worth,” said Geist, adding that, “Joe Manchin said yesterday, this time feels different. We noted he said the same thing after Parkland and similar sentiments after Sandy Hook.” Continuing the discussion further, he asked Miller “what is the way forward? Is there anything achievable in trying to prevent elementary school kids from being killed in their classrooms?”

Miller responded to Geist’s question by stating that “speed is important” when addressing such issues, and that the longer lawmakers wait to meet, the more “excuses pile up.” Miller said this in reference to the House not meeting for the recent future when a background check bill is being pressed to be passed. 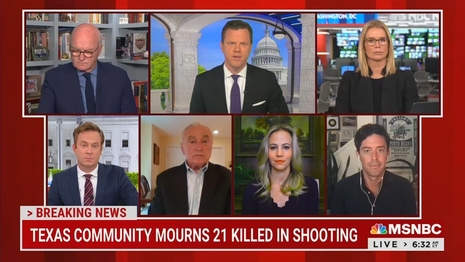 Both men expressed disapproval with this weekend’s NRA convention still proceeding and being held less than 300 miles away from the school shooting. Furthermore, Miller accused Republicans of being “scared of the NRA, you are scared of your voters, or you are apathetic about the deaths of these little children,” calling them to stop being afraid and actually do the right thing.

Miller even cited Rick Scott’s decision to increase the assault weapon-buying age from 18 to 21 stating that “The NRA didn’t come for Rick Scott. He moved from governor to Senate. He wasn’t primaried.”

Even with less vexing people on this most recent broadcast, it is still clear that the liberal media believes that Republicans are in the wrong; that they believe in “ridiculous door control” ideas and that money are to blame for the lack of “inaction.” It is as if they really think that the GOP will tremble before the scary NRA.

This example of media bias was brought to you by Xfinity and USPS.

WILLIE GEIST: Tim, there are a couple pieces of legislation sitting in the House that passed through the House on background checks, expanding those that have not been taken up by the Senate. Chuck Schumer trying to get that going. There is this bipartisan group having a conversation now, for whatever that’s worth. Joe Manchin said yesterday, this time feels different. We noted he said the same thing after Parkland and similar sentiments after Sandy Hook. But as you think about this, what is the way forward? Is there anything achievable in trying to prevent elementary school kids from being killed in their classrooms?

TIM MILLER: Yeah, hey, Willie, first thing is I think speed is important. You know look, we’ve seen this both on shootings and this is dark, obviously we saw it with the second Trump impeachment right like if these guys go on a vacation, if weeks pass, momentum for this stuff fails. Excuses pile up, so I think that Chuck Schumer and the Senate should bring up the background check bill. But the two tangible things that could respond to the shooting in Buffalo and the shooting in Uvalde that I think they should bring up are the two changes that Republicans in Florida made after the Parkland shooting. Rick Scott, who is in the Senate right now, was governor of Florida and he signed a law that would put in these red flag laws, which are kind of these restraining orders for people who are a danger to themselves or others that family members or police could go to the courts to get weapons removed from them. And the second one is when Garrett Haake was talking to the congressman about changing the age to purchase a weapon from 18 to 21. It is insane that you can buy two assault rifles online in the state of Texas, but you can’t buy a glass of wine at dinner. Nobody could be for that in a genuine, principled manner. The only reason that you would want to keep the law like that is because you are scared of the NRA, you are scared of your voters, or you are apathetic about the deaths of these little children.

GEIST: Tim Miller, let’s talk about the NRA convention taking place this weekend in Houston. Former President Trump will be there as of now, Senator Ted Cruz still on the schedule. Texas Governor Abbott has announced he will not attend, though will provide a video message. Can you speak to the power of the NRA that has waned certainly in recent years through scandal and grift and everything it has gone through, but is it as easy — is the explanation for inaction as easy for people like Ted Cruz and others, that they just get a whole bunch of money from the gun lobby?

MILLER: You know, Willie, I don’t think so. I think that this is sometimes a little bit of a miss on the left of understanding what is happening with conservatives and what motivates them. Look, the NRA is powerful and the NRA has money because they have members. This is a bottom-up problem, not a top-down problem, right? And so, the amount of money certainly influences politicians right, you know they want to appeal to donors, there’s no doubt about that; but the big fear on acting on guns is that there’s going to be this — this bottom-up revolt, they’re going to get primaried, that voters are going to be unhappy with them, that they’re going to get calls to their office, that they are going to get shouted down at the airport like Lindsey Graham did famously in Reagan Airport. I think that fear of their own voters is the real motivation that’s driving Republicans here, but I think, just going back to my first point, that is why, you know, you should push legislation that has already been demonstrated to not create this backlash. In Florida, after Parkland, they changed the law to raise the age to buy an assault weapon to 21 and there was no backlash. The NRA didn’t come for Rick Scott. He moved from governor to Senate. He wasn’t primaried. That would be the message that I would be sending to all these Republicans: stop being so, you know, scared. Stop listening to your consultants who are offering you this conventional wisdom that you should do nothing and propose this ridiculous door control instead of doing something that could actually save the lives of these kids and I think that gets at their motivations a little better than saying it’s just the money, which definitely isn’t nothing, but is not alone as — as what is influencing the inaction.

GEIST: Call it the Ron DeSantis bill if it helps you get it through and makes you feel better about it.

Jen Rubin gets hammered online for claiming a state can now ‘execute’ a woman who gets an abortion
‘Your terms are acceptable’: Liberal actor/director Ken Olin tweets, ‘In States where abortion is illegal the father should be financially on the hook at the moment of conception’
Is it Ruth Bader Ginsburg’s Fault That Roe v. Wade Was Overturned?
AOC says that the predominance of men in Congress explains ‘why our politics are so gross towards women & LGBT+ people overall’
Far-left actor Ron Perlman says pro-2A Supreme Court ruling ‘for whites only’ — except Justice Clarence Thomas wrote majority opinion