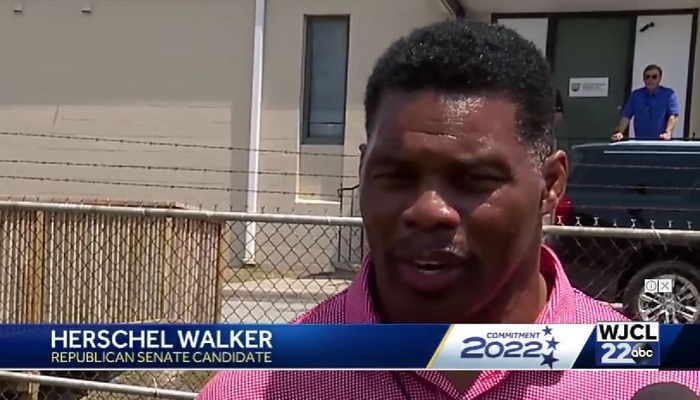 Walker is a flawed candidate, prone to exaggeration, as the Times has consistently documented this year, while mostly avoiding Democrat Warnock’s own flaws. Weisman (a white reporter, noted only because race is so important to Weisman here) still managed to be unfair to the black Republican.

He made no mention, not even a condescending one, of how eager supposedly racist Republicans are (as the paper feverishly claimed after the Buffalo massacre) to vote for a black candidate or the historic nature of a black Democrat against a black Republican competing for a U.S. Senate seat in Georgia.

Weisman was obsessed with the white-black dichotomy in a race that would pit two black candidates against each other.

Herschel Walker, the former football star leading Georgia’s Republican primary for Senate, had a mixed message about racial issues for 70 or so supporters, mainly white, who came to hear his stump speech this week at the Georgia Sports Hall of Fame.

The white members of the audience cheered. The few Black onlookers had a different reaction, wondering what race-blind Georgia he seemed to be referring to.

As Mr. Walker nears his coronation on Tuesday as the Republican nominee for one of Georgia’s Senate seats, it is clear that racial issues will be a major factor this fall, when he is all but certain to face Senator Raphael Warnock, the incumbent Democrat.

The contest between Mr. Warnock, a longtime civil rights champion, and Mr. Walker, whose ambivalence on the issue has long dogged him, is expected to be tight….

White Republicans here welcomed Mr. Walker’s assurances that accusations of racism and injustice are all about division, when the nation needs unity.

Weisman blamed Walker for racial stands he didn’t take at the age of…18?

He often riffs about what he calls an agonizing choice between joining the Marines or playing college football, then choosing a college as the most recruited high school athlete in the country.

Left unmentioned is another event from those days that Mr. Jackson readily offered up, a civil rights showdown in 1980 in little Wrightsville between the Black community and local law enforcement that brought Black leaders like Hosea Williams to town from Greater Atlanta, as well as Ku Klux Klansmen like J.B. Stoner.

Black local leaders wanted their most celebrated athlete to weigh in, but barely 18 and a high school senior debating his college choices, Mr. Walker stayed away.

“He said: ‘I don’t believe in race. I believe in right and wrong,’” Mr. Jackson, who is white, said approvingly.

After noting “the football star’s history of domestic violence, his admitted struggles with mental illness,” the reporter predicted Walker’s message would fail because of black resentment of the infamous police killing that happened two years ago in Minneapolis.

….may not work the way the Republican establishment hopes. After the murders of George Floyd in Minneapolis and Ahmaud Arbery in Brunswick, Ga., 170 miles southeast of Macon, many Black voters are in no mood for the broad absolution of white people that Mr. Walker appears to be offering.

Meanwhile, Warnock’s gross accusations of a “Jim Crow” assault on voting rights didn’t garner any objections from the Times.