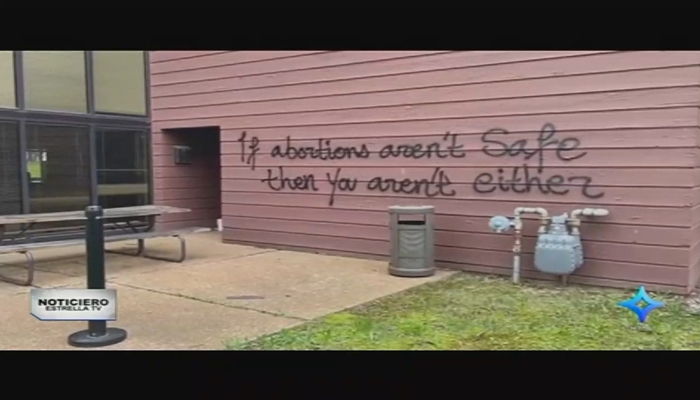 News of a violent terror attack against a pro-life clinic in Madison, Wisconsin, got the quickie treatment at the Latino networks, which spent a total of 74 seconds reporting the attack which included throwing two Molotov cocktails into the facilities, lighting a fire and posting a menacing graffiti warning that “If abortions aren´t safe, then you aren´t either”.

Watch this video compilation with the reports that aired on Telemundo, Univision and Estrella TV on Monday, May 9th:

SATCHA PRETTO, DESPIERTA AMERICA, UNIVISION: Wisconsin authorities are investigating as arson, the fire that broke out in the office of an anti-abortion group in that state that was attacked by vandals. In addition, the alleged assailants smashed furniture and painted signs on the walls of the building with threatening messages for the pro-life activists. Officials, congressmen and political leaders from both parties condemn these acts of violence.

REBEKA SMYTH, HOY DIA, TELEMUNDO: Police in Madison, Wisconsin, are investigating a fire set on Sunday inside the premises of an anti-abortion organization. According to authorities, they sprayed a message outside Wisconsin Family Action’s headquarters, that said- “if abortions aren’t safe, neither are you.” Federal investigators have joined the inquiry to find those responsible; they also ask for your help; if you have any information please tell the authorities.

According to a press release issued by Wisconsin Family Action on May 8, 2022, “Anarchy 1312 took responsibility for the attack, leaving its logo on an outside wall”. That information, however, was not offered over any of the above mentioned news reports. Instead, the networks stuck to an anodyne tale of a police investigation of “the fire that broke out”, “a fire set” and “several attacks”.

Mind you, the brief Telemundo and Univision reports on the terrorist firebombing aired exclusively over their morning shows, Hoy Día and Despierta América, respectively. Not a peep on the evening news. Only Estrella TV, which has far fewer viewers than Univision or Telemundo, reported the attack on their evening news edition.

Furthermore, the Wisconsin terror attack served as an addendum to coverage of the pro-abortion protests that took place in front of the houses of conservative Supreme Court justices following a leak from the US Supreme Court pointing to the end of Roe vs. Wade.

The viewers of Estrella TV, though, got to see the reaction of a spokesperson for the Wisconsin pro-life facility who calmly stated that “The people who perpetrated this against us, again, they’re free to disagree with us. But they’re not free to destroy property. They’re not free to threaten individual lives and safety.”

Also, at Telemundo, anchor Rebekah Schmidt encouraged cooperation from the community by closing her report with a call to action: “if you have any information please tell the authorities.”

At MRC Latino we will be looking out for further reports on the arrests of the perpetrators of this intimidating and vicious attack over the Spanish-speaking press. Always watching.

EU Says U.S. Is Profiting From the War
Readers Share Creative Solutions for Chains, Stains, Sprains and More
Dem Congressman Passes Away After Winning Re-Election – Special Election To Be Held
Ford claims No. 2 spot in EVs behind Tesla – but gap remains wide
Gavin Newsom says he wants President Biden to seek reelection: ‘I hope he runs, I’ll enthusiastically support him’