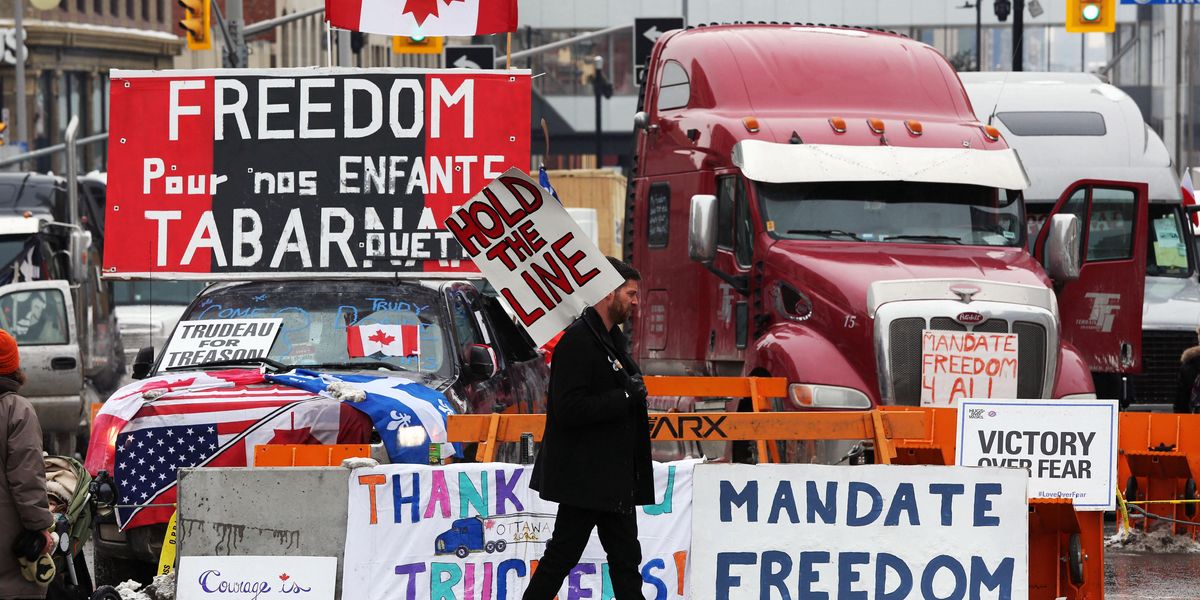 No fewer than four Canadian provinces are set to lift COVID-19 restrictions amid the Freedom Convoy protests.

Hundreds of truckers have gathered in Ottawa in protest of what they say are draconian COVID-19 mitigation measures.

According to a Thursday report from the Associated Press, Alberta, Nova Scotia, Prince Edward Island, Quebec, and Saskatchewan have announced plans to reduce or remove all COVID-19-related measures.

The report noted that Alberta, for instance, “dropped its vaccine passport for places such as restaurants” and is “getting rid of masks at the end of the month.”

“A growing number of Canadian provinces have moved to lift some of their precautions as the omicron surge levels off, but [Canadian Prime Minister Justin] Trudeau defended the measures the federal government is responsible for, including the one that has angered many truck drivers: a rule that took effect Jan. 15 requiring truckers entering Canada to be fully vaccinated,” the news organization noted in its report.

During a news conference this week, protest organizer Benjamin Dichter said that both the government and the media are “drastically underestimating the resolve and patience of truckers.”

“Drop the mandates. Drop the passports,” he demanded.

Trudeau has lashed out at protesters, referring to them as nothing more than a “few people shouting and waving swastikas.”

“Individuals are trying to blockade our economy, our democracy, and our fellow citizens’ daily lives,” he complained during an emergency Parliament session this week. “It has to stop. The people of Ottawa don’t deserve to be harassed in their own neighborhoods.”

On Tuesday night, Alberta Premier Jason Kenney said he believed the threat of COVID-19 “no longer outweighs the hugely damaging impact of health restrictions on our society.”

“Now is the time to begin learning to live with COVID,” he added.

Beginning Wednesday, the capacity limits of under 500 for public venues, libraries, and churches will end, and by Monday, the province will end its mask mandate for schoolchildren.

On March 1, the province plans to remove the indoor mask mandate and more.

“I very much hope that today’s long-awaited announcement gives a sense of optimism,” Kenney said.

He added, “We are well positioned to live with this virus, as we do with many other infectious diseases.”

Salman Rushdie in surgery after he was stabbed in neck and abdomen, police say
Column: Liz Cheney, the GOP’s Joan of Arc?
ABC’s Jon Karl: Biden ‘on a Roll’ Legislatively, Christie Mocks Him
Baltimore’s Top Prosecutor Held In Contempt Of Court
Female ESPN Reporter Announces She Will Transition to Being a Man