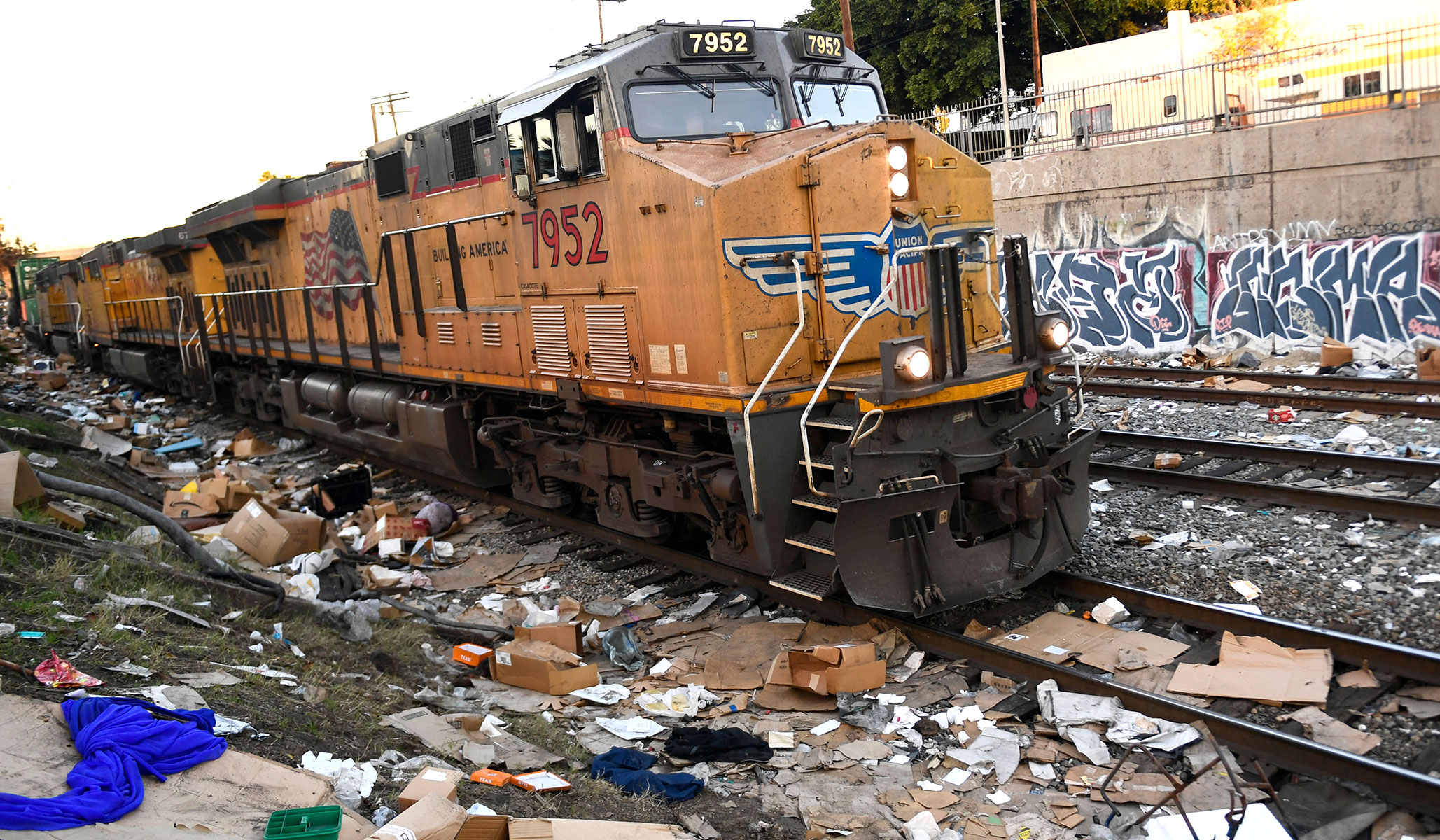 Packages stolen from Union Pacific cargo containers and then ransacked, thousands upon thousands of them, are regularly strewn along the tracks in the Alameda corridor that stretches through downtown Los Angeles. The scene is simply shocking (see, e.g., embedded video posted by the city’s CBS News affiliate).

Why is it happening? Because George Gascón, the paradigm “progressive prosecutor” who is L.A.’s elected district attorney, follows no-bail and wrist-slap policies, with burglary and grand-theft cases routinely pled down to trespassing, with no-incarceration sentences. Reminiscent of the high-crime 1970s, the criminals are back on the street, and back to the tracks, before the cops can finish the paperwork . . . if they bother to make arrests at all, given the pointlessness of the exercise.

In the year ending October 2021, Union Pacific says train robberies are up by . . . wait for it . . . 356 percent. As Forbes notes, the surge is materially contributing to national delivery delays, holding up “retail shipments of everything from at-home Covid-19 tests, fishing lures and parcels from Amazon, REI and UPS.” About 40 percent of goods shipped into the U.S. traverse the train route in question. The Forbes report elaborates:

Thieves can break into stopped or slow-moving cars and pull a kind of hand brake, which slows the wheels. Sensors in the track read this as an equipment breakdown and stop or slow the train to a crawl. At that point, individuals can use bolt cutters to open up cars and grab items quickly. What they don’t want is left on the sides of the track to blow in the breeze and slowly rot in the southern California sun.

The train ambushes are just one part of the epidemic of robberies and retail organized crime plaguing California — not just in Los Angeles, but in San Francisco, and other commercial hubs.

Obviously, Gascón and, in general, California’s state government are disastrous. But what is the federal government doing about this? In many crime situations, the feds can seem superfluous, muscling in on matters that are chiefly local concerns. Here, however, we are talking about interstate and international commerce, the very foundation of federal criminal jurisdiction.

If addressing this outrage is a priority of the Biden administration’s interim U.S. attorney, Tracy Wilkison, that is not evident from her office’s website (which catalogues press releases issued in recent cases that the office deems its most significant) or its Twitter feed. If we visit the Twitter feed of the FBI’s Los Angeles office, we are urged to provide any information we may have about the Capitol riot, and we are reminded that Martin Luther King Jr. once said, “Life’s most persistent and urgent question is, ‘What are you doing for others?’” But we are not told what, if anything, the bureau is doing about the train robberies.

I certainly hope the feds are staying mum because they are building big cases and need to maintain investigative secrecy. There are a number of federal penal statutes that apply to stolen-property schemes. One would think that, if the Justice Department can invoke such statutes when a diary belonging to the president’s daughter goes missing, then those laws might get a workout in a genuine stolen-property crisis.

The people of Los Angeles elected Gascón, so it is fair enough to observe that they are getting the kind of law “enforcement” they voted for. But the train robberies are a national problem that has ramifications throughout the economy — and the country is now having them at a time of rising inflation and empty store shelves. It is for such challenges that we have federal law enforcement. The feds do not need state or municipal permission to act — they can move on their own initiative, and in contravention of the woke prosecutors’ nonenforcement approach.

The Biden administration owes the public an explanation of what it is doing to end this dangerous and embarrassing siege.