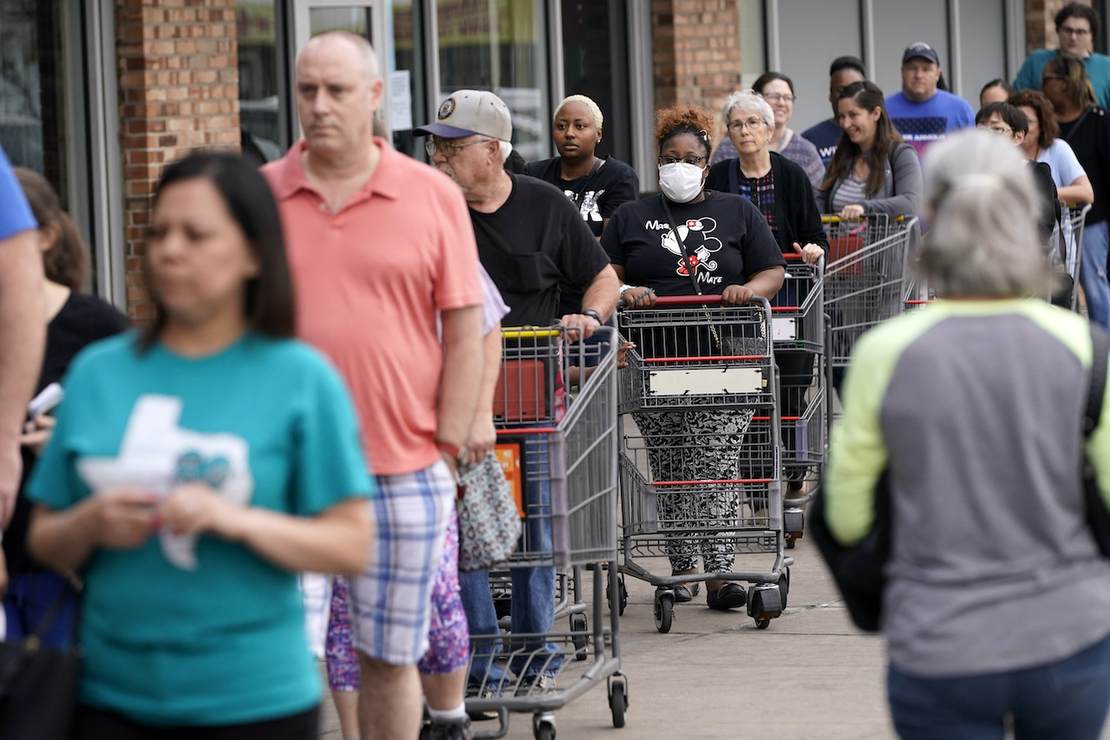 Perhaps you’ve had difficulty finding cream cheese at your local Wegmans or can’t seem to buy paper towels at Kroger.

Whatever your shopping woes are, you certainly aren’t alone.

Empty grocery store shelves made their debut to Americans in March 2020, and most stores ended up recovering from the panic buying a few months later.

Unfortunately, there is a cause for concern once again amid the ongoing supply chain crisis.

Not only has social media been ablaze with people posting photos of barren shelves, but there is tangible evidence of a major problem.

According to Bloomberg, labor shortages resulting from people calling out sick from the omicron variant are contributing to the issue at large.

Most importantly, the report suggests that people choosing not to work, even if they do not have the virus, is fuel to the fire.

“The manufacturers can’t get labor,” he added.

And although the civilian labor force participation rate is slowly recovering from the start of the pandemic, it still has yet to return to pre-pandemic levels.

In February 2020, it was 63.4 percent, whereas it’s now only 61.9 percent, according to the United States Bureau of Labor Statistics.

Of course, it goes without saying that it is difficult for the economy to function when leaders have served up fear with a side of government handouts.

Nationwide, there were 7,000 more workers filing unemployment claims last week compared with the week prior. That makes for roughly 207,000 claims, which was much higher than the 195,000 estimate, CNBC reported.

While it’s clear that a bulk of those workers legitimately lost their jobs, it is worth asking how many people have decided to call it quits altogether.

You can’t blame them, either. Many people have figured out that they can earn more money by relying solely on taxpayer dollars than holding down a job, especially if they have an apocalyptic view of the virus.

If someone is healthy and does not have co-morbidities, there are limited excuses not to return to work.

Still, President Joe Biden and his liberal lackeys across the country have been completely tone-deaf to the issue at large.

Secretary of Transportation Pete Buttigieg said nothing notable when issues with cargo ships in California ports arose until late December, when he allocated $241 million for vague infrastructure projects, PBS reported.

Then Democratic Atlanta Mayor Keisha Lance Bottoms won the out-of-touch award for her confusion about food shortages last week after complaining about her local Publix on Twitter.

“I’ve received 8 messages & counting from my very polite @Instacart shopper over the last 10 minutes about missing items in the Cascade Rd @Publix. I shopped in Buckhead & Vinings last week and no one else seems to have the supply chain issues we’re experiencing in SW Atlanta,” she tweeted.

Shortly after, the grocery chain decided to give the mayor a reality check.

“Hi Keisha. The supermarket supply chain is under a lot of stress, impacted by product and labor shortages, demand, record exports, shipping constraints, and inflation,” they replied. “We appreciate your understanding as we work to obtain as much product as possible for our customers.”

Hi Keisha. The supermarket supply chain is under a lot of stress, impacted by product and labor shortages, demand, record exports, shipping constraints, and inflation. We appreciate your understanding as we work to obtain as much product as possible for our customers.

These shortages will only limit the options Americans have for products.

As Democrats are currently at the helm in Washington, they are in for a rude awakening when they find out whom Americans are blaming the shortages on.