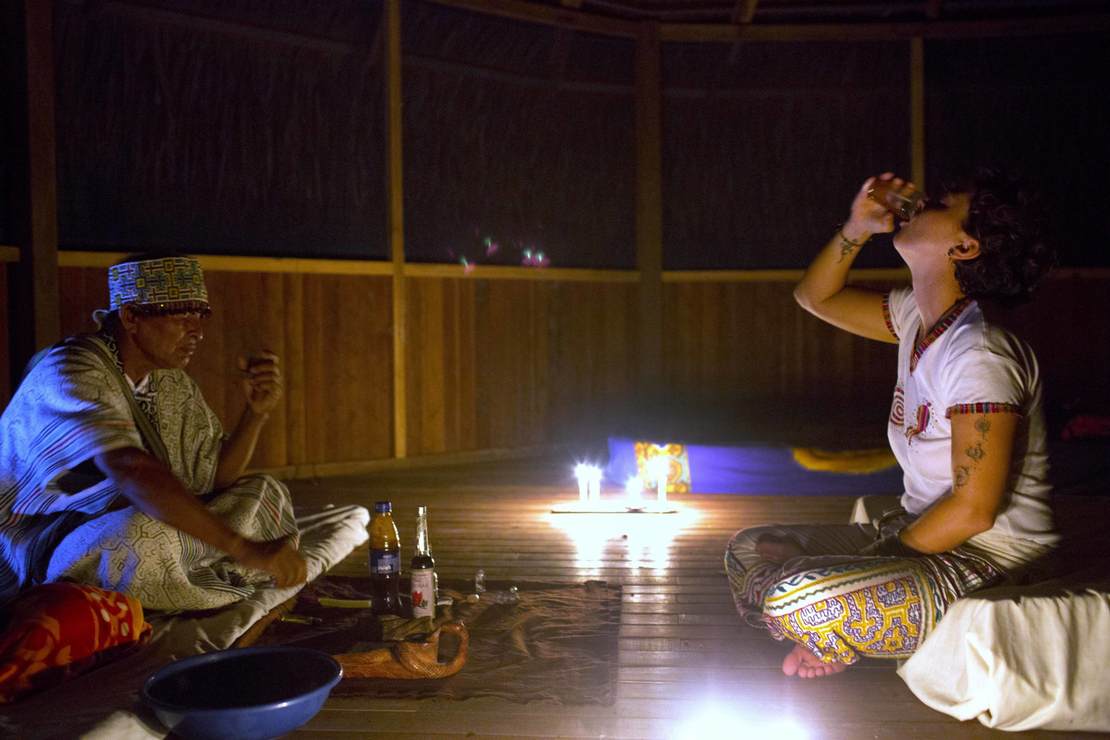 Ever since Rush Limbaugh left us, I’ve turned to podcasts to fill the void. A departure from politics seemed to be what I needed to get through the massive three-hour hole in my day. I began to listen to true-crime content like Up and Vanished (which is an excellent show) and To Live and Die in LA (also very good) and then branched out to some documentary-style stories like Welcome to Your Fantasy, which detailed the rise and fall of the Chippendales (did you know there was a murder plot involved?). But most recently, I’ve tuned in to the New York Magazine’s “Cover Story: Power Trip.”

This is the story of Lily K Ross Ph.D., a Harvard Divinity School student, highly educated and equipped with all the feminist education one could hope for. Ross set out for the Amazon, alone, to study with a shaman in a remote village and work on a project for a nonprofit that equipped indigenous villages with media equipment and training. Ross had been in the psychedelic research field for years, experimenting with hallucinogenics for the healing of trauma and other psychiatric conditions. This field of study has shown some very promising results, especially in the area of PTSD. Because of the positive results that some psychedelics can have on trauma and addiction, psychedelic tourism has exploded in places like the Amazon, where local shamans administer ayahuasca in healing ceremonies. But these ceremonies are unregulated and, as Ross found out, can be dangerous. The Cut published a very extensive article about Ross’s experience and the booming industry that is psychedelic tourism.

There’s no official count, but some experts estimate that there are now hundreds of spiritual centers offering ayahuasca ceremonies throughout South and Central America, many of which are booked months in advance. “Tourism went from something that was very sporadic, very low-key backpacker tourism, to a flourishing industry with a lot of competing lodges,” anthropologist Daniela Peluso told me. Ayahuasca rituals have become an expected part of the South American itinerary for a certain type of traveler: today, river rafting; tomorrow, a transcendent drug experience.

What happened to Ross when she got to her destination is horrifying. The shaman asked her to strip down to her underwear for a cleansing ceremony. He then brushed her body with some sort of liquid medicine called Brugmansia. Because he did this to others, Ross talked herself into thinking it was okay. She was the only female, however. Afterward, she was told to get dressed and wait thirty minutes. During that time, the liquid, which was a potent drug, took hold and Ross found herself almost paralyzed.

“I knew in the back of my mind that you’re not supposed to take your clothes off and go into the private place with the shaman for the healing — that’s how creepy things happen,” she told me later. “But then having seen him do these baths with these men, I was like, All right, I think I can actually trust this.”

Brugmansia is known to have qualities that make a person exceptionally suggestible. It was during this time that the shaman returned and implanted the idea into her vulnerable mind that Ross was in love with him and was going to stay in the Ecuadorian village with him and have his babies. Ross reports that he raped her at least six times during her stay in the village.

Whenever Ross felt a red flag or a prick of fear she would suppress it and instead repeat the mantra that all universities teach American kids: “Do not let your Western-morals framework impinge on the practices of other people.” This is a dangerous philosophy brought to us by feminists and others on the woke left who want us to ignore our basic animal instinct to survive in order to be politically correct. Do indigenous women have such hangups about their own safety? According to the report in The Cut, the answer is a definitive no.

But most indigenous women won’t drink ayahuasca with a shaman they don’t know unless they’re accompanied by a family member or friends…Peluso, the anthropologist, told me that having sex with someone who is incapacitated is not acceptable in a local context, and that it was also “not normal” for the shaman to tell Ross to take off her clothes for the plant bath: “No indigenous woman would ever let a man do that.”

Why are Western women so susceptible to this kind of assault? I blame university professors and feminists who go after every form of “be careful with your life and body” advice as “victim-blaming.”

“Sexual assault is not acceptable [in Amazonian cultures]. But there’s a kind of sexual harassment that is considered — I don’t want to call it normal, but in the range of possibility,” she told me. “Local women see shamans as men, as humans, as flawed beings. Western women go down there and they don’t understand this, and on top of it, a lot of them think these shamans are like gods.

The local women of Ecuador recognize what feminists do not. Men are flawed. Danger is everywhere. It’s better to be with a group than on your own. Don’t let a shaman get you naked. These are basic truths that Western women should know, but they don’t because the left has made it a sin to understand the true nature of what it means to be a woman. They’ve scoffed for years at the idea of the “weaker sex” and insisted that anything men can do, women can also do with the same amount of confidence and safety. Except it’s just not true. There are no stories of men being raped or groped on ayahuasca trips. This is an experience that is unique to women, especially Western women who have been spoonfed a dangerous ideology. Our women have been taught to drop their defenses, to trust that they are equal to men. Hell! We tell them that a 5’4″ woman can kick the crap out of a 6’3″ man who is twice her size and full of muscles. We see it in the movies every day. It’s a fantasy.

I quoted Camille Paglia, noted sane feminist, in my book “Believe Evidence: The Death of Due Process from Salome to #MeToo about this very subject. “Misled by the naive optimism and ‘You go, girl!’ boosterism of their upbringing, young women do not see the animal eyes glowing at them in the dark…They do not understand the fragility of civilization and the constant nearness of savage nature.”

The truth is that the majority of women are and always will be at a physical disadvantage in comparison to men. Your safety is your responsibility because when you end up alone in a dark room in a foreign country with a bad man, it won’t matter how many times you’ve read “The Feminine Mystique.” That bad man is going to rape you if he wants to and there’s nothing you can do about it at that point.

Prevention is worth way more than a cure. Girls, be smarter than this. I wish Ross had listened to her inner voice. Never ignore that voice. The first rule in self-defense is to always, always listen to that voice that says “get out of here” and “this is not normal.” Do not be nice. Do not care if you hurt someone’s feelings, or upset them, or insulted them or their culture. Get out first and ask questions later.

I’m glad Ross survived to tell her story and I hope that it will be a warning to others that your safety should be your number one priority whether going on a research trip in the Amazon or out for drinks with friends. Be aware, don’t go alone, get trained in self-defense, watch your drink, don’t allow anyone to give you anything you haven’t agreed to take (and if you’ve agreed to take it you’d better know what’s in it, what the dosage is, and be under competent supervision), and listen to that voice that will save your life if you don’t ignore it.

As for the psychedelic revolution, I still think there are worthwhile scientific purposes to continue the pursuit of it and other alternative medicines. If you are planning on trying this, don’t go alone, and seek out clinical situations that are monitored by doctors or other medical professionals. Strangely enough, one organization tried to create medical spaces that adhered to voluntary safety standards for women and they were driven out of business by accusations of “cultural appropriation.”

In 2013, an international nonprofit consultant and newly converted ayahuasca enthusiast named Joshua Wickerham founded an organization called the Ethnobotanical Stewardship Council, which crowdfunded more than $20,000 to create a list of approved ceremonial centers that voluntarily abided by designated safety principles — particularly with regard to sexual assault. But nearly as soon as it launched, the ESC, whose promotional materials featured a blend of New Age lingo and the bureaucratic language of international development (“holding space,” “multi-stakeholder consensus,” “ayahuasca value chain”) faced a backlash. A letter signed by a number of academics and Amazonian specialists claimed that “the ESC’s lack of on-the-ground experience is apparent, the ethnocentricity of the project is alarming, and the assumption that they know better than the locals how to manage ayahuasca is unfounded.”The ESC soon disbanded.

This is maddening. Instead, the psychedelic community has mostly agreed that women need to take care of their own safety and “bring a friend, preferably a man, to watch their backs.” Common sense that your grandmother taught you turns out to be a lot cheaper and more useful than whatever they’re teaching at Harvard Divinity School.