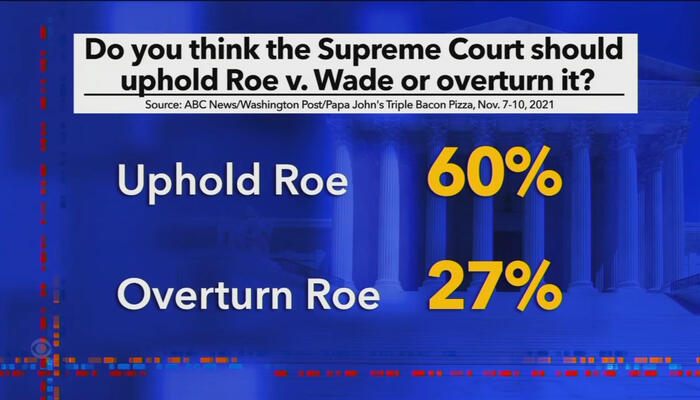 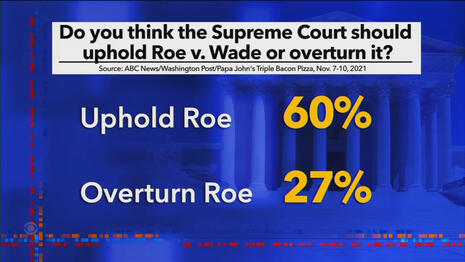 Scratch a liberal and find an authoritarian. The latest evidence of this has come as the Mississippi abortion law reaches the Supreme Court. And right on cue, the lefty media types quickly stood up with anti-democracy rants.

The problem, you see, is that the Mississippi law was passed by — oh the horror! — the elected representatives of the people of Mississippi. Which is, newsflash, how a democracy works.

Over there at CBS, “comedian” Stephen Colbert was furious. His resource? A poll that says support for Roe v. Wade is at 60% in favor, 27% opposed. Suffice to say, the people of Mississippi, not in a poll but through their elected…say again, that word is elected…state legislators disagree. But Colbert ranted this:

That’s more than two to one (in the poll). So if it is this unpopular, why is everyone saying it’s gonna happen? Well, I don’t want to get too technical, but — what’s the word — we don’t live in a democracy. Five of the nine justices were appointed by presidents who lost the popular vote; the last three confirmed by a Republican Senate who now represent 41 million fewer Americans than the Democrats. In fact, Republican senators haven’t represented a majority of the U.S. population since 1996. A lot has changed since 1996. Back then, the Oscar for Best Supporting Actor went to Kevin Spacey—and the Best Director was Mel Gibson.

And the Republicans have their nominees. Gibson/Spacey 2024: Still better than Ted Cruz.

As NewsBusters’ own Kristine Marsh has noted, after mocking CNN for their coverage Colbert added that “We also heard from a slightly less trusted body: The Supreme Court.”

The media hysteria about a potential overturning of Roe was evident at MSNBC and CNN as well.

The issue the liberal media doesn’t want to touch here is that time after time in history, judicial activists on the Supreme Court bench persist in ignoring the Constitution in favor of writing in their own political prejudices. Examples abound.

1857– Chief Justice Roger Taney, a Maryland slave holder appointed to the bench by President Andrew Jackson, used the famous Dred Scott v. Sandford case to try and write the right to slavery into the Constitution. Why? Because, to quote the late Judge Robert Bork, Taney, a slave holder himself, “was passionately convinced it must be a constitutional right” – so he tried to make it one. The decision was overturned as a result of that minor scuffle known as the Civil War and, in 1865, passage of the 13th Amendment to the Constitution that ended slavery for good.

1896 – Justice Henry Billings Brown wrote the infamous Plessy v. Ferguson decision that gave approval to something else that was not in the Constitution: segregation. The decision launched Democrats into writing an onslaught of “Jim Crow” laws that segregated everything from schools to public accommodations like restaurants, beaches, libraries and more. Plessy lasted as “precedent” for 58 years until overturned by another Brown – Brown v. Board of Education – in 1954. Which is to say, there is precedent for the Supreme Court to overturn one of its long-ago decisions that was badly and wrongly decided. Like Roe.

1944 – Justice Hugo Black, a former Alabama Senator with a lifetime membership in the Ku Klux Klan and an FDR appointee, wrote the also infamous Korematsu v. United States decision that gave a thumbs up to FDR’s executive order setting up internment camps for Japanese-American citizens. In 2018, Chief Justice John Roberts officially stated the obvious: “The forcible relocation of U.S. citizens to concentration camps, solely and explicitly on the basis of race, is objectively unlawful and outside the scope of Presidential authority.”

In his 2005 book Men in Black: How the Supreme Court is Destroying America, Mark Levin adds Roe v. Wade to this list of activist bad precedents.  Understandably so.

The simple fact here is that liberal media personalities simply reject democracy when they, like the activist judges above, realize their political view on an issue is quite possibly not shared by a majority of Americans.

Thus the public moaning from Stephen Colbert, Whoopi Goldberg, and various hosts and guests at MSNBC and CNN about a potential overturning of Roe. This is about nothing more than a cry for an authoritarian, anti-democratic America. An America where a group of liberal elites refuse to try and enact their views on abortion into legislation or a constitutional amendment passed by elected legislators who are responsive to their constituents.

And they refuse the legislative process for a reason: they are afraid they will lose.

Project Veritas Publishes Damning Military Documents on the use of Gain of Function in Creating the Fauci Flu
Yes, It Sure Looks Like Vladimir Putin Is Calling Biden’s Bluff
REPORT: A Year Into His Term, Biden Backers Are Not Happy
Your States, Your Cities
[WATCH] Kruiser’s ‘Beyond the Briefing’—Enough With the Conservative Victim Drama on Social Media