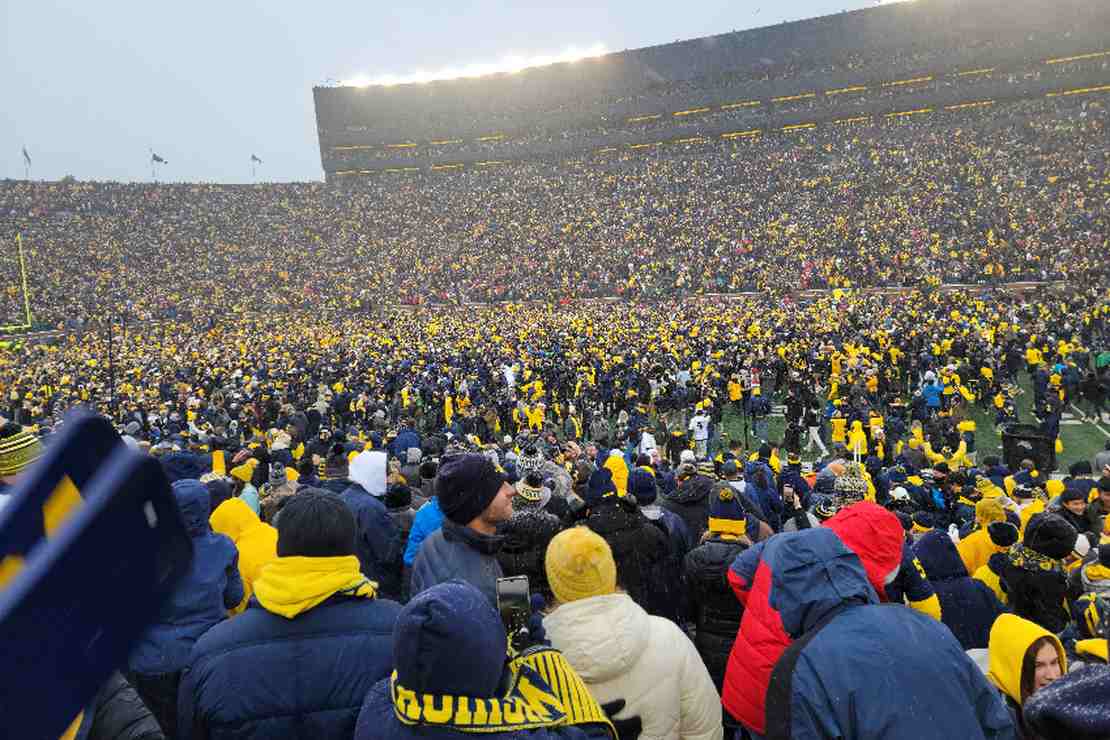 This took me by surprise.

I’m not one of those 21st-century people who is constantly lamenting what the internet, social media, and technology, in general, have done to our lives. I think that there has been far more good than bad and that the people who are jerks on social media didn’t suddenly become that way. They’ve always been unlikeable–all Twitter did was let everyone know about it.

Despite being a fan, I have also been a big proponent of taking the occasional break. I tend to bail on social media over the weekend unless there is some sports-related reason to hop on and talk a little trash.

That’s planned time away from it all, however. Rarely do I have a social media/technology blackout thrust upon me.

Last Saturday I got to attend the Ohio State/Michigan game in Ann Arbor and ended up spending a good chunk of the day in a tech black hole. We began tailgating at 9:30 AM, and I wanted to share some of the fun and madness with my friends on social media, of course. Just as the first Bloody Mary was kicking in, I tried to post a couple of pics to Twitter and Instagram. To my surprise, I had no service whatsoever. It was as if I were out in the middle of the desert rather than surrounded by a hundred thousand people.

It turns out that Ann Arbor’s cell tower situation groans on University of Michigan football game days. This is a small city and its population increases significantly when there are 110,000 fans at the Big House. Fellow tailgate-goers assured me that nothing was wrong and that none of them had service either.

I was able to get a little service once we got into the stadium and did manage to get one picture posted online. I soon realized, however, that I was enjoying being off the social media grid and decided to just go with it. Admittedly, I did reach for the phone a few times during the first half but quickly put it away. I left it in my pocket all during the second half and didn’t take it out until the game was over and it was picture time.

We went back to the tailgate after the game and by then I was really enjoying my modified version of being off the grid.

Yes, I was surrounded by a lot of people, so it wasn’t exactly like I was on a silent retreat at an ashram. What I wasn’t doing, however, was ignoring those people every couple of minutes to check my phone. I was being more polite. I was present.

And it was relaxing.

I might have to turn that sucker off for a few hours every weekend now.

Jen Psaki unable to defend president’s ‘week from hell.’ Peter Doocy asks what happened to Biden’s ‘decades of DC experience?’​
To End Abortion, Changing Hearts Is Even More Important Than Changing Laws
Ghislaine Maxwell to be sentenced end of June as defence continues to call for re-trial
Michigan AG Dana Nessel Suggests “White Supremacy” to Blame for Texas Synagogue Islamist Attack
One year on from getting the keys to the White House, how has Joe Biden fared as US president?