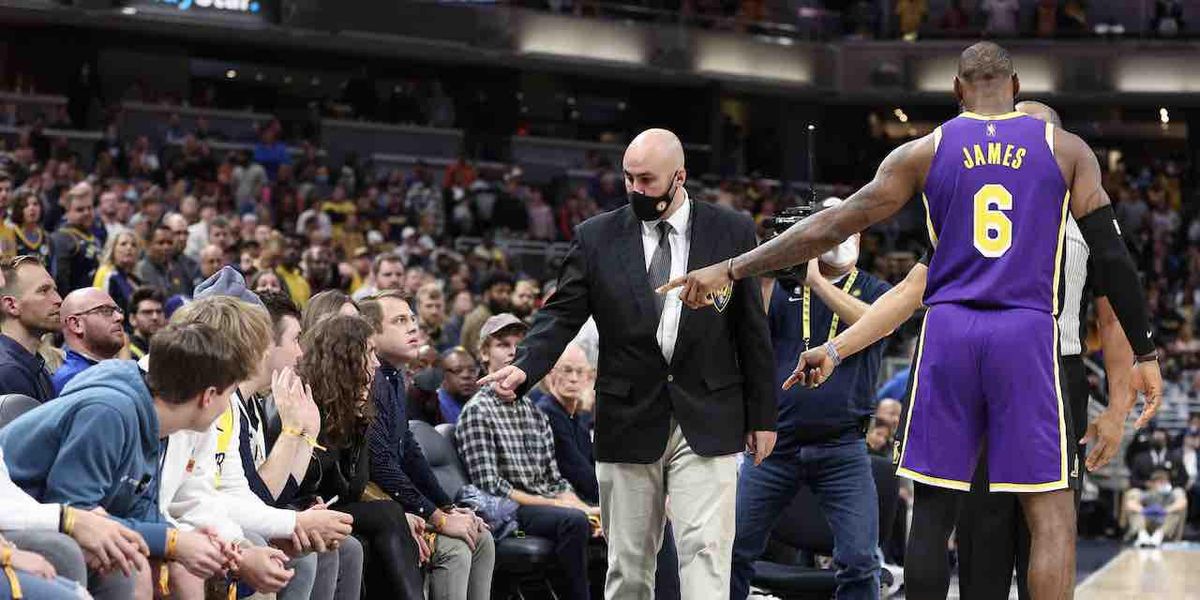 Has NBA superstar LeBron James been getting triggered of late?

Since
he got his backside handed to him on Twitter for mocking Kyle Rittenhouse’s tears on the witness stand earlier this month, James seems to have been just a little bit on edge.

About a week after his Rittenhouse tweet,
James got annoyed at Boston Celtics’ center Enes Kanter for wearing shoes depicting James bowing to Chinese President Xi Jinping, who places a crown on James’ head:

Boston Celtics player Enes Kanter wore sneakers tonight u2014 while playing against the Lakers u2014 with LeBron James bowing down while Chinau2019s dictator puts a crown on his head.pic.twitter.com/E1L4ZyPWrF

Kanter has publicly criticized brutal regimes like China — and also has taken aim at James, who
has a highly lucrative endorsement deal with Nike.

Before the game, Kanter posted photos of his shoes on Twitter and wrote the following message to James: “Money over Morals for the ‘King.’ Sad & disgusting how these athletes pretend they care about social justice. They really do ‘shut up & dribble’ when Big Boss says so. Did you educate yourself about the slave labor that made your shoes or is that not part of your research?”

James replied after the Celtics’ victory over the Los Angeles Lakers that Kanter “always kind of had a word or two to say in my direction, and as a man, if you got an issue with somebody, you really come up to him. He had his opportunity tonight. I seen him in the hallway; he walked right by me.”

James ejected, fined for ‘some bulls**t’

A few days later James received a one-game suspension after striking and bloodying the face of Detroit Pistons’ Isaiah Stewart:

James later referred to the suspension as “some bulls**t,” Reuters reported, after which the league publicly warned him against “using profane language during media availability.”

The outlet said James’ one-game ban kept him off the court against the New York Knicks, who beat the Lakers 106-100 Tuesday.

The very next day James was back in action in a road game against the Indiana Pacers — and James’ troubles began where they left off.

But this time King James was upset at heckling fans rather than opposing players.

So upset, in fact, that he dragged a referee over to a couple sitting in the front row, pointed them out, and seconds later security was escorting a man and woman from the arena.

And Twitter ripped James — mocking him as “LeSnitch” and “LeKaren” for his crybaby antics:

LeSnitch back to his old tricks! He’ll call fouls on people who aren’t even in the game, cry to the officials. It’s what he does. He whines to the league when things don’t go his way. Nuggets fans remember what happened in the playoffs.https://twitter.com/TheNBACentral/status/1463701744358150150u00a0u2026

The unnamed spectators seemed to take it well — the contest was almost over anyway:

But that wasn’t all.

Prior to James getting the spectators ejected — which occurred during overtime — he made an obscene gesture with just over a minute left in the fourth quarter after draining a 3-point shot that gave his Lakers a six-point lead.

The following is video of James making the gesture for all the Pacers’ fans to see:


LeBron James Does a WILD CELEBRATION after Hitting DEEP CLUTCH 3

Maybe that’s what the soon-to-be-ejected fans were annoyed about.

Anyway, the NBA was upset, too, and fined James $15,000 for the gesture, which NBC Sports said was a “big balls” dance made famous by former NBA player Sam Cassell.

Maybe LeBron had a chance to chill over Thanksgiving.

NBA Golden State Warriors’ Co-owner Says ‘Nobody Cares’ About Persecution of Uyghurs. Is He Right?
It’s Time to Re-Institutionalize the Dangerous Mentally Ill
Huh? Procter And Gamble Says Shoppers Were Unphased by Huge Price Jumps
Your States, Your Cities
The LGBTQ Cult Is Coming for Your Kids