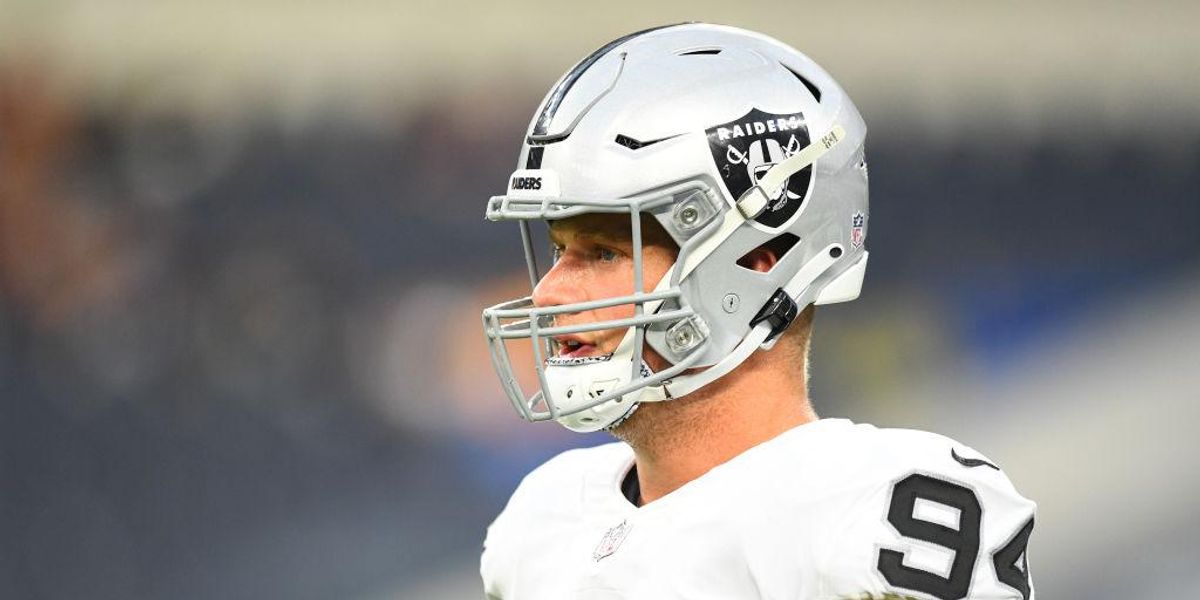 Nassib’s sack-strip wasn’t spectacular. He rolled around the left side of Baltimore’s offensive line after a stunting defensive tackle washed two Ravens linemen inside, freeing Nassib to blow past an overmatched running back. Nassib hit Jackson from behind. The ball popped out, and one of Nassib’s teammates recovered it. The defensive play design had as much to do with the sack as Nassib did.

That’s not said to diminish his effort or his performance. Injuries forced Nassib into the playing rotation, and he delivered the most important play of the game.

Here’s what’s odd and a potential sign of progress.

Nassib won the game, and ESPN, the Worldwide Leader in Sports, didn’t treat the moment like a moon landing, which is one big step for mankind. In fact, ESPN appeared to mostly ignore Nassib’s sexuality. I watched ESPN’s Peyton and Eli Manning special broadcast of the game. I never heard the topic broached among the Mannings or their guests. Although Charles Barkley wore a Nassib jersey on the broadcast. I asked friends who watched the normal “MNF” broadcast, and they said Steve Levy, Brian Griese, and Louis Riddick did not dwell on Nassib’s sexuality.

Last night and Tuesday morning when I checked ESPN.com, Nassib was not prominently mentioned. This is odd. It appears ESPN went out of its way to downplay Nassib’s sexuality.

Let’s think this through. The network that showed Michael Sam kissing his boyfriend on a 24-hour loop in 2014 isn’t leaning into Nassib making a game-winning play on Monday Night Football. Sam, of course, was the University of Missouri defensive end the Rams selected on the final day of the draft in the final round.

A year after Sam’s draft kiss, ESPN named long-retired, former male Olympic decathlete Caitlyn Jenner the most courageous athlete of the year for telling the world she felt like a woman trapped in a male body.

It was just a few years ago that ESPN was gloating in media circles about its ability to turn the Gruden-led “MNF” broadcast into a shrine for diversity and inclusion.

Something is right with this picture. I suspect it’s Carl Nassib. Apparently he legitimately has no interest in allowing the media to exploit his sexual desires. This is progress. Nassib wants to be judged as a football player, not by what arouses him sexually. I suspect Nassib and the Raiders asked ESPN to avoid making his sexuality part of the game narrative.

Most people who define themselves by their sexuality — whether straight, gay, or bi — have little of value to offer the world beyond their sexual organs and identities. The hyper-promiscuous straight jock is intellectually and spiritually bankrupt.

I do think ESPN underplayed Nassib’s big night. It’s a positive feel-good story. His teammates clearly don’t care all that much about his sexuality. They celebrated his big play with the same enthusiasm as Derek Carr’s game-winning touchdown pass.

Nassib isn’t the first gay player to be accepted inside an NFL locker room. Nor is he the first to make the most important play in a huge game.

There is value in Nassib sharing his sexuality. His success on pop culture’s most masculine stage, the NFL, makes it less likely that young men who don’t fit traditional masculinity standards will be ostracized and bullied.

That’s not an endorsement of homosexuality. It’s an acknowledgement of necessary, healthy progress. Our society tolerates all sorts of sexual sin. It’s a horrific mistake to single out one form of it for demonization while celebrating other forms that damage the nuclear family.

The demonization and hostility cause a backlash that leads ESPN to give Caitlyn Jenner awards for the work of Bruce.

Was Sodom Destroyed by a Meteor?
Democrats Can’t Hide Their Israel Problem
Whatever Happened to Those Pro-Democracy Protests in Cuba?
How Israel Assassinated an Iranian Nuclear Scientist with a Robot Machine Gun
FDA Authorizes Pfizer Covid Booster Shot for People 65 and Older and “High Risk” Americans