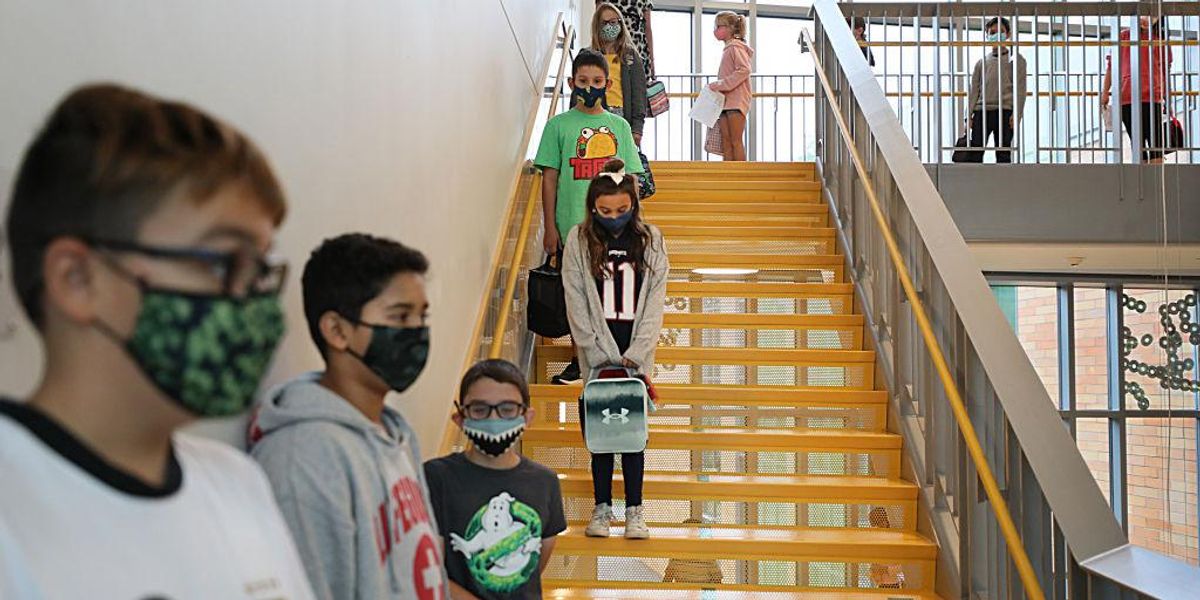 It’s become a living parody. Every time there is a study or World Health Organization guidance that raises concerns or counters the narrative of COVID fascism, it is retracted and changed the minute it is cited by panic skeptics. We all joked on the day that a German study raising concerns about CO2 levels in children wearing masks was published in JAMA that the editors must have had the day off. Well, to our surprise, it did take 16 days for them to retract it, which means they really had trouble finding anything wrong with it.

The results of the German study could not be allowed to stand because rather than just attack the efficacy of masks, it raised questions about serious side effects. In a randomized controlled trial of 45 children wearing masks, the researchers found that CO2 levels increased to levels deemed unacceptable by the German Federal Environmental Office by a factor of 6 after just three minutes.

On July 16, the two editors of JAMA issued a retraction with a one-paragraph explanation. “Following publication, numerous scientific issues were raised regarding the study methodology, including concerns about the applicability of the device used for assessment of carbon dioxide levels in this study setting, and whether the measurements obtained accurately represented carbon dioxide content in inhaled air, as well as issues related to the validity of the study conclusions,” wrote editors Dimitri Christakis and Phil B. Fontanarosa.

They never divulge who raised those issues or extrapolated on the details of their concerns. They claim that in their response to the criticism, “the authors did not provide sufficiently convincing evidence to resolve these issues, as determined by editorial evaluation and additional scientific review.”

Are we really to believe such vague concerns in an era when any criticism of masks and spike protein vaccines being censored? Notice they never offer any specific concerns about the study’s conclusion, which is pretty intuitive. As I cited in my write-up of this study three weeks ago, numerous other studies of health care workers wearing masks long before COVID-19 showed similar results. Yet, one can always find ways to quibble with methodology in a way that doesn’t refute the results.

But on whom should the burden of proof be? It’s not like anyone else is conducting a study using the “proper” methodology. Why is it that the other side can force our children into doing novel and dangerous things, such as experimental shots and covering their breathing orifices without their “experts” having to prove conclusively that these practices are safe? Hasn’t that always been the standard in science and medicine?

As Harald Walach, the lead author of the German study, said in response to the retraction, “The measurements, we contend, are valid and were conducted by individuals with high content expertise. … If someone doubts our results, the way to go is not to claim they are wrong without proof, but to produce better and different results.”

It is extremely hard to ever categorically prove an assertion, especially to a specific degree. There is quite literally no study we can produce on masks, lockdowns, or the experimental shots that could not elicit some sort of speculative shortcoming with the methodology. Yet, their side is able to continue publishing conclusions based on completely ridiculous speculation dressed up as the scientific method.

While these same publications rejected the only randomized controlled trial on the efficacy of masks against COVID, they have no problem publishing ridiculous opinion pieces disguised as science. For example, they will publish observational studies of masks with arbitrary start and end points, mannequin head “simulation” studies that measure very large droplets rather than micro particles in the real word, or simple mathematical models assuming masks work and therefore proving how many lives they will save.

Since 2016, the Oral Health Group had an article (archived here) on its website titled, “Why face masks don’t work: a revealing review.” Now it’s is scrubbed from the website with a simple message: “The content was published in 2016 and is no longer relevant in our current climate.” They never explain what is wrong with the paper, which had 36 citations and was very well researched. If anything, the fact that this was published while masking was still an academic question and before it became a political issue makes its findings all the more relevant.

Last April, University of Minnesota professors wrote a paper on the website of its Center for Infectious Disease Research and Policy (CIDRAP) noting that data analysis does not support mask-wearing as source control for respiratory viruses, an assertion that turned out to be prophetic a year later. On July 16, they posted a note that they “have received requests in recent weeks to remove this article from the CIDRAP website because, among other reasons, “the article is being used by individuals and groups to support non-mask wearing where mandated.”

In November, a long paper from Dr. Baruch Vainshelboim was published at NCBI detailing all of the literature on the side effects of mask-wearing. It sat there for months without a problem, but when mask opponents started citing it in the spring, it was immediately retracted. Aside from some very superficial points that have no bearings on the conclusion of the paper, their main objection was that it didn’t fit the narrative. “A broader review of existing scientific evidence clearly shows that approved masks with correct certification, and worn in compliance with guidelines, are an effective prevention of COVID-19 transmission,” wrote the editor-in-chief in a May 12 retraction notice.

There you have it! So long as the scientific conclusion goes against a policy favored by those in power, it must be retracted! No matter how many cases Japan suffers and is forced to prohibit spectators at the Olympics, the country’s obsession with mask-wearing can never be questioned.

We have to bat 1.000 every time (and only in their estimation), yet they are free to strike out all they want and still force their assumptions on our bodies.

They are not even embarrassed to retrospectively retract any statement that goes against a new hotness in COVID panic world. We saw this with the World Health Organization in June when conservatives began citing a WHO guidance that “There is not yet enough evidence on the use of vaccines against COVID-19 in children to make recommendations for children to be vaccinated against COVID-19.” That statement was on their website for months, yet within hours of conservatives citing it on social media, the WHO changed the wording to the following: “it is less urgent to vaccinate them than older people, those with chronic health conditions and health workers.”

We also saw numerous times over the past year how CDC flipped its stance and dragged its feet numerous times on school reopening after its own literature showed schools were not responsible for spread. The teachers unions always got them to walk back some of their guidance.

The same holds true for the American Academy of Pediatrics, which originally advised very strongly that children should have never been barred from in-person classes to begin with before last school year. The minute the pressure was brought to bear on them, they flipped and now they are even ahead of CDC – advising the masking of even vaccinated children.

When it comes to the scientific and academic worlds, they are now run just like the streets of Chicago with the survival of the strongest players on the blocks dictating policy.

Isn’t it interesting how the initial science always says one thing, but the political science always forces the retraction into one direction? Which is why it’s always so important to divulge who was behind the campaign for retraction, a fact that JAMA declines to reveal in the case of the German CO2 study.