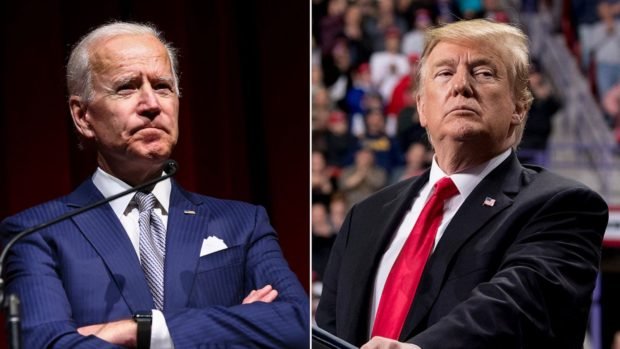 Joe Biden and President Trump held dueling rallies in Minnesota today. Biden’s rally was before people in cars and they were honking horns when he spoke.  Wearing dark aviator glasses and standing before a huge sign that said “Soul of a Nation”, Biden was not “sleepy Joe” this time but an angry belligerent Joe yelling and screaming his message out sounding like an angry parent scolding his kid who just broke his prize possession. Yelling and screaming so angrily as he did is a sure sign of dementia, like people have alleged. Maybe he was trying to get over the reputation of “Sleepy Joe” that Trump put on him. It was more than just trying to talk over the sound of the horns.

In his tirade, Joe said how Trump said you don’t have to serve to be commander in chief,  “That is a blatant  lie,” Biden said, “No president has ever done that.” Hey Joe I guess you forgot that your guy Obama never served and Clinton never served.

Biden has told his followers to prepare for a dark winter under Trump and other doom and gloom fantasies and that he (Biden) plans to change the course of America for generations to come. Yeah Joe, like packing the court and raising our taxes after Trump lowered them and opening our borders bringing in all kinds of illegals and jihadists and other nefarious deeds.

Biden is getting worse and worse each day. There isn’t a day that does not go by where he doesn’t say a major gaffe. He gets confused and mixes people up. He couldn’t remember Romney’s name and called him that Mormon guy.

I would never want to see a president who displayed the anger that Biden did at his rally. At the end of his rally Biden took his glasses off and it was just two slits, you couldn’t even see his eyes, truly scary. It is time to retire Joe and go back to your basement after the anger you displayed or maybe it is time you were committed to a hospital for observation.

Meanwhile, Trump held three rallies today one in Wisconsin, one in Mich. and one in Minn. The rallies in Wisconsin and Mich. were before 20-30 thousand people each cheering and saying” We love you” to Trump. By the time of the third rally later in the day in Minnesota the governor and attorney general Keith Ellison tried to prevent his rally. They tried screwing Trump over by limiting just 250 people in his rally inside saying it was for health reasons, but other state officials said it was a political stunt to stop Trump’s rally and campaign, but 25,000 were outside so Trump being the guy he is and loyal to his supporters got in the motorcade and went out to meet them just like he did at Walter Reed. Since they couldn’t get in to see him, he went out to see them.

When it came time to speak, Trump said how terrible and horrible it was for what the governor and attorney general did.

President Trump on Friday told a Minnesota rally that the election was their chance to deal a blow to the “arrogant far left” that allowed unchecked rioting this summer.

“We’re not just running against sleepy Joe Biden. We’re running against the arrogant far left,” Mr. Trump told a small rally crowd at an airport in Rochester. Trump went on to say  “The Democratic governor tried to silence the people of Minnesota and take away your freedom and your rights,” Mr. Trump said. “He would cancel — a word they are very familiar with, canceled, canceled culture — but I said no way I will never abandon the people.”

He said that Biden calls for another lockdown and wouldn’t have a vaccine ready as fast as he got one going. He said Biden and the democrats don’t want you to have a Thanksgiving, they don’t want you to have a Christmas, they don’t want you to have an Easter or fourth of July. “They don’t want you to have anything. The radical left is determined to obliterate the middle class. They think they can take your money, attack your values, indoctrinate your children and silence your voices,” Trump told the crowd that was allowed in as they cheered him loudly. “Your choice is between a fantastic Trump recovery or a Biden depression like you’ve never seen before,” Trump said. Unlike his usual two-hour speeches Trump gave a half-hour speech on stage, then moved out to the crowd that Minnesota Governor Tim Walz and his seething Attorney General kept out of the rally. He has four rallies on Saturday, five on Sunday, and at least three on Monday.