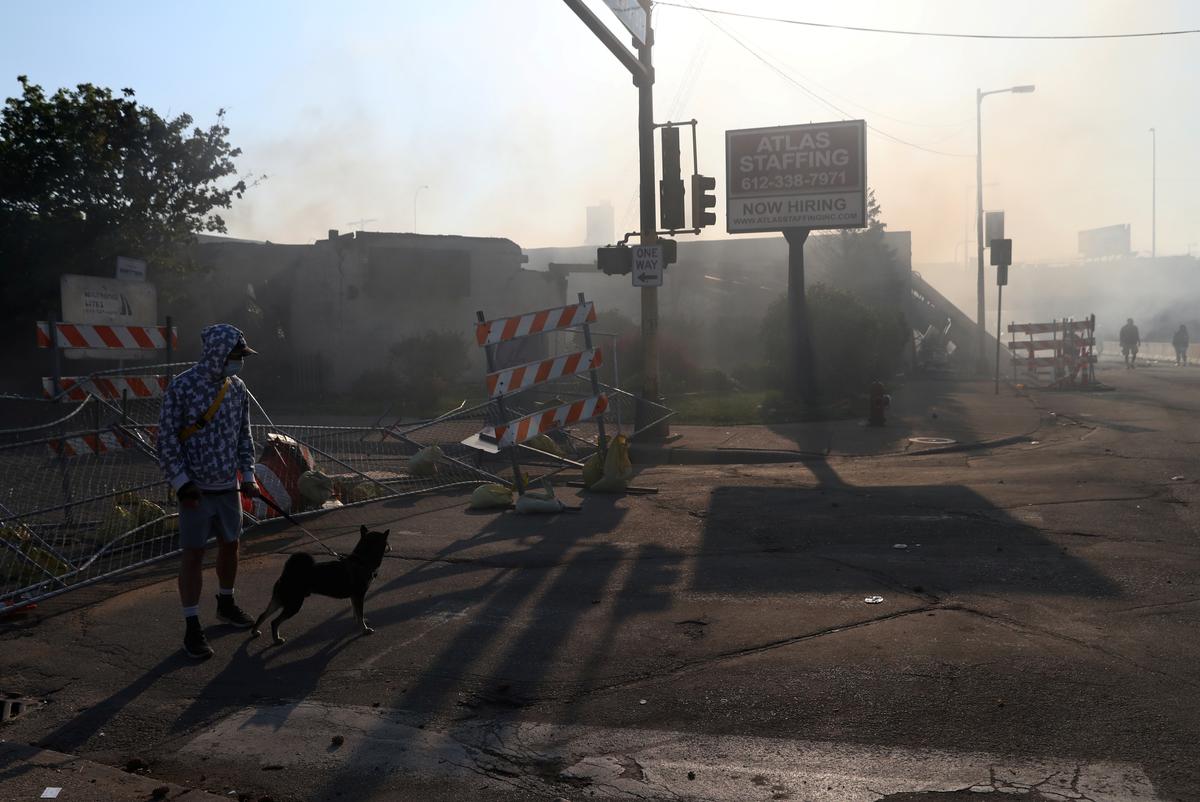 MINNEAPOLIS (Reuters) – The full Minnesota National Guard was activated for the first time since World War Two after four nights of sometimes violent protests that have spread to other U.S. cities following the killing of a black man by a white Minneapolis police officer who knelt on his neck.

Minnesota Governor Tim Walz said the deployment was needed because outsiders were using the demonstrations over the death of George Floyd to spread chaos, and that he expected Saturday night’s protests to be the fiercest so far.

From Minneapolis to New York City, Atlanta and Washington, protesters clashed with police late on Friday in a rising tide of anger over the treatment of minorities by law enforcement.

“We are under assault,” Walz told a briefing. “Order needs to be restored. … We will use our full strength of goodness and righteousness to make sure this ends.”

He said he believed a “tightly controlled” group of outside agitators, some white supremacist groups and drug cartels were to blame for some of the violence in Minneapolis, but he did not give specifics when asked by reporters. He said as many as 80% of those arrested were from out-of-state.

Minnesota National Guard General Jon Jensen said all the state’s guardsmen had been activated, and that 2,500 of them would be mobilized by noon.

“It means we’re all in,” Jensen said.

The demonstrations broke out for a fourth night despite prosecutors announcing on Friday that the policeman filmed kneeling on Floyd’s neck, Derek Chauvin, had been arrested on third-degree murder and manslaughter charges.

Three other officers have been fired and are being investigated in connection with Monday’s incident, which reignited rage that civil rights activists said has long simmered in Minneapolis and cities across the country over persistent racial bias in the U.S. criminal justice system.

‘PAINS ME SO MUCH’

The video of Floyd’s death, filmed by a bystander, showed the 46-year-old repeatedly pleading with the officers and telling them he could not breathe.

In the Minneapolis neighborhood of Lyndale, the mood was somber on Saturday morning as dozens of people surveyed the damage and swept up glass and debris from the night before.

Luke Kallstrom, 27, a financial analyst, stood in the threshold of a post office that had been burned to the ground.

Community members survey damaged businesses after another night of continued demonstrations after African-American man George Floyd was killed May 25 while in police custody in Minneapolis, Minnesota, U.S., May 30, 2020. REUTERS/Leah Millis

“It’s unbelievable,” he said. “It pains me so much. This does not honor the man who was wrongfully taken away from us.”

As he spoke, several military vehicles rolled by, loaded with soldiers.

Some of Friday’s most chaotic scenes were in the New York City borough of Brooklyn, where thousands of demonstrators gathered near the Barclays Center arena. Police armed with batons and pepper spray made more than 200 arrests in sometimes violent clashes. Several officers were injured.

In Washington, police and Secret Service agents deployed in force around the White House before dozens of demonstrators gathered across the street in Lafayette Square.

President Donald Trump said on Saturday that he had watched the whole thing, and, if the demonstrators had breached the fence, “they would have been greeted with the most vicious dogs, and most ominous weapons, I have ever seen.”

“That’s when people would have been really badly hurt, at least,” Trump wrote on Twitter.

He also appeared to call his supporters to rally outside the executive mansion on Saturday evening.

In Atlanta, Bernice King, the youngest daughter of civil rights icon Martin Luther King Jr., urged people to go home on Friday night after more than 1,000 protesters marched to the state capitol and blocked traffic on an interstate highway.

The demonstration turned violent at points. Fires burned near the CNN Center, the network’s headquarters, and windows were smashed at its lobby. At least one police car was among several vehicles burnt.

Rapper Killer Mike, in an impassioned speech flanked by the city’s mayor and police chief, also implored angry residents to stay inside and to mobilize to win at the ballot box.

“Make sure you exercise your political bully power,” he said. “But it is not time to burn down your own home.”

Protesters also took to the streets in other cities including Detroit, Denver, Houston, Oakland and Louisville, Kentucky.

Floyd, a Houston native who had worked security for a nightclub, was arrested for allegedly using counterfeit money at a store to buy cigarettes on Monday evening.

Bail has been set at $500,000 for Chauvin, but it was unclear on Saturday whether he remained in custody. Hennepin County jail records showed no inmate of that name. He faces up to 25 years in prison if convicted.

‘I think people are underestimating how bad this is going to get’: Dr. Ashish Jha on the delta variant
The FBI Is Corrupt and Needs Reform, and Both Parties Know It
Mark Levin: A ‘massive movement’ is about to be unleashed against Biden’s Marxist agenda
Bipartisan lawmakers on China-related commission call for IOC to postpone, relocate 2022 Beijing Olympics
M. Night Shyamalan’s ‘Old’ falls flat, bogged down by clunky dialogue and ‘ham-fisted’ explanations, critics say