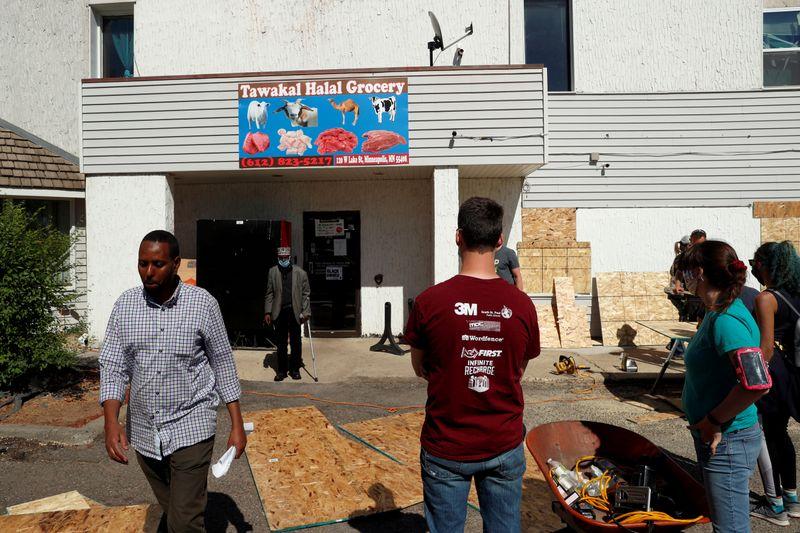 MINNEAPOLIS (Reuters) – At a little past midnight on Saturday as smoke billowed and flames rose from the tops of a nearby bank and a post office building, Minneapolis grocery store owner Mohammad Abdi knew he had a critical business decision to make.

FILE PHOTO: Owner of Tawakal Halal Grocery store walks outside his store following the protests against the death in Minneapolis police custody of George Floyd, in Minneapolis, Minnesota, U.S., May 30, 2020. REUTERS/Lucas Jackson

Either go out into the street and confront the dangerous vandals and looters who were preparing to torch his Tawakal Halal Grocery or standby and watch them destroy his livelihood.

“I told them this is my business, this is my building, please don’t do it,” he said late on Saturday morning, pointing to the alcove in the front of his building where footprints remained from the looters, who were armed with accelerant.

“I didn’t yell, I stayed calm. I told them that I didn’t do anything to them. And they left,” he added.

The 35-year-old Somali man stayed awake through the night and into the morning to watch over the grocery and A & D Food Market, another grocery he owns across the street in Minneapolis’ Lyndale neighborhood, on the city’s southwest side.

Minneapolis has the largest Somali community in the United States. Abdi said his businesses remained intact thanks to a group of two dozen friends and customers who also stood watch all night and shooed off groups off vandals.

It is a testament, he said, to the tightly knit community of residents from his native east African nation.

“I was really happy with my community in the way it helped me out,” he said. “They love me and trust me.”

Peaceful protests have unraveled into nightly riots in this Midwestern city following a bystander video on Monday showing a white Minneapolis police officer pinning his knee into the neck of an unarmed black man who later died.

The death of the man, George Floyd, has sparked outrage and violent protests in other U.S. cities, including New York and Atlanta even after the officer, Derek Chauvin, was fired and on Friday arrested and charged with murder and manslaughter.

Throughout the day on Saturday, teams of community members and business owners somberly swept up broken glass and debris as they surveyed blocks of damaged and destroyed businesses.

Volunteers also prepared for another night of violence by putting up boards on exposed windows on Abdi’s stores and other businesses in the neighborhood.

“I can do nothing, but everything else is something. I have four kids so I have a lot of excuses. But I can’t, this is my city,” said Lynn Fields, who lived in Minneapolis before moving to St. Paul, a city 10 miles (16 km) to the east, as she helped board up Tawakal Halal Grocery late on Saturday afternoon.

In addition to a U.S. Post Office and a Wells Fargo bank branch, several other nearby businesses were destroyed by fire over the last few nights of riots, including a convenience store and a Walgreen’s drug store.

“It’s heartbreaking, just heartbreaking. We are on our own to protect our businesses. We don’t have a choice,” said Robleh Jama, 40, who works at Al-hussein Perfumes, a store next to Tawakal Halal Grocery.

“They came to destroy,” the 40-year-old from Somalia said.

Abdi said that a “black owned” business sign in his front window did not help stop the violent protesters, neither did police officers who focused on clearing the streets of violent protesters rather than protecting local businesses.

“What I saw was really worse than what I saw in Somalia,” said Abdi, who fled his native war-torn country in 2004. “It was really, really sad. Wow! Just wow!”

Fact Check: What Politico, FEMA Chief Got Wrong as Florida’s DeSantis Prepared for Hurricane Ian
McDonald’s owners group says company rejected request to delay big changes to franchise system
Lionsgate leaning toward spinning off its studio business instead of Starz
Jen Psaki Makes a Stunning Admission About Joe Biden
Is Your Child an “It?”