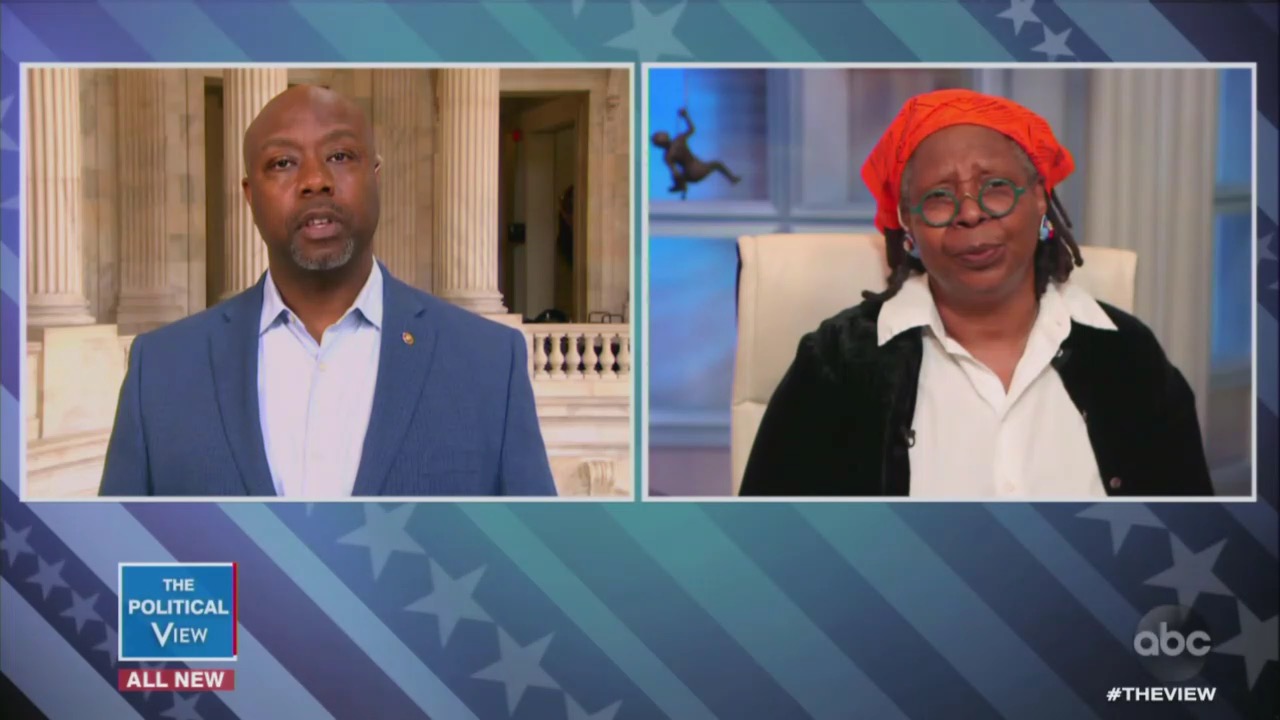 Republican Senator Tim Scott of South Carolina was on ABC’s The View Friday, where he was surprisingly treated very respectfully by the co-hosts, who are usually hostile and nasty towards their Republican guests. Scott was even given the opportunity by Meghan McCain to call out the media’s biased election coverage.

While just the day before the hosts gave Democrat Senator Chuck Schumer a lengthy interview full of softballs, the hosts tried to stay balanced with their questions to Sen. Scott, focusing mostly on coronavirus testing and how Congress is helping the black community affected disproportionately by the virus.

The most left-leaning questions came from co-host Sunny Hostin and Whoopi Goldberg (Joy Behar was absent). Hostin asked if it was “fair” to “force” Americans who were scared of the virus to go back to work. Only Whoopi pressed Scott to bash President Trump for thousands of people dying from coronavirus:

You know, when we’re talking about something like COVID, you know, he keeps blaming China and then Obama, and then, you know, the models show that perhaps if we had done an earlier lockdown, 36,000 fewer people would have died. I guess the question is, does that fall on his shoulders?

But Scott, who has been a critic of the president at times, didn’t take the bait. After touting Trump’s travel bans from China in January, he explained how this wasn’t the time to be pointing fingers at each other and we needed to stand strong as a “united front” to help each other get through this time period:

To your first question, I do think that the strategy at the beginning of stopping flights from coming into America, that containment strategy is really important. I don’t think we get any benefit of blaming the former president or the current president. This is like halftime in America. I don’t play Monday morning quarterback at halftime. I want to get this thing under wraps, and then we can assess what should have been, could have been or would have been done, but right now it is team America working as one united front to help the most vulnerable in this nation. The more we do that, I think the better off we will all be.

Scott’s uplifting message of unity was a stark contrast against Schumer’s constant partisan bashing on the show just the day before. Still, Whoopi instructed Scott to repeat what he said to President Trump: “I want you to give him a call and tell him that,” she said smiling. However, shouldn’t Whoopi be taking her own advice?

Co-host Meghan McCain also gave Scott an opportunity to address the media’s biased 2020 coverage. She brought up a recent Republican win in California that was ignored by the networks and asked the senator if he saw the media making the same mistakes this election season that they did in 2016:

Senator, to all of those assuming President Trump is doomed in 2020, just last week Democrats lost a seat in California for the first time in 22 years, and they lost to a Republican who embraced Trump in a district that Clinton carried handily in 2016. What is it about the president that you and many around the country see and that the media seems to continue to be missing?

Scott called out the media for ignoring large sections of this country in favor of Democrat, coastal voters. He also pointed out how the president has much more enthusiastic support from the right then Biden does on the left, and how these factors may make the race “very different” than the media thinks it will be:

I think the answer to the question is that most often the media is not talking to anyone in rural America, and they’re certainly not talking to someone in South Carolina that’s a Republican or most independents. Frankly his support is without any question at least where it was before in those states. I think in Wisconsin, Michigan and Pennsylvania it’s a bit of a roller coaster, but the enthusiasm numbers are significantly higher for President Trump over Vice President Biden. 53% high enthusiasm, and about 24% high enthusiasm for Biden. When you take those numbers and you expect a pretty strong recovery as we head into the Summer and into the Fall, you will expect that race will be very different than most of the prognosticators think today, but I said that in 2016 when The New York Times called me and asked me to explain the day before the election, why Trump lost. I said, I think you haven’t been to South Carolina, and you certainly haven’t been to Moncks Corner, South Carolina. It was pretty clear to me that most people were in a different position.

GOP Rep. John Katko, one of the House Republicans who voted to impeach Trump last year, announces that he will not seek another term in Congress
Rabbi taken hostage at Texas synagogue by British man escaped by throwing a chair at his captor
Fauci’s Financial Disclosures Released: “Career Civil Servant” And Wife Worth $10.4 Million
John Thune Says Trump ‘Rehashing’ 2020 Election Not Helpful for Midterms
Labor Department vows to protect workers from Covid after Supreme Court blocks business vaccine mandate