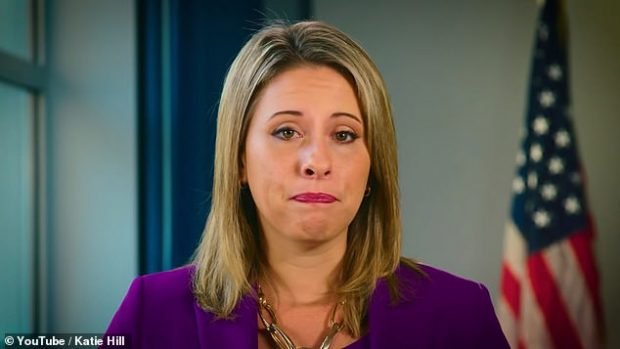 Hill, who resigned in October amid allegations that she had improper relationships with her staffers, tweeted Sunday after Republican former Navy pilot Mike Garcia flipped Hill’s old seat red in the May 12 special election.

Garcia had no political experience but beat out Democratic California assemblywoman Christy Smith, who had Democratic Party support and an endorsement from former President Barack Obama.

“So yeah it really hurt to have my old seat flip back to Republican-for a ton of people & also for me,” Hill tweeted Sunday. “In fact, it was pretty fucking devastating. I went offline & cried for a few days but, as always, getting ready to stand back up & keep fighting. Hope you are too.”

“Onward,” the former congresswoman added with a heart emoji.

The former congresswoman blamed her resignation on an ex who “gave nonconsenual(sic) nude pics of me to the ppl who wanted this seat- people who were backing Garcia when he was my opponent.”

“They gave those pics to the press,” she added. “I resigned. I take full responsibility for my mistakes, but this Republican win is no coincidence.”

“To @christyforca25, @housedemocrats, #CA25, my former staff & everyone who worked so hard to flip this seat, I’m so sorry,” Hill said. “I know I let you down, and I reflect on my role in it all everyday. Know that I’m here, ready to work. Let’s take this seat back in Nov – #CA25 deserves it.”

Hill did not immediately respond to a request for comment.