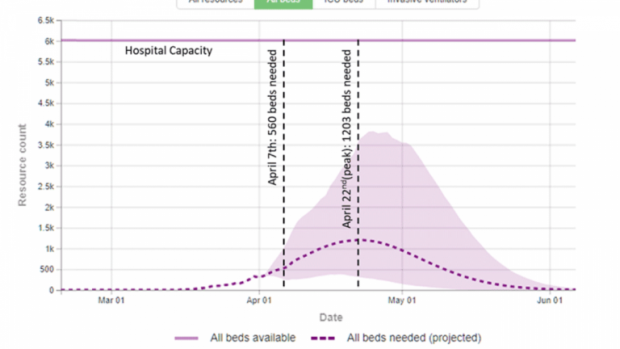 Dozens of scientists, economists, and medical experts are urging President Donald Trump to add a professional statistician to his coronavirus task team because they worry the models his administration is relying upon could potentially lead his administration astray.

A slate of academics provided the Trump administration with a letter Tuesday listing several ideas the president could use to help boost his team’s pandemic response. They believe adding an expert statistician to the COVID-19 task team could help Trump avoid relying on poor models that don’t reflect the real world.

“Having an expert statistician as a key part of the President’s team is an urgent matter,” they wrote in a letter obtained by the Daily Caller News Foundation. “Such an immediate addition will reduce the chances of being misled by speculative computer models and other data.”

The letter’s signees cite two articles to help explain why they think models get it wrong without a statistician’s help.

They cite an April 23 Daily Signal article from retired epidemiologist James Enstrom who says in the piece that “all other COVID-19 models are grounded in important assumptions about which there is currently little knowledge.” Enstrom, one of the letter’s signees, also suggests that “some deaths are being classified as COVID-19 deaths even when COVID-19 is not the underlying cause.”

Enstrom also mentions the Institute for Health Metrics and Evaluation (IHME), which projected on April 1 that 262,029 hospital beds would be needed on the peak date of the coronavirus’s spread in the United States. The researchers behind the IHME model eventually dropped that projected number down by 58 percent to 140,823 on April 6.

The letter was sent to Trump administration officials Tuesday, John Droz, a physicist who authored the memo, told the DCNF. “We support the President and wanted to give him several constructive suggestions going forward — and these are evidently somewhat different from what he is hearing from the Coronavirus Team,” Droz said.

Statistician Stanley Young, climatologist Patrick Michael, and immunologist Jonathan Bernstein are among the 70 scientists and academics who signed the letter asking the administration to strengthen the task force. Michaels worked as a senior fellow in environmental studies at the Cato Institute until 2019, and Bernstein is a clinical immunologist at Bernstein Allergy Group in Ohio.

Young, for his part, is a member of the Environmental Protection Agency’s Science Advisory Board and recently made waves after he criticized an April 4 Harvard University study drawing an association between particulate matters and coronavirus deaths. “The paper is written in a way that strongly implies cause and effect,” he told the Washington Examiner in April, referring to the research.

Young and the other academic’s also provided other potential pieces of advice for the administration, including emphasizing the importance of flattening the curve, a policy designed to slow the spread of coronavirus such that it flattens out the number of cases over time.

In addition, they want the Trump administration to refrain from imposing “one-size-fits-all mandates” and instead allow states to stagger when they reopen.

The pandemic has killed more than 85,000 people in the United States thus far.

“The main benefit is that it will enable higher efficacy COVID-19 therapies to come online (which will happen considerably sooner than vaccines will),” the letter explains, noting that flattening the curve is not a permanent solution. “The public needs to be much better advised as to this rationale for short-term flattening.”

“It would be informative if deaths related to lock-downs, higher prices, reduced incomes were kept track of,” they write, adding that it is not helpful when medical professionals sometimes lump deaths from other consequences into the coronavirus category. Misstating such deaths can make for bad policy, they argue.

Neither the Centers for Disease Control and Prevention nor the White House’s COVID team has responded to the DCNF’s request for comment regarding the letter.

The data appear to illustrate how the pandemic is causing an increase in deaths, perhaps as a result of people forgoing hospital visits for what would otherwise be treatable conditions. The New York Times initially reported on the data on April 28, suggesting that the CDC’s findings show that coronavirus death tolls are likely higher than official counts.

‘Epitome Of Hypocrisy’: Archbishop Rebukes Pelosi For Calling Herself A ‘Devout Catholic’ In Defense Of Abortion
Hypocrite Colbert Imagines Facebook ‘Hunting Down’ ‘Misinformation’ With Bow and Arrow
Whitlock: Blame LeBron James for the fact no one cares that our Olympic basketball team stinks
Cramer’s week ahead: The most important week of earnings season
Public Enemy No. 1: The Couple Who Started a Wildfire through a Gender Reveal