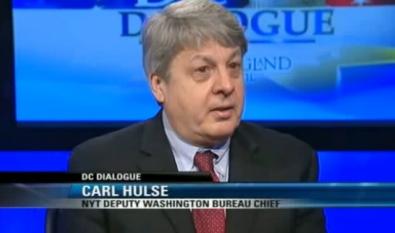 Saturday’s New York Times cheered on the no-limits left-wing spending wishlist of congressional Democrats in “G.O.P.’s Slow Approach To Aid Risks Blowback” by congressional reporter Carl Hulse. It is Hulse’s favorite type of story, one he has written and rewritten constantly over the years: Democrats in Congress pressuring Republicans to cave in on one thing or another — immigration, spending, taxes, etc.

More than eight weeks and almost $2.8 trillion federal dollars into an urgent response to the coronavirus pandemic, congressional Republicans and the Trump administration have made it clear that they are in no rush to engage with Democrats on another round of costly relief measures.

But their resistance — born of spending fatigue and policy divisions — is proving increasingly unsustainable, given tens of millions of anxious Americans out of work, businesses and schools shuttered and an election looming.

Even as the House moved forward on Friday with a Democratic recovery measure that Republicans abhor, President Trump and party leaders offered new assurances that they would draft their own legislation at some point, reflecting their growing unease at being portrayed as hostile to providing additional federal help.

Republicans’ reluctance to commit to more relief measures has provided an opening for Democrats, who have been pounding Senate Republicans — particularly endangered incumbents facing the voters in November — for their stance.

Hulse actually made a concession to fiscal reality before pivoting back to pushing the partisan Democratic line.

Members of both parties concede that the $3 trillion measure that Democrats were speeding through the House is several bridges too far, considering its giant cost and the underpinning of progressive policies on immigration and other issues that could never clear the Republican-controlled Senate. Republicans branded it an outlandish liberal wish list. Most have rejected it outright, and very few were expected to back it in the vote set for Friday — conveniently scheduled by Democrats to coincide with more gloomy unemployment news.

But this week demonstrated the difficulty of maintaining that stance. Jobless claims soared to 36.5 million over two month….

Earlier Thursday, Mr. McConnell shredded the House legislation on the Senate floor as an “1,800-page seasonal catalog of left-wing oddities” and a “totally unserious effort.” He also said that Democrats “cannot stop salivating over the possibilities for partisan gain.”

Whether they are salivating or not, it is true that Democrats see the opportunity to score political points if Republicans stick to their standpat stance on pandemic relief….

Republicans say they believe they can counter the Democratic drumbeat by focusing on how over-the-top the House proposal is, with its plethora of liberal policies — and by emphasizing that the party’s most progressive wing still was not satisfied.

In the meantime, the parties remain in their corners shouting, but Democrats believe the clamor will ultimately force Republicans to come to the table.

They will if Hulse has anything to say about it, anyway.

Tyre Nichols’ mother says she’s ‘not going to stop’ until those responsible for son’s death face justice
Is This CNN’s Response to Gutfeld’s Ratings Dominance?
Air Force General Predicts U.S. Will Be At War With China In 2025: ‘I Hope I Am Wrong’
Lisa Loring, the original Wednesday Addams actress, dies after stroke
‘New clock’ on police accountability after death of Tyre Nichols, says civil rights campaigner