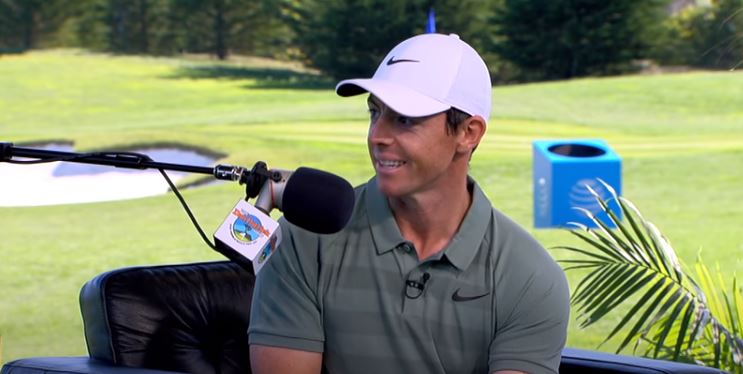 Once they were golfing buds, but now Rory McIlroy refuses to play with President Donald Trump. McIlroy doesn’t agree with anything the President says, some of which is “just terrible.” Mark Cannizzaro’s New York Post headline on the story asserted that the world’s top-ranked golfer had taken a swing at his old golfing pal.

Appearing on Thursday’s McKellar Podcast, a weekly podcast of McKellar Magazine, with host Lawrence Donegan and John Huggan, McIlroy was asked about a 2017 round of golf with the president and vowed they’ll never play together again.

Cannizzaro wrote: “Three years ago, Rory McIlroy (appearing in file photo) played a round of golf with Donald Trump and, almost as soon as he walked off the 18th hole, he was slaughtered by many of his fans on social media.” Those fans lashed out at him, calling him a “fascist’’ and a “bigot.’’

Asked on the podcast about that past golf outing and the resulting fall-out, McIlroy said, “guilt by association’’ and, “I haven’t done it since, so there’s one answer to [your] question.’’

Since then, President Trump extended another invitation to McIlroy, who turned down the offer. Asked why, McIlroy said it was “cut of choice.” He explained that the one outing they had together was enjoyable and followed up his comments with a “but”:

“I’ll sit here and say the day that I did spend with him and others was very enjoyable. He’s very charismatic, he was nice to everyone — it didn’t matter whether you were me or guys in the cart barn or the pro at the golf club.

“He has something. He obviously has something or he wouldn’t be in the White House, right? He has something. … Whatever it is, it’s an X factor or it’s charisma, I don’t know. Whatever you call it but most people that he came across that day, he was cordial, he was nice, he was personable and that’s my only real interaction with him.”

“But,’’ McIlroy said, switching gears, “that doesn’t mean that I agree with everything — or in fact anything — that he says.’’

Of the COVID-19 virus, McIlroy said:

We’re in the midst of something that’s pretty serious right now and the fact that he’s trying to politicize it and make it a campaign rally and say we’re administering the most tests in the world like it is a contest — there’s something that just is terrible. It’s not the way a leader should act. There’s a sort of diplomacy that you need to have, and I don’t think he’s showing that — especially in these times.’

The podcast hosts wanted to know if the world’s top golfer will play with Trump again, and he replied: “I don’t know if he’d want to play with me again after what I just said. I know it’s very self-serving of me to say ‘No’ and if I don’t, then it means then I’m not putting myself in position to be put under scrutiny and that I’m avoiding that. But I probably wouldn’t, no.”

When he played with Trump in 2017, McIlroy insisted his decision “wasn’t an endorsement nor a political statement of any kind.” Golf was common ground, but that’s all it was. “Whether you respect the person who holds that position or not, you respect the office that he holds.”

Though he took a strong stance against Trump, McIlroy also insisted he stays in his lane.