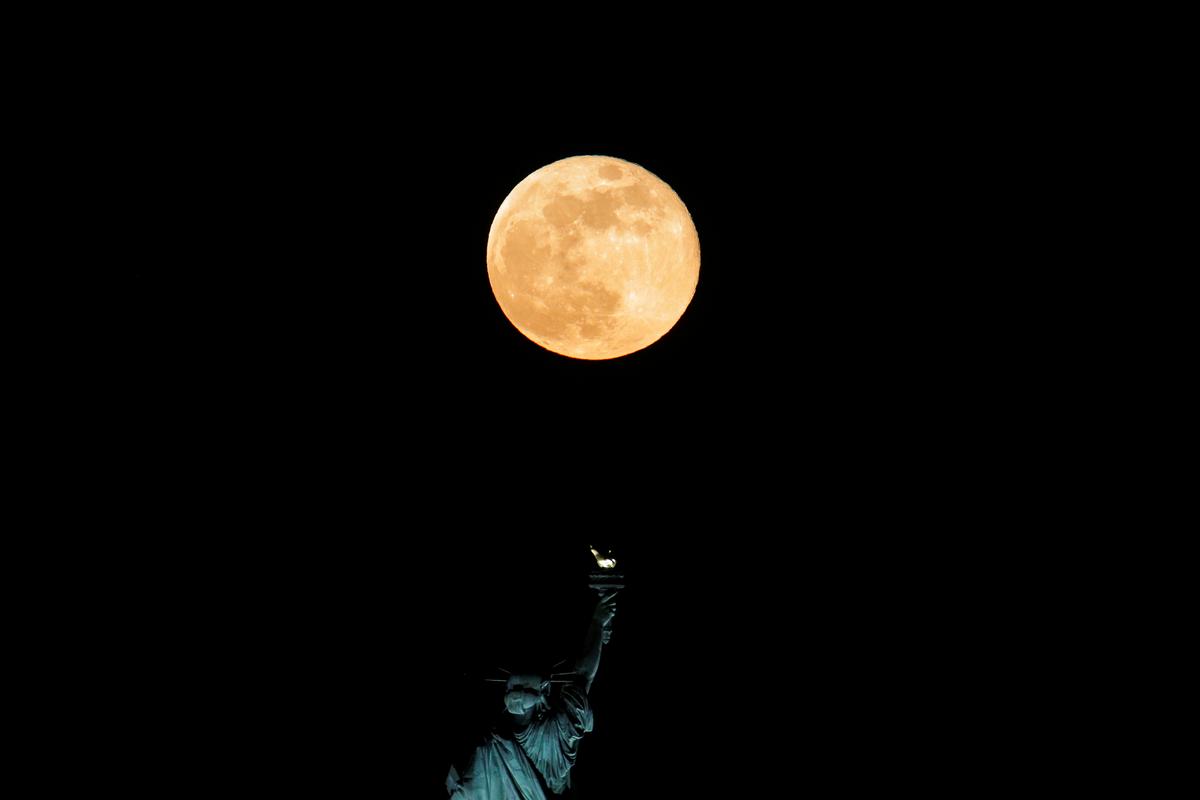 WASHINGTON (Reuters) – NASA on Friday set the stage for a global debate over the basic principles governing how humans will live and work on the moon, as it released the main tenets of an international pact for moon exploration called the Artemis Accords.

FILE PHOTO: The full moon, also known as the Supermoon or Flower Moon, rises above the Statue of Liberty, as seen from Jersey City, New Jersey, U.S., May 7, 2020. REUTERS/Brendan McDermid/File Photo

The accords seek to establish ‘safety zones’ that would surround future moon bases to prevent what the U.S. National Aeronautics and Space Administration called “harmful interference” from rival countries or companies operating in close proximity.

They would also permit companies to own the lunar resources they mine, a crucial element in allowing NASA contractors to convert the moon’s water ice for rocket fuel or mine lunar minerals to construct landing pads.

The accords are a key part of NASA’s effort to court allies around its plan to build a long-term presence on the lunar surface under its Artemis moon program.

“What we’re doing is we are implementing the Outer Space Treaty with the Artemis Accords,” NASA administrator Jim Bridenstine told Reuters, referring to a 1967 international pact that emphasizes that space should be used for peaceful rather than military uses.

The framework will be used as an incentive for nations to adhere to U.S. norms of behavior in space, he added.

“It applies to low Earth orbit, it applies to the moon as well,” Bridenstine said. The accords also require countries to adopt standards of the United Nations Space Debris Mitigation Guidelines — which govern the prevention of hazardous space debris — and the Registration Convention, which would require countries to provide orbital details of their “space objects.”

The U.S. Congress passed a law in 2015 allowing companies to own the resources they mine in outer space, but no such laws exist in the international community. The Artemis Accords, consistent with the Trump administration’s space policy, appear to clear the way for companies to mine the moon under international law and urge countries to enact similar national laws that would bind their private sector’s space operations.

“Why would private companies take the risk of going to mine resources if the legal situation was they could be kept from owning them?” Lori Garver, former deputy administrator of NASA, said to Reuters. “So anything this does to clear any of that up could really help advance progress in space development.”

Reuters reported earlier this month that the administration of U.S. President Donald Trump was drawing up the Artemis Accords.

“The principle of invasion is the same, whether it be the Moon or Iraq. The creation of a ‘coalition of the willing’ is initiated,” Rogozin wrote on Twitter. “Only Iraq or Afghanistan will come out of this.”

China said it was willing to cooperate with all parties on lunar exploration “to make a greater contribution in building a community with shared future for mankind,” a spokesperson for China’s foreign ministry said in a statement faxed to Reuters.

The safety zones — while intended to encourage coordination — have prompted questions on whether the accords align with the Outer Space Treaty, which states the moon and other celestial bodies are “not subject to national appropriation by claim of sovereignty, by means of use or occupation, or by any other means.”

The size of the safety zones would vary depending on the nature of the site they surround and would not constitute appropriation, Bridenstine said.

However, there is a question over who determines the sizes of the safety zones, said Ram Jakhu, associate professor at McGill University’s Institute of Air and Space Law in Canada. “Safety zones are necessary, but they can also be abused in a way that it may become appropriation.”

“The principles that are being put forward here is nothing that we believe any responsible spacefaring nation would disagree with,” he said.

“Via the Artemis Accords, we hope that the future will look a lot more like “Star Trek,” and a lot less like “Star Wars” by getting ahead of these issues,” Gold said.