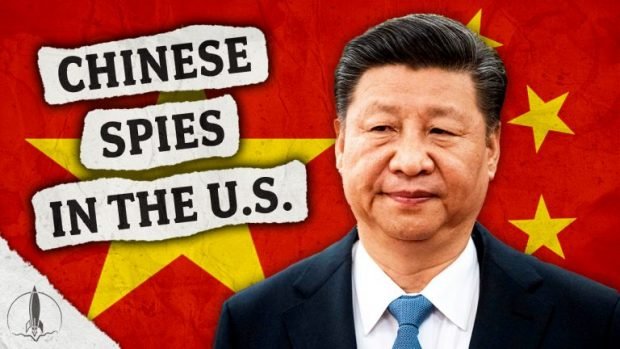 It is estimated there are thousands of professors in our top US universities that are working with China right now.  There are about 1/3 – 1/2 million Chinese students studying here from China according to former ambassador to China John Huntsman.

I don’t believe these are just students – a portion of them are spies.  It’s China’s MO.  That was the case with the Harvard professor and the two female spies that masqueraded as his students.  I know China is targeting our universities to infiltrate us.  It is relatively easy to get to us through our Liberal universities.

I hope the powers that be in our govt. starts taking a closer look at our liberal professors in the technology fields in particular, some are Americans and some Chinese.  I bet they find a treasure trove of infiltration by China.  Just makes sense, because China’s MO is utmost secrecy.

The Department of Justice announced that the Chair of Harvard University’s Chemistry and Chemical Biology Department and two Chinese nationals have been charged in connection with aiding the People’s Republic of China.

Zaosong Zheng, 30, a Chinese national, was arrested on Dec. 10, 2019, at Boston’s Logan International Airport and charged by criminal complaint with attempting to smuggle 21 vials of biological research to China. On Jan. 21, 2020, Zheng was indicted on one count of smuggling goods from the United States and one count of making false, fictitious or fraudulent statements. He has been detained since Dec. 30, 2019.

Federal Agents arrested Dr. Charles Lieber, chair of Harvard University’s Department of Chemistry and Chemical Biology, with lying to the Department of Defense about secret monthly payments of $50,000.00 paid by China and receipt of millions more to help set up a chemical/biological “Research” laboratory in China. Also arrested were two Chinese “Students” working as research assistants, one of whom was actually a lieutenant in the Chinese Army, the other captured at Logan Airport as he tried to catch a flight to China – smuggling 21 vials of “Sensitive Biological Samples” according to the FBI.

The research lab the good professor had helped set up is located at the Wuhan University of Technology. Wuhan China is ground zero to the potentially global pandemic known as the “Coronavirus” which is both spreading rapidly and killing people.

Charles Lieber, chair of the Department of Chemistry and Chemical Biology at Harvard, was arrested in January on accusations that he made a materially false, fictitious and fraudulent statement about work he did for a program run by the Chinese government that seeks to lure American talent to China.

Lieber was paid $50,000 a month and up to $158,000 in living expenses for his work, which involved cultivating young teachers and students, according to court documents. He also received more than $1.5 million to create a research lab at the Wuhan University of Technology in China.

Here is a couple of events that took place that were caught, Who is to say what got past us.

As mentioned above Zaosong Zheng, a graduate student at Beth Israel Deaconess Medical Center in Boston, was arrested December 10 as he was attempting to fly from Boston to Beijing with 21 vials stolen biological specimens.

Jan 2020 WASHINGTON: Earlier this month, Yuhao Wang and Jielun Zhang, Chinese students at the University of Michigan, drove past a gate guard at Naval Air Station Key West after ignoring instructions to turn around, leading military police on a 30-minute chase that ended in their capture where investigators found pictures of military buildings and ships on a camera and cell phone.

Yanqing Ye, 29, a Chinese national, was charged in an indictment with one count each of visa fraud, making false statements, acting as an agent of a foreign government and conspiracy. Ye is currently in China.

Lieber told investigators and Harvard University officials in 2018 that he “is not and has never been a participant” in the program and he “had no formal association” with Wuhan University after 2012, according to court documents. He claimed the university “continued to falsely exaggerate” his involvement.

These charges, and others like them across the country, illustrate the serious and persistent threat of China’s efforts to steal intellectual property and research from our nation’s universities,” John Demers, assistant attorney general for national security and head of the Justice Department’s China Initiative, said in a statement.

Huntsman praised a letter sent Monday by 18 attorneys general demanding a congressional investigation into China’s coverup of the coronavirus outbreak in its early stages, saying on Fox News that such an investigation is necessary.

Well, I’ll tell you why this letter is such an important one, by these attorneys general. The Chinese have invested a lot in their relationship-building in our nation’s capital. But they’ve also spent a lot of time and resources — listen to me, we have 350,000 Chinese students at our universities across this great country — they have also invested in state-by-state relationships, thinking they can use one against the other,” Huntsman said.

“What is the one thing that the Chinese Communist Party fears more than anything? They like control, they like domestic stability, they control the airwaves for the most part. They hate transparency. The more voices coordinated in this country, even at the state level, that speak out about what happened, and the lying, the cheating, the disinformation, and let’s be very clear about this.

“Early November we saw the first cases of coronavirus in China. It wasn’t until late January that they actually reported the facts to the [World Health Organization. In the meantime, you probably have 5 million people who left the Hubei province, which is where the epicenter was located, and they went throughout China, they went throughout the world. That was probably the most significant mistake that China has made in recent years, and it’s the reason that we are where we are,” Huntsman said.

*So far China has covered up the outbreak since Nov. 2019.

*Lied about numbers to date.

*Rejected International and US assistance.

*Threatened not to export medical supplies.

If there is one hallmark of Chinese behavior, it’s secrecy, especially about their finances.  Just like a good thief, they hate transparency!  One big reason for their secrecy, is that the wealth was stolen.  They have the most sophisticated and creative ways of stealing, where a lot of the time you are not even aware they stole from you.

Nearly every critical U.S. industry today is buffered with either Chinese investments directly or driven by the lust for reaching the massive Chinese market – or both. Principles such as free speech and respect for basic human rights that are supposed to be at the core of Western civilization, are routinely ignored in fawning efforts to appease Chinese benefactors.

Nowhere is this more evident than in the current COVID-19 pandemic. That the COVID-19 virus originated in China is a matter of fact and science.  Just as clear are the deliberate actions of the CCP that contributed to its global spread. Yet, despite the disproportionate impact of the virus on at-risk communities as well as among minority groups in the U.S., barely a peep of criticism has come from leftist institutions.

Not only have these China-centric institutions remained noticeably silent in leveling even mild criticism at China for its central role in the global pandemic, but they have actually hampered efforts to combat the virus, by burying the truth of China’s role in the virus’ spread. Those who openly discuss facts about China’s responsibility for the pandemic’s origin and spread, are loudly accused of “racism” and “xenophobia.” Ben Rhodes, an Obama apologist, criticized Secretary of State Mike Pompeo this week saying it incited “bigotry against Asians” to criticize China’s substandard track record with labs and resulting global outbreaks of viruses.

We are at the mercy of China making everything for us.  Just that alone allowed them to steal our ideas, designs, and know-how.  They duplicated a lot of it, using inferior products and techniques, and sold it elsewhere for cheaper.   Metal parts – connectors – were hollowed out.  Components were switched from metal to cheap plastic.  We haven’t touched on the stealing of technology, music & entertainment, and intellectual property. In short, the Chinese got wealthier through stealing from us, plain and simple.

There is a video showing activities in their clubs where to become a member, you have to own and drive Ferraris, Lamborghinis, Mercedes-Benz 300SL Gullwing (1961) going at $2 million, IF you can even find one) ..  these are seen being driven by 18 and 20 years olds all over Beijing and Shanghai.

China is portrayed in the mainstream media as being poor, but logical, overwhelming evidence suggests otherwise.  They are richer than we could ever imagine.  Certainly far richer than us.  Our country is busy dishing it out to all the aliens and wasting obscene amounts on no one knows exactly what, and I can go on endlessly.

Could we afford to build entire cities like the Chinese (I heard 32) with modern skyscrapers, long before people have purchased them?  Can we afford to buy up numerous strategic seaports and real estate holdings all over the world?  Create new islands by dredging it out from the sea?  Have the most modern infrastructure of any major country?  We look 3rd World compared to them!

Fox recently showed China holding a military parade.  Shocked reporters with their advanced technology.  They have weapons that could wipe out many major cities on our East Coast all at once, that we did not know they had.  As General Keane said, we are no match for China’s highly technologically advanced, and far bigger military.  They use a good part of their wealth towards technology (that they steal from us or get from traitors like Clinton) and military (that we are unwittingly funding).

These people are beyond rich, and we helped them get there without even knowing it.  They hide their wealth every chance they get.  Now that COVID wiped us out in a big way, it’s going to take a very long time to recover, let alone catching up to China.  I think China is more than ready to go to war.

A good friend of mine from Las Vegas said the Chinese are known to be by far the highest rollers, called whales.  Their wives are the biggest purchasers in our retail stores, needing large suitcases and men to carry their purchases back to their luxury penthouse suites at their hotel.  This is the Chinese normal in Vegas, where they also purchased, with suitcases of cash, vast amounts of our real estate.  Always non-traceable cash.

They are not that innocent whatsoever.  And to think Americans trust them with all their essential medical supplies, processed food, and just about everything that can be manufactured, while our graduates have to hustle to find a job and live in parents’ basements. It’s truly beyond comprehension.

Trump put it all together and started lowering our taxes, putting the minorities to work and off of welfare and food stamps, blocking illegals with Wall, and bringing manufacturing back.  That’s more than any president before him.  And with no help from Dems.

The best part is that he’s onto China.  The Chinese-made fireworks in America will soon go off.  We are just beginning to realize the monstrous threat to our existence from” poor little China.”  We have already consumed the crippling, deadly, appetizer from their COVID 19.  Today, they’ve shown us how their advanced military dwarfs ours.  What’s in store for Tomorrow?