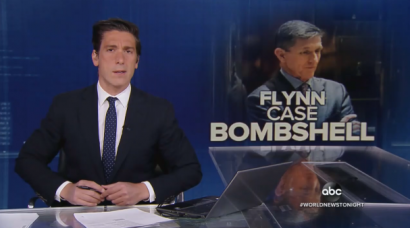 In 2017, liberal journalists and hosts flipped out over the prospect of Michael Flynn bringing down the Trump administration. MSNBC host Rachel Maddow called “the news….that the White House counsel was notified weeks in advance that a national security adviser candidate [Michael Flynn] was under federal investigation and the White House then went ahead and made the hire….a bigger scandal than almost anything we’ve ever seen in any presidential administration.”

But in 2020 the case against Flynn began to collapse, as it became clearer that there was an attempt to entrap Flynn. These new developments unfurled from January through May, but the Big Three (ABC, CBS, NBC) evening news programs refused to report them. So anyone who relied on them for their news was probably shocked when on May 7 the case was suddenly dropped.

The following are just a few of the major developments in the Flynn case and how they were ignored by the ABC, CBS, NBC evening news programs:

“Flynn moved to withdraw his guilty plea for lying to the FBI, citing ‘bad faith, vindictiveness, and a breach of the plea agreement’ by the government.’ The prosecution has shown abject bad faith in pure retaliation against Mr. Flynn since he retained new counsel,’ [Flynn attorney Sydney] Powell wrote in the filing. ‘This can only be because with new, unconflicted counsel, Mr. Flynn refused to lie for the prosecution.’

“President Trump said he was ‘strongly considering’ a pardon for Flynn after reports that the Justice Department misplaced the records from Flynn’s January 2017 initial interview with federal prosecutors. So now it is reported that, after destroying his life & the life of his wonderful family (and many others also), the FBI, working in conjunction with the Justice Department, has ‘lost’ the records of General Michael Flynn,’ Trump tweeted. ‘How convenient. I am strongly considering a Full Pardon!’”

The memo appears to weigh the pros and cons of pursuing those different paths. ‘I don’t see how getting someone to admit their wrongdoing is going easy on him,’ one note reads. Flynn did not ultimately admit to wrongdoing in the interview.

The document indicates that the agents at least discussed the merits of a by-the-book approach: ‘If we’re seen as playing games, WH [White House] will be furious.’ Flynn’s attorney, Sidney Powell, told Fox News after the document release that ‘this persecution will have to be thrown out entirely.’”

The Justice Department dropped its case against Flynn. “‘The Government has determined, pursuant to the Principles of Federal Prosecution and based on an extensive review and careful consideration of the circumstances, that continued prosecution of this case would not serve the interests of justice,’ the filing said.”

On the May 7, not one of the evening news programs showed viewers the exculpatory evidence presented in recently released notes from FBI investigators, who made it clear they were going out of their way to target the General.

On May 9, CBS and ABC reported on the DOJ decision but only to advance former President Barack Obama’s spin, as seen in this portion of a May 9 ABC World News Tonight report:

CORRESPONDENT ANDREW DYMBURT: During a call with thousands of former staffers and officials that was leaked, Obama also taking aim at the Justice Department’s unusual move to drop the criminal case against fired national security adviser Michael Flynn, who pleaded guilty to lying to the FBI.

BARACK OBAMA: There is no precedent that anybody can find for someone who’s been charged with perjury just getting off scot-free. You begin to get worried that our basic understanding of rule of law is at risk.

DYMBURT: President Obama had forced Flynn’s removal from his own administration and warned president trump about bringing him on.

ABC NEWS POLITICAL DIRECTOR RICK KLEIN: He’s often warned when you start to see an undermining of a rule of law, so this hits close to home for president Obama. This kind of action, this kind of speaking out is just a taste of what’s to come.

NewsBusters Podcast: Media Stand Proudly with Antisemite Ilhan Omar
MSNBC On 1619 Project Critics: ‘The Criticism Is Not Legitimate’
The War Against Battle Re-Enactments Is a Blow to History and Tradition
Trial Balloons in the Sky and into 2024
Chinese spy balloon flying over US airspace, says Pentagon