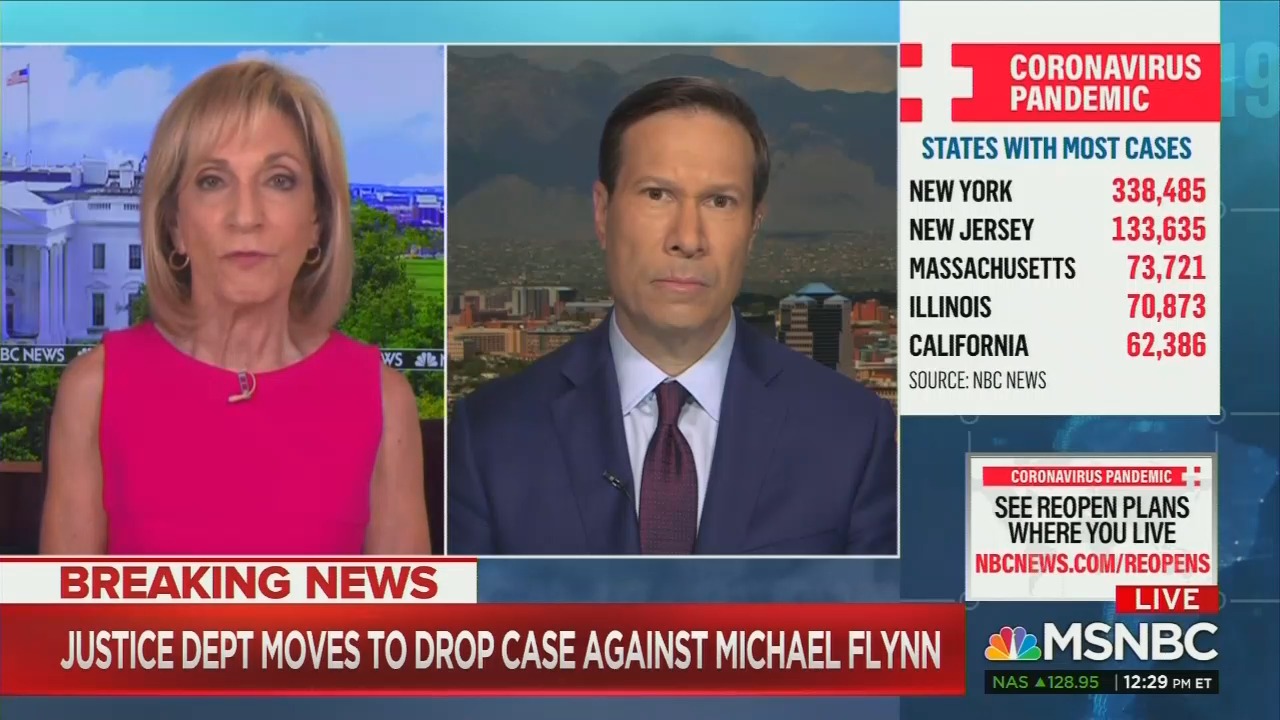 After weeks of Andrea Mitchell Reports repeating Chinese Communist Party talking points, Andrea Mitchell and former FBI Assistant Director for Counterintelligence and current MSNBC contributor Frank Figliuzzi declared on Friday without any evidence that Russian President Vladimir Putin had something to do with the Justice Department’s decision to drop the case against former national security adviser Michael Flynn.

After Mitchell breathlessly summarized the “stunning” and “unprecedented” decision on Flynn, Mitchell saw something sinister in the Thursday phone call between President Trump and Putin. “Frank, first, all of the implications here, and the fact that he then called Vladimir Putin yesterday, and according to the White House announcement of this and description of it, there was no mention of the Russia probe and the election probe. But the president himself discussed that with Vladimir Putin, and the facts that in his view now that the Russian hoax was disspelled, they could get back to business.”

She then asked Figliuzzi to, “Talk to me about your counterintelligence concerns here.”

Figliuzzi was certain that the phone call and the decision to drop the case were connected, “Yeah, I think they’re actually linked. The dismissal of charges against Flynn and conversation by the president with Vladimir Putin, stone cold adversary of the United States on the very same day, that’s not a coincidence.“

Whether Trump is allegedly a puppet or merely trying to appease Putin was left unsaid, but Figliuzzi maintained that the Flynn investigation was an urgent matter of national security, “The Flynn interview that is at issue here by the FBI was all about resolving the question of whether Mike Flynn was a counterintelligence threat to the nation as he entered into the national security adviser role. It was about figuring out how to neutralize, resolve and counter that threat. So when the president gets on the phone with Vladimir Putin and the topic comes up in the same conversation, the concerns have not yet been resolved.”

A retired three-star general is a national security threat? That’s a bit of a stretch.

Mitchell and Figliuzzi are simply wrong. The Trump-Putin phone call was on Thursday, the same day that the DOJ made the decision public, but the recommendation to drop the plan was made last week by U.S. Attorney Jeff Jensen.

Ron DeSantis Is More Popular Than Any Other National Political Figure
WA Democrats to Release Hundreds of “Worst of the Worst” Sex Offenders into Residential Communities
American Airlines beats fourth-quarter profit expectations as higher fares buoy revenue
Diversity Day: Journos Lobby for Minority Chief of Staff, Cops Having ‘Comfort’ With Violence
Travel companies are ‘greenwashing’ — here are 3 ways to find ones that aren’t