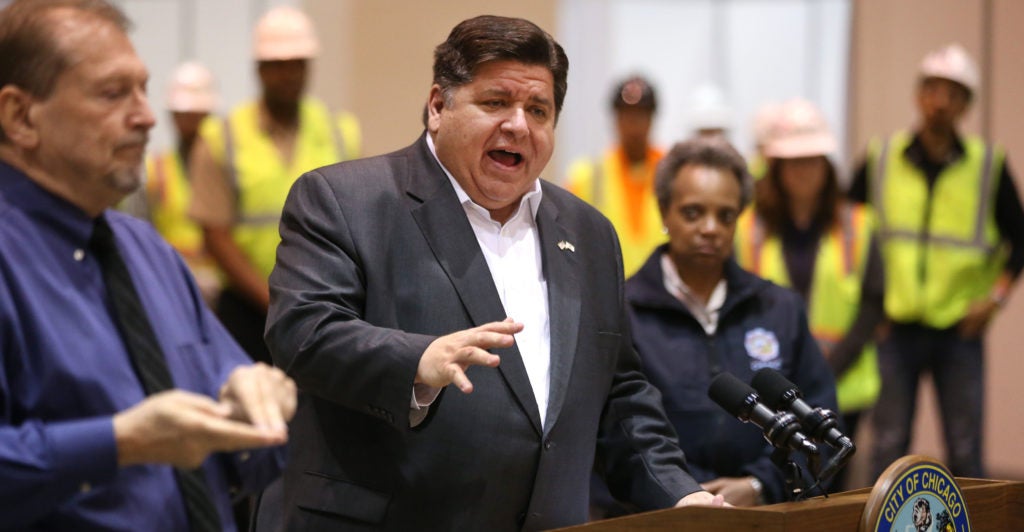 Those who would be most harmed by a $40 billion federal bailout of the state of Illinois are the people of Illinois, a Republican state senator says, because such an aid package would reward and reinforce irresponsible behavior by the state’s politicians.

“The people of Illinois are hurting,” state Sen. Jason Plummer, a Republican who represents Illinois’ 54th District, told The Daily Signal in a phone interview. “We have high sales taxes, high income taxes. People are being forced to leave the state, and now they want to bail out politicians’ mismanagement.”

Plummer stressed that the financial mismanagement in the state long preceded the economic hit that Illinois and every other state have taken from the COVID-19 pandemic that shut down the economy, resulting in plummeting tax revenues.

The Illinois request for funds comes as congressional Democrats have used the COVID-19 crisis as grounds for a major bailout for state governments, even after billions in federal dollars have gone to the states.

One financial analyst noted that Illinois’ fiscal problems were “decades in the making.”

Plummer and others contend that any federal aid package must have strings attached to require reforms in budgeting and pension funding.

“Illinois has a reputation for extreme corruption, and the American people shouldn’t be asked to subsidize corruption,” he said.

Four Illinois governors have been convicted of crimes during or after their governorships in the past half-century, most recently Democrat Rod Blagojevich, who was impeached and removed from office in 2009 and convicted in court in 2010, and his predecessor, Republican George Ryan, convicted in 2006, about three years after leaving office.

Illinois Senate President Don Harmon, a Democrat, has asked the state’s congressional delegation to seek a federal bailout of more than $40 billion that includes money for things not related to relief from the coronavirus.

Harmon’s request includes a $15 billion block grant; a $10 billion pension bailout; $6 billion for the state’s unemployment insurance trust fund; an increase in the share of Medicaid paid for by the federal government to 65%, up from 50.96% in a typical year;$1 billion in health care grants to poor and minority communities; and $9.6 billion in direct aid to municipalities.

Harmon said in the letter to members of Congress that the money is needed to “stabilize the state’s budget,” and conceded, “I realize I’ve asked for a lot, but this is an unprecedented situation,”

Illinois Gov. J.B. Pritzker reportedly is not on board with Harmon’s proposal and is only seeking federal funds to offset economic losses resulting from COVID-19, comparable with other states.

“It looks like, you know, there is real support on the Republican side and near-unanimous support of the Democratic side for support for the states,” Pritzker, a Democrat, said Sunday at a press conference.

The pension funds have a 3% annual cost-of-living adjustment benefit, even though the consumer price index for the past decade has been about 2.2% annually.

Even if state lawmakers had the will, reforming the Illinois pension system isn’t an easy task for the state. The state Supreme Court ruled in 2015 that reforms would be illegal because under the state constitution, the pension benefits are a contract.

That came after the state Legislature passed a modest change in 2013 that tied future annual benefit increases to inflation, which was characterized by the state employees lobby as a “cut.”

The 1970 amendment to the state constitution made public pensions a contract for life. That’s in contrast to federal laws governing private pensions that bar cuts to benefits already accrued, but allow flexibility for future benefits not yet earned.

Making changes would not require a constitutional amendment, said Adam Schuster, budget and tax research director at the Illinois Policy Institute, but it would be the most direct way to fix the problem.

“The least controversial would be for Illinois to amend its constitution, which is something we’ve been supporting for about two years now,” Schuster told The Daily Signal.

“There are some other legal theories out there suggesting they might be able to do it without an amendment, either by relying on a federal law, such as a pension-specific bankruptcy provision, or by going back to Illinois courts and making the ‘police powers’ argument,” Schuster said.

“Police powers,” in this instance, mean states cannot bargain away their core sovereign duties and that contracts can be modified in reasonable ways when required for an important public purpose—in this case for keeping public health and safety programs running during a pandemic.

Illinois has already received more than $3.5 billion from the federal CARES Act relief package for COVID-19 response, as well as $1.4 billion to be divided among Chicago and the state’s five largest counties, according to the Illinois Policy Institute, a think tank promoting fiscal responsibility. Further, the Federal Reserve set up a two-year loan program for state and local governments.

In a report issued in April, the Illinois Policy Institute called for three primary preconditions if the federal government opts to bail out Illinois.

The first is a “requirement that pension systems be built on sound funding plans with benefit structures that help protect taxpayers from risk, along with mandatory benefit reform in states where pension systems cannot be made solvent without increasing taxpayer costs.”

Finally, the think tank called for “[r]estrictions on when lawmakers can make withdrawals from rainy-day funds and procedures for making automatic deposits during growth years.”

The state hasn’t had a balanced budget since fiscal 2001, and has the second-worst net debt compared with other state economies, behind only New Jersey, with debt per taxpayer equaling $52,600, according to Truth in Accounting, a financial watchdog.

Pension spending has increased 501% since fiscal 2000, but the pension systems have a combined total of $138.6 billion in unfunded liabilities, according to the institute.

With regard to budget reserves, Illinois ranked 45th among states for rainy-day funds from 2005 to 2018, with just 0.8% of the state budget set aside for a rainy-day fund, compared with the average among all states of 4.6%, and the median was 8%, according to the institute. Illinois is also one of just 11 states that have no balanced-budget requirement on its books.

Conditions on bailout funding certainly have precedent without violating tenets of federalism, Schuster said. The same is true when the International Monetary Fund bails out a country, as happened with Greece. Conditions were also put on the Troubled Asset Relief Program, the $700 billion federal taxpayer bailout for banks in 2008.

A bailout without strong requirements now would not only not address the roots of Illinois’ problems, but would be a bad example for other states of consequence-free spending, Schuster said.

“The analogy is, if a recent college graduate gets a nice apartment, goes out to eat at nice restaurants, and gets a really nice car, then comes back to his parents to ask for money,” Schuster said, “the respectable course for parents is to say, ‘Yes, but you have to change your lifestyle. Otherwise, we don’t want to send the message to your brother that this behavior is OK.’”

Even a strings-attached bailout would have mixed results, cautioned Rachel Greszler, a research fellow in economics, budget, and entitlements with The Heritage Foundation.

Puerto Rico’s financial oversight board didn’t force all the needed reforms as politics came into play, Greszler noted. The same has been true when several municipalities have declared bankruptcy, which were not always orderly and often were complicated with litigation.

In the 1990s, Illinois pensions made up 4% of the state’s expenses. Today, the pensions account for more than 20%, Greszler said.

“Illinois’ problems were decades in the making. A federal bailout would prevent needed reforms,” Greszler said. “Certainly, there were states not prepared for COVID-19. But [the states] weren’t off by a couple of months, they were off by  decades.”