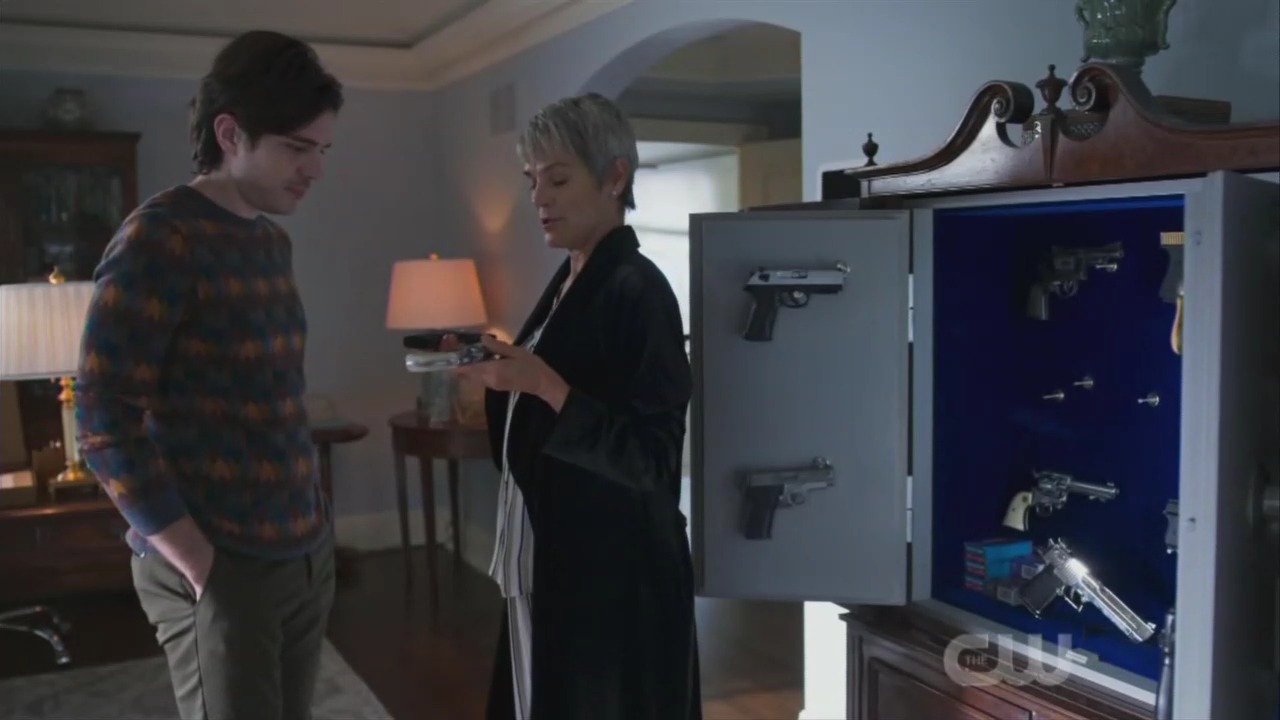 In season two of CW’s In the Dark, Murphy (Perry Mattfeld), Jess (Brooke Markham), and Felix (Morgan Krantz) are in the shady business of laundering money for crime boss Nia (Nicki Micheaux). To better protect himself, Felix decides to borrow a gun from his mother.

Felix’s mother is regarded as a cold-hearted conservative who cut her son off financially. She’s chock full of remarks like asking about his lesbian friend, Jess:

Felix: I am… seeing someone. Pretty serious.

Felix’s Mother: Oh, is it that, uh, Jess friend of yours?

Felix’s Mother: Who isn’t these days?

She also cautions her son to “use protection” with his crush, Chelsea (Lindsey Broad), since “I don’t need you knocking up some bartender.” What a pleasant woman.

When Felix’s mother agrees to give her son a gun, she tells him, “I’m proud of you. You have a right to defend yourself.”

Murphy and Jess are not as enthused about the gun Felix has:

Felix: I leave for three hours, and everything falls apart.

Jess: Felix, where were you?

Murphy: Where did you go?

Jess: You bought a gun? What?!

Murphy: Are you kidding me?

Felix: I borrowed a gun from my mom.

Jess: Felix… …You know that having a gun makes you more likely…

Jess and Felix: …To be the victim of gun violence.

Felix: Yes, I do know that, but… It makes me feel safe, okay?

Jess: You are not having a gun in this building.

Felix: I have to put it somewhere.

Though such a claim about gun violence is espoused by liberals, John Malcom and Amy Swearer for the Heritage Foundation address this and other myths liberals spread about gun control.

Specifically addressing this myth, Malcom and Swearer point out that “Higher rates of gun ownership are not associated with higher rates of violent crime:”

Many liberals tend to cite a Harvard study by David Hemenway to make their claims, which has been analyzed and debunked by Reason, among others. When it comes to the question of is “Having a Gun in the Home Inherently Deadly,” there are more dangerous risks than owning a gun, such as doing drugs, being a renter, or living alone. Concerning suicides, “a previous Harvard-published study demonstrated that even total gun bans do not lower suicide rates,” as Breitbart points out. Furthermore, studies show that many more lives are saved than taken with the help of a gun.

Viewers certainly can’t expect such honesty from CW’s liberal In the Dark. Instead, as is typical, viewers are once more subject to misleading anti-gun PSAs.

Wow! FOX News Sidelines Lara Logan After Dr. Fauci Complains About Her Nazi Doctor Comparison
Democratic Senator Calls for ‘Revolution’ if Roe v. Wade is Overturned
Soros-Backed DA Larry Krasner Freed a Suspected Carjacker to Become a Suspected Murderer
Omicron May Be Dud, But It Still Made Things Worse for Biden
16-year-old was lured to a party only to be viciously attacked by his peers, family says. He’s been unconscious in the ICU ever since.