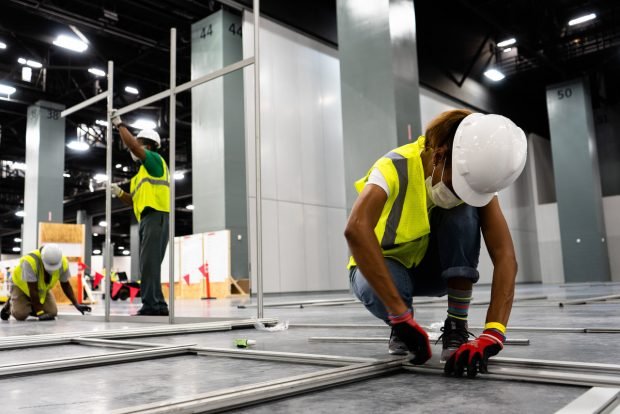 In February, residents of Miami Beach, Florida, weren’t thinking about global pandemics. They were thinking about the 80,000 visitors flooding the Miami Beach Convention Center for the NFL Experience and Super Bowl LIV.

A lot can change in two months. Billboards on I-95 still hype the big game held Feb. 2, but ever since the governor issued his “Safer at Home” order, there haven’t been many drivers on the road to see them.

The Miami Beach Convention Center has changed a lot in that time, too. Just two years after receiving a $620 million makeover, the center will not be hosting Super Bowl fans, car shows or boat shows for a while. Instead, it will be part of a federal, state, county and local government response to build enough hospital beds to support local hospitals and avoid a medical system collapse during the COVID-19 pandemic.

“We’ve been in the Miami area looking at different places we could build alternate care facilities since mid-March,” said Army Lt. Col. Todd Polk, the Army Corps of Engineers Jacksonville District’s deputy commander for South Florida. “Having teams in the field early really paid off. By the first week in April, we had our assignment and shipped a team down to the Miami Beach Convention Center to begin construction.”

The Corps of Engineers jumped into action after the Federal Emergency Management Agency issued the mission to begin converting the convention center April 4. District contract officers awarded the work to Robins and Morton Group just two days later, with construction beginning the next day.

“The initial requirements were not even completely ready,” said Army Col. Andrew Kelly, the Corps of Engineers Jacksonville District commander. “We often use the analogy of building an airplane while we fly it a lot, but it was really true in this case. We were making multiple changes to the plan every day for the first week of construction. Crews were working 24 hours a day, so we would make a decision to change something and the contractor was executing it immediately.”

All of this was scheduled for completion by April 27. But the state didn’t have until April 27. On the second day of construction, Florida Gov. Ron D. DeSantis visited the site and met with Army Lt. Gen. Todd Semonite, the Corps of Engineers commander and chief of engineers.

“The governor just sat with me in the trailer behind us and said ‘You’ve got until the night of the 20th of April,’” Semonite said during the news conference that followed. “There’s no time to design and build it. We have a suspense, and we have to get it done.”

That put the pressure on the Jacksonville District team and the contractor, Polk said.

“Instead of three weeks, we had two,” he said. “We were already looking at 24-hour shifts and a tight deadline. Add in the complication of requirements being refined in real time and the difficulty everyone in the nation is facing when ordering the medical equipment, and what was a hard assignment became one of the most challenging we’ve ever faced.”

So what did the Jacksonville District do when facing a shortened deadline and a Herculean task? It delivered the facility ahead of schedule, with construction being completed April 18 and the keys handed to the Florida Division of Emergency Management on April 19.

A lot of factors were involved in the success, Kelly said. National support from the Corps of Engineers on supply chains, enough funding, a willing partnership with the city and county government, and a dedicated team on the ground working with the contractor. But the factor that really stood out was the way the state worked to provide the requirements needed to complete construction, he added.

“The biggest concern I had was being able to make the decisions that needed to be made at the right time,” Kelly said. “Tallahassee gave us exactly what we needed. They were able to say what we should do, what needed to adjust in the plans, and make rapid and effective decisions. It was immeasurable for those of us out here daily on the site to not have to wait for a decision.”

The Jacksonville District also benefited from the expertise of the Florida National Guard for advice during the build.

“The partnership the Florida National Guard established with the Army Corps of Engineers during the construction of the Miami Beach alternate care facility has been exceptional,” said Army Col. Ricardo Roig, the commander of the Florida National Guard’s Task Force 50th. “We are grateful for the Corps’ hard work getting this facility completed, and are working with our state partners to provide all necessary support to ensure it is ready to operate.”

As the owner of the convention center, the city of Miami Beach was also largely responsible in completing the project early, Kelly said. The city’s cooperation was especially important, considering that the alternate care facility was designed to provide flexibility to local medical systems in response to COVID-19.

“We are grateful to the Army Corps of Engineers for swiftly constructing the alternate care facility at our Convention Center — a precaution to assure that we are fully prepared for a worst-case scenario and that our community will never face shortages of beds or equipment,” Miami Beach Mayor Dan Gelber said. “Hopefully, it won’t ever be occupied.”

(James Yocum is assigned to the Army Corps of Engineers.)

Content created by Conservative Daily News is available for re-publication without charge under the Creative Commons license. Visit our syndication page for details.