America’s cultural suicide is gaining momentum. Two professions that are the bedrock of a successful culture are rotting from within. Education informs and civilizes our nation’s youth and prepares them to assume a productive role in society. 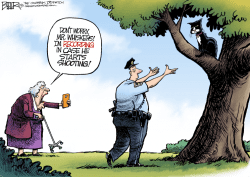 Both professions require dedicated, motivated employees with high morale. The politicians who oversee education and law enforcement, and the administrators politicians select to supervise, are driving those employees out.

Their defacto National Enforced Apathy Policy culls the wheat from the chaff and then tosses the wheat.

Over the last decade the elites who run the culture have moved on from the War on Crime to a War on Police. Crime victims are no longer the people robbed, raped or murdered. Now the victims are the people doing the robbing, raping or murdering.

Travis Yates, at LawOfficer.com, writes, “[O]fficers are more scared of YouTube than violent criminals and they know that many in leadership roles are either silent or will throw them under the bus for just about anything.”

And the viral video is just the beginning. Politicians with no idea of what happens on the street will sit in judgement safe in the knowledge they can’t go wrong if they condemn the officer’s actions. Chiefs of Police — appointed by those same politicians — wait for the high sign from the mayor’s office before rendering a verdict. And news poodles interview the loudest voices and solemnly announce the “community” is concerned.

With the exception of some members of the “community,” most of these people sitting in judgement live quiet lives. The closest they come to a physical struggle is when the cork breaks off in the neck of their wine bottle. They have no frame of reference for police work.

It often requires violence to force suspects and lawbreakers to comply. If verbal commands were all that was needed, Fauxcahontas could enforce the law.

Officers most likely to star on YouTube are officers who are the most pro–active. They’re out of the cruiser and talking to suspicious individuals. They investigate when their instincts tell them something is wrong. They make more traffic stops and have more contact with the public.

Each time they set foot outside the cruiser it increases their chances of an encounter that turns violent and cinematic. Even encounters that don’t generate video, generate complaints because the high self–esteem community doesn’t like cops cramping their style.

Yates found officers nearing retirement are leaving at the first opportunity. Officers with 10 to 19 years on are “some of the most miserable in our profession.” And officers with up to nine years “have now realized that they work in the only profession that can ruin you for doing nothing wrong.”

Formerly pro–active officers now are indistinguishable from the department’s dead weight. They roll slower to hot calls. On scene they wait for a supervisor before acting. They stay in their cruiser until dispatched. They are reactive at best.

They stay in the good graces of the command staff by writing reports that reduce crime rates through creative word processing.

The only people shortchanged are the victims of crime that could have been prevented and residents of neighborhoods where the cops have ceded control to the criminal element.

The same conditions exist in education. Motivated teachers with standards also cause problems. They assign work. They have creative lesson plans. They want students to pay attention. They take attendance. They expect work to be turned in on time.

Just like in police work the good teachers are leaving the profession. What remains are popular teachers who go–along–to–get–along. They aren’t hung up on attendance. They stay behind the desk updating their Facebook page. There are no discipline problems because the teacher doesn’t expect a disciplined classroom. Every student gets at least a ‘C’ regardless of work.

The only real difference between the inert cop and the inert teacher is politicians aren’t promising to raise the salaries of the inert cops.

These two twisted, self–defeating standards, imposed by our clueless, leftist elites, serve to accelerate cultural suicide. When the actions and attitudes of the criminal element determine law enforcement policy and the actions and attitudes of oppositional students determine education policy you create a dangerous culture dominated by the uneducated and the out–of–control.

Significant majority in poll believe US recession likely in the next 12 months
On Thanksgiving, Let’s Give Thanks to God
Some Questions for Blake Masters
Reporter Praised for Pressing Trump GRILLS Tlaib on Ending Prisons, Liberal Media Yawns
Mr. Goxx, R.I.P.