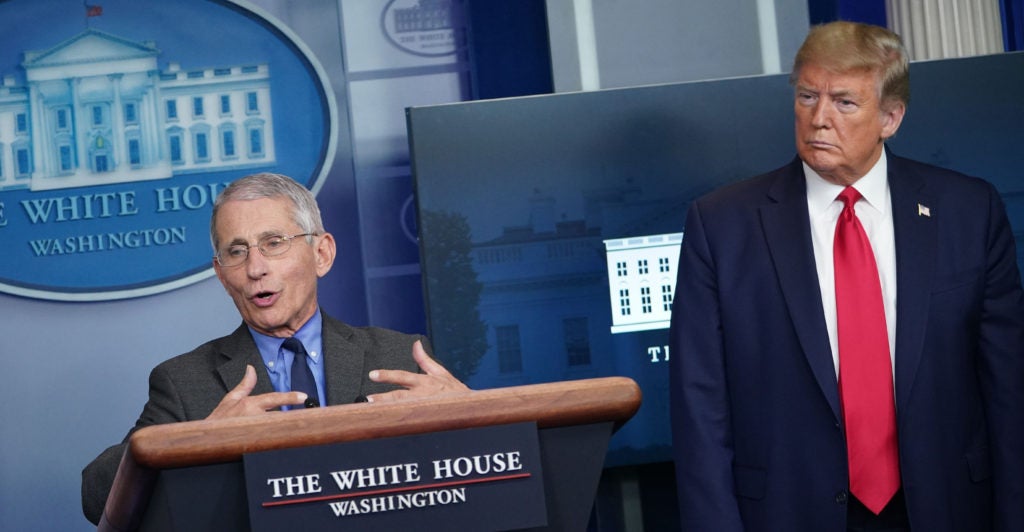 President Donald Trump lashed out again Monday evening at the “fake news,” played a short video about media coverage of the coronavirus crisis, and affirmed his support for government immunologist Anthony Fauci’s key role in fighting the pandemic.

The president’s focus on the media at the beginning of the White House coronavirus task force’s daily briefing followed reports of a rift sparked by a comment from Fauci during an appearance Sunday on CNN.

Fauci, the longtime director of the National Institute for Allergy and Infectious Diseases, responded at one point during the interview: “You could logically say that if you had a process that was ongoing and you started mitigation earlier, you could have saved lives.”

CNN and other media outlets covered the remark as Fauci’s criticizing Trump’s handling of COVID-19, the disease caused by the coronavirus.

Trump, later Sunday, retweeted a tweet in which an observer called for the firing of Fauci. The White House almost immediately denied any plans to do so.

“Hypothetical questions can sometimes get you into some difficulty, since it is what would have or could have [happened],” Fauci said shortly after the opening of Monday’s press briefing.

“I’ve been up here many times telling you mitigation works and [if] you initiate it earlier, you will probably have saved more lives,” he said, referring to such guidance from the government as washing hands and social distancing. “If you initiate it later, you probably would have lost more lives.”

Fauci stressed that Trump all along has listened to advice both from him and from Dr. Deborah Birx, response coordinator for the White House coronavirus task force. He said:

The next, second time, I went with Dr. Birx into the president and said ‘Fifteen days are not enough, we need to go 30 days,’ obviously there were people who had a problem with that because of the potential secondary effects. Nonetheless, at that time, the president went with the health recommendations and we extended it another 30 days.

The mild-mannered Fauci seemed to grimace with disgust when a reporter asked, “Are you doing this voluntarily?”

Fauci responded: “Everything I do is voluntarily. Please, don’t even imply that.”

Trump stressed that he had no intent to terminate Fauci, who is not a political appointee, in his role on the task force.

Asked about the tweet, Trump replied: “I retweeted somebody, I don’t know. They said fire him.”

Asked if he noticed it was in the tweet, the president answered, “I notice everything.”

Trump then showed a five-minute video on the screens of the briefing room promoting the administration’s response to the spread of the coronavirus, which included media figures and Democrats early on scoffing at the notion that the virus would become harmful to the nation.

It also included prominent Democrats such as New York Gov. Andrew Cuomo and California Gov. Gavin Newsom saying that Trump was responsive to the needs of their states.

“I think I’ve educated a lot of people as to the press,” Trump said later. “I would love to be able to say we’ve got a very honest press.”

When a reporter said the video was something like a campaign ad and asked who put it together, Trump responded: “That was done by a group in the office.”

“We just put some clips together,” the president said. “I bet you I have 100 more clips that are even better than that. They were just pieced together over the last two hours. We have far better than that. …  We’re getting fake news, and we wanted to have it corrected.”

Trump ripped into The New York Times in particular for a news story last week that was critical of the administration’s response, saying, “If you had libel laws, they would have been out of business even before they will end up going out of business.”

On other fronts, one reporter challenged Trump’s authority to decide when and how to reopen the national economy.

“I have the ultimate authority,” he replied, and later said, as similar questions continued, that the White House would make the case in writing.

Another reporter asked Trump why there have been “no consequences” for China for its disinformation campaign about the coronavirus. COVID-19 began in the Chinese city of Wuhan, but Chinese officials did not inform its own population or the rest of the world about the severity of the spread.

Trump snapped at the reporter: “How do you know there are no consequences? You would be the last person I would tell.”