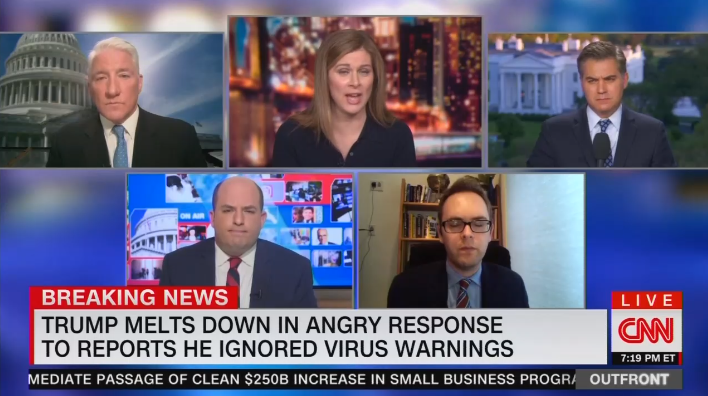 CNN couldn’t stand the heat so they bailed out of Monday’s Coronavirus Task Force press conference and dove right into some unhinged hot takes. While they insisted President Trump was the one who was raging, the OutFront panel was clearly irate as they threw out a flurry of insults and unsupported accusations all in an effort to blame the over 23,000 coronavirus deaths in the U.S. on the President. And according to Jim Acosta, “conservative media” also had blood on their hands.

Towards the end of their almost 15-minute hate fest, Acosta blasted Trump for “downplaying the severity of this virus” for “a month and a half.” “He was describing it as something like the seasonal flu, when it’s not,” he declared as he targeted right-wing media outlets.

“He’s trying to talk his way out of a mess he created himself; over the past 45 to 60 days both he and members of the conservative media were in this echo chamber saying to one another that the public did not have to worry about this,” he sneered. Fact-check: LIE.

In the early days of the pandemic, the liberal media had decried Trump’s move to ban travel from China as an overreaction. This collage of headlines tweeted out by conservative commentator Dan Bongino showed a USA Today headline from February 1 that proclaimed: “Coronavirus is scary, but the flu is deadlier, more widespread.” And the Associated Press said on February 18: “Is the new virus more ‘deadly’ than flu? Not exactly.”

Headlines such as those, played a key role in a video the President showed to the press at the start of the briefing. The video depicted the timeline of what the administration had done, while rubbing the media’s nose in their terrible reporting. But according to chief national correspondent John King and media janitor Brian Stelter, it was an “anti-media” “propaganda video.”

King asserted “the briefing was breathtaking” and “bordered on dangerous.”

He added that “The President began with a propaganda video. He played it in the room, that cherry-picked moments.” “He started this briefing with an anti-media propaganda video, which is nothing short of disgraceful. But it also shows us where he’s coming from,” Stelter said for his part. He also insisted that Trump didn’t care at all about the people and families suffering:

And after CNN and the rest of the liberal media had spent days demanding that Trump issue a national lockdown over all states, King demanded Trump read the Constitution to see he couldn’t order them to open their economies. “But to have a President of the United States after he runs a propaganda video in the White House briefing room say, my authority is ‘total,’ the Constitution says otherwise,” he chided.

In Acosta’s first round of comments, he declared the briefing to be “the biggest meltdown I have ever seen from a president of the United States in my career.” He then preceded to exercise his nonexistent degree in phycology and comment on Trump’s mental state: “I don’t think a reasonable person could watch what we just saw over the last hour and conclude that the President is in control. He sounds like he is out of control.”

He also appeared to let the cat out of the bag for what their whole production was about when he regurgitated the old “the walls are closing in on him” line the media used during Trump’s impeachment. Acosta also noted that “the public is going to be reminded of this from here until the end of the year,” when the 2020 election was held.

This is CNN: unhinged.

ERIN BURNETT: That was President Trump giving the latest update on the pandemic. The President was very angry; if you were watching that. Over the past hour and a half or so trying to rewrite history regarding his response to coronavirus. Coronavirus, as of today, has killed more than 23,000 Americans. I want to get straight to our panel who has been standing by, as we all have been watching this. John King, let me start with you. The President was extremely angry and lashing out, frankly, multiple times at various reporters.

JOHN KING: Erin, the briefing was breathtaking from beginning to when we dropped out. And at times bordered on dangerous. The President began with a propaganda video. He played it in the room, that cherry picked moments. In this is a “Trump is awesome” video at taxpayer expense played in the White House briefing room, that left out all the – Look, the President has done some things right. We need context, we need nuance as we go through these things.

But the President bristles at the suggestion he’s done anything wrong like saying there will not be a pandemic, anybody who needs a test will get a test, this going to go away in April when it gets warm. I could go on.

All that was left out. We had a “Trump is awesome” propaganda video, and then in the conversation about reopening, this is where it gets dangerous. The President needs to read the constitution of the United States of America. Even in a national emergency, the President’s power is not as he said “total.” He said the President’s authority is “total.” The president calls the shots. The president will tell the governors what to do, and seemed to almost intimidate them by saying “they need things from us, when I tell them to reopen the economy they will do it.”

The governors don’t see it that way. They want to work with the administration, they hope, in two weeks when the guidelines in place are up, things look a lot better, and they can work this out. The Vice President had a more nuanced approach. Some states are different, we’ll work it out. But to have a President of the United States after he runs a propaganda video in the White House briefing room say, my authority is total, the Constitution says otherwise.

JIM ACOSTA: That’s right, Erin. And I have to tell you that is the biggest meltdown I have ever seen from a president of the United States in my career. I don’t think a reasonable person could watch what we just saw over the last hour and conclude that the President is in control. He sounds like he is out of control. And he was ranting and raving for the better part of the last hour during that news conference.

As John King was just saying he’s claiming he has authorities that he doesn’t have. The Constitution does not give the President of the United States total authority, and I thought it was very illuminating at Vice President Mike Pence got up there at the podium and described the President’s authority as plenary or absolute. That is not the case. That is a fact-check: false.

But getting to your question, Erin, I do think to some extent the President is realizing that the walls are closing in on him when it comes to managing this crisis. He ignored the severity of his crisis for a couple of months, and now he’s trying to seize control over the situation as governors are going off on their own and coming up with their own plans.

And one very important thing to keep in mind, Erin. Throughout all of this and that one of the most trusted people in America right now, Dr. Anthony Fauci despite the fact he had to fall on his sword a little bit during that press briefing he is talking to these governors individually. He is getting on the phone with these governors periodically from time to time and helping them formulate these reopening plans of their own.

And so, to some extent, top health officials and governors are working around the President for precisely the reason we just saw unfold in front of our very eyes in the last hour, and that is the President doesn’t like he’s in control on multiple levels, Erin.

He’s focused on the past. He wasn’t talking as much about the present or future. Yeah, finally, later in the briefing he evenly got around to talking about the government’s response to the virus and what’s happening now. But he was so fused on the past, Erin.

And I found myself thinking of people in hospital wards who [shakes head in faux frustration] they don’t want to talk about the past. They want to talk about right now. They need help right now. But the President is not showing empathy for those people. He’s not showing compassion for the families that have lost loved ones. Instead, he’s trying to play small ball. He’s trying to fight against the media because that works for him. Cultural war fights work for him. He knows how to do those. He’s good at those.

But I think we have to keep focusing on the questions he’s not answering about the lack of testing, lack of plan to get us out of this mess. That’s what he doesn’t want to talk about. And so he attacks the media instead. And I hope most people can see through it. You know, it’s been one month, Erin, since he said, “I don’t take any responsibility at all”. And this was sort of a repeat of that.

ACOSTA: That’s right, Erin and, you know, the President was trying to argue his way out of the Fauci controversy by saying, “Well, you know, when Dr. Fauci was telling us to start social mitigation that’s when we started it.” But that totally avoids the point you’re making, Erin. And that is for the better part of a month, a month and a half, the President was downplaying the severity of this virus.

And we should point out numerous fact-checking organizations have pointed out that is just false. When the President says I inherited an empty shelf, empty cupboards, that is false. There were supplies in the national stockpile when the Trump administration came into office. That is just a flat out lie he repeats over and over again, and it goes to the problem he’s having.

He’s trying to talk his way out of a mess he created himself over the past 45 to 60 days both he and members of the conservative media were in this echo chamber saying to one another that the public did not have to worry about this, when clearly his own administration should have been preparing for the pandemic that unfolded. Perhaps not to the severity we’re seeing right now, but obviously they had time to get ready. The President had time to get the public ready.

Remember there were red states very late to issue their own stay at home orders, stay at home guidance. That’s because in part they were listening to the President. They were listening to the man they put above almost everything else in politics these days, arguably above everything else in politics these days, and it cost the American people precious time. And I just don’t think there’s any way to avoid that.

The President is trying to delete days and days of footage that just are never going to go away. And the public is going to be reminded of this from here until the end of the year. Erin, part of the problem I think is the President has a temperament issue, and you and I have seen this since the 2016 campaign. Jeb Bush described him as the “chaos candidate.” He became the chaos president, but what the American people want right now, and they’re not getting, is a coronavirus president. And a chaos president just isn’t fitting the bill.