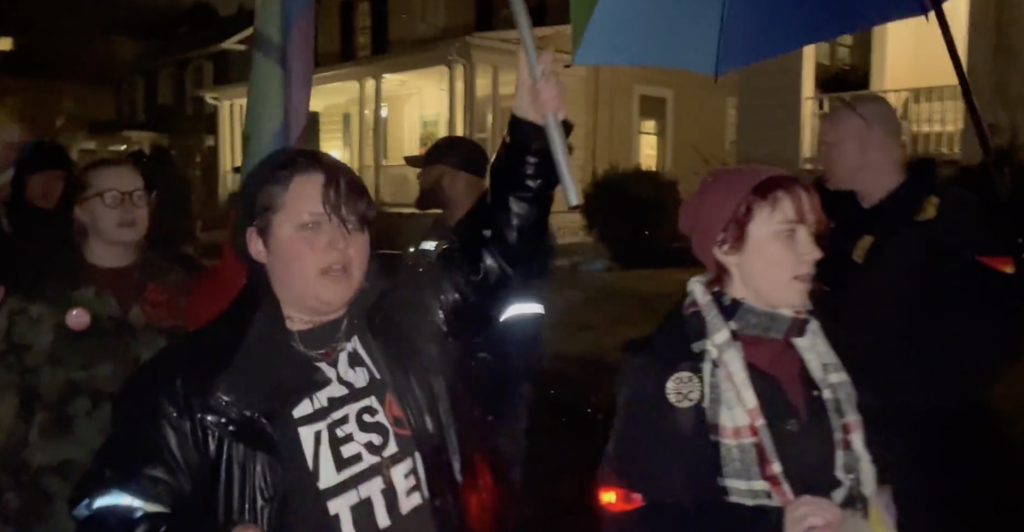 Icy rain drizzled down on the wealthy Maryland neighborhood as about 20 activists, organized by the protest group Our Rights DC, marched up and down the sidewalk in front of Kavanaugh’s home.

The protesters carried rainbow umbrellas decorated with pro-abortion slogans, singing and chanting as they marched, “cut his time short, a rapist should not rule the court,” “freedom of religion means freedom from yours,” and “no privacy for us, no peace for you.”

A number of U.S. Marshals, who protect the federal courts, were stationed just above the sidewalk on Kavanaugh’s property. The singing and chanting activists processed by the authorities using the sidewalk.

The Daily Signal asked the Marshals why they allowed the protesters to continue their demonstrations when 18 U.S. Code § 1507 forbids picketing or parading “in or near a building or residence occupied or used by such judge, juror, witness, or court officer” (both Maryland and Virginia law also prohibit picketing to disrupt or threaten to disrupt that individual’s “tranquility in his home”).

Several of the Marshals, who did not share their names, told The Daily Signal that the activists were not on Kavanaugh’s property, merely the sidewalk, and thus were not violating the code. The Daily Signal pointed out that the language of the code specifically says “near or on,” but the Marshals still said that the activists were within the law since they were on the sidewalk.

The authorities also repeatedly mentioned the First Amendment and free speech and said that the activists had the right to demonstrate as long as they were within the law.

Outside Supreme Court Justice John Roberts’ house, at least three Marshals expressed concerns that arresting the leftist activists would have a snowball effect and prompt more activists to descend upon the neighborhood, remembering the unrest that took place during rioting over the death of George Floyd, a black man who died in 2020 after a white Minneapolis police officer knelt on his neck for 9 minutes and 29 seconds.

“More and more would come,” one Marshal said.

The Marshals also speculated that the pro-abortion protesters hoped to gain attention and notoriety by being arrested — another Marshal suggested that the protestors would enjoy being “martyrs.”

The authorities also expressed the belief that the judges in Washington, D.C., Virginia, and Maryland would toss out any cases brought to them involving the leftist activists who have been protesting at the homes of the Supreme Court justices since May, when someone leaked the draft opinion indicating that Roe v. Wade would soon be overturned.

The unprecedented leak sparked protests throughout the country, attacks on scores of pro-life centers and faith-based institutions nationwide, and even an assassination attempt against Kavanaugh. Justice Samuel Alito said that the leak made the justices “targets for assassination.”

“It was a shock because nothing like that had happened in the past,” Alito said of the leak in October. “So it certainly changed the atmosphere at the court for the remainder of last term.”

“The leak also made those of us who were thought to be in the majority, in support of overruling Roe and Casey, targets for assassination because it gave people a rational reason to think they could prevent that from happening by killing one of us,” he added during remarks at The Heritage Foundation. (The Daily Signal is the news outlet of The Heritage Foundation.)

One of the protesters who leads groups to the justices’ homes, Nikki Enfield, was arrested for disrupting Supreme Court oral arguments in November. U.S. District Judge Amit Mehta sentenced Enfield and her two fellow protesters on Jan. 13 to unsupervised probation until June 30 of this year. The judge also barred the women from the Supreme Court grounds.

“TONIGHT!! Join me in annoying the pants off the fascists!!” tweeted Enfield on June 1, 2022 as she urged pro-abortion activists to protest outside both Kavanaugh’s and Alito’s homes. Her tweet, posted just a week before a man would attempt to assassinate Kavanaugh, included a Chevy Chase address meeting point close by to the justice’s home.

Carmakers face a crossroads as they work to fit auto dealers into their EV plans
‘Hawkeye’ actor had been trying to protect his adult nephew when run over by snowplow
US and Germany reportedly preparing to send tanks to Ukraine
Cramer’s lighting round: Teck Resources is a buy
Alliance of Big Tech, Dark Money Groups Partners With Counties in State That Bans ‘Zuckerbucks’ for Elections