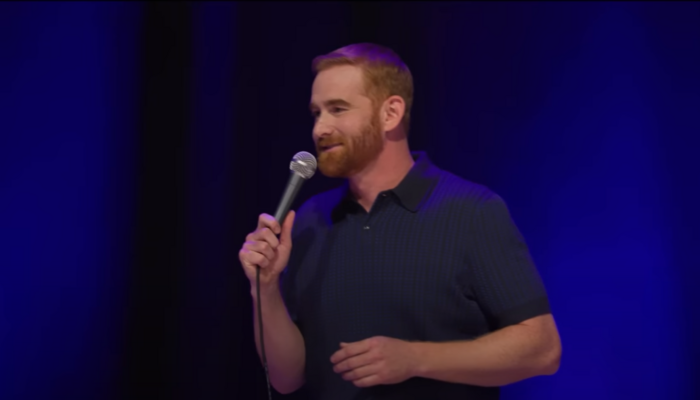 Netflix has a funny way of promoting its comedy specials.

The streaming giant doesn’t always offer its stand-up hours to reviewers for pre-release coverage. The company also limits the number of pre-approved “stills” provided to journalists for various one-hour events.

Netflix’s latest move, though, is a head-scratcher.

The company recently released “Andrew Santino: Cheeseburger.” The comedy special from the Left-leaning comic touches on Climate Change, free speech and his disdain for politicians.

Netflix subscribers know that when they scroll through its lineup they get short teasers of the content in question. If your cursor lands on “Glass Onion,” for example, you’ll get a short scene with co-star Dave Bautista firing a gun into the sky to the shock of his fellow guests.

When subscribers let their cursor hover on the rectangular tile for “Cheeseburger,” here’s what they get.

“I was shocked Trump lasted four years. Four years was wild to me. And nobody, you know, nobody,” he says, his voice trailing off as the audience begins to titter.

“Nobody?” he asks while making a gun-like gesture with his hand and making the sound of a gun going off.

“Not once? I’m not advocating for killing a president, but we used to try,” he adds.

Santino’s bit is clearly in the realm of comedy, and therefore deserves a vigorous defense. It’s also different than what Johnny Depp infamously said at the Glastonbury Festival in 2017 about President Donald Trump.

“When was the last time an actor assassinated a president? I want to qualify, I am not an actor. I lie for a living … however, it has been a while and maybe it is time.”

Depp later apologized, alleging the comments were said in jest.

Other celebrities have also wished death on Trump in a serious fashion, including Charlie Sheen and Joss Whedon.

It’s still a curious way to promote Santino’s special. For starters, the comedian isn’t a far-Left type a la Marc Maron, Stephen Colbert or Margaret Cho. He’s no conservative, but his approach is more measured and able to attract a wider audience.

Plus, the snippet might scare off liberal subscribers exhausted by Trump Derangement gags at this point.

Netflix deserves plenty of credit for standing up for free speech in recent months. The streamer stood by Dave Chappelle after a relentless Cancel Culture attack for telling jokes deemed “anti-trans.”

Whoever chose that Santino snippet out of the hour-long “Cheeseburger” may be doing the company more marketing harm than good.