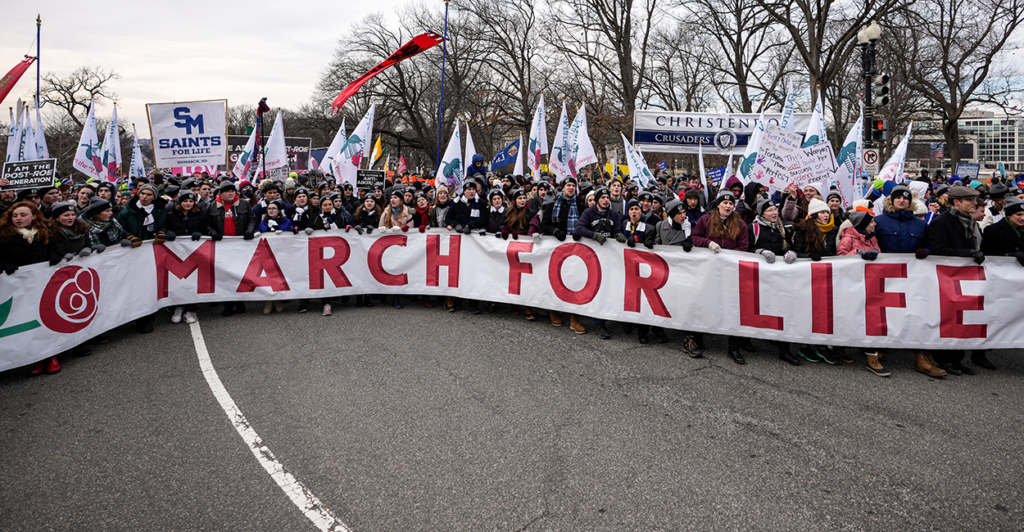 The Rev. Dean Nelson, executive director of Human Coalition Action, shares what he thinks is next for the pro-life movement.

“I think that the key strategy moving forward is, really, for a unified national rescue system. That is, having pro-life pregnancy centers, having advocacy organizations, national groups, and also having churches, really, to work in a collaborative effort to see states that would defund Planned Parenthood, like they have in Texas, to see other states have stronger pro-life laws that restrict abortion,” Nelson says.

“But more importantly, that we are together emphasizing and focusing on how we can better serve women who find themselves in these difficult circumstances,” he adds.

Our research shows, at Human Coalition, that 76% of women who are seeking abortions say that they would choose to parent if their circumstances were different. So, there’s a lot of work that we can do collaboratively to help women and rescue children.

Listen to the podcast below or read the lightly edited transcript:

Samantha Aschieris: Rev. Dean Nelson is joining the podcast today. He serves as the executive director of Human Coalition Action and the chairman of the board for the Douglas Leadership Institute. Reverend Nelson, thank you so much for joining us today.

Rev. Dean Nelson: Thank you so much for the opportunity. Excited to be here.

Aschieris: So, today is the first March for Life since Roe v. Wade was overturned last June. First and foremost, why is it important for pro-life advocates to keep marching, and what is your message to those who are marching today?

Nelson: Yeah, that’s a very important question because for 50 years, many of us who have been marching, advocating have been saying that we’ve waited for the day to see Roe v. Wade overturned. That doesn’t mean that our fight is over.

And so I hope that those who gather here today for this great march will continue to encourage people that we now have the opportunity to fight 50 different battles in 50 different states. Because with the overturning of Roe v. Wade, that simply means that our states, that people have the opportunity to restrict abortion the way that states should.

And so we’re continuing to encourage advocates and pro-lifers all around the country that the fight is far from over, and that we have great opportunity in key states to see abortion reduced.

Aschieris: We’ve seen a lot of rhetoric from Democratic politicians, claiming that black women specifically need abortions to succeed. Reverend, what do you make of that?

Nelson: It’s disheartening when I hear those kind of reports. It does clearly demonstrate that the mainstream media and others who are politically engaged and partnering with the abortion industry want to sell and to tell a narrative that is really inconsistent.

I’m proud that our work has been with many African American pro-life leaders from around the country, some who are doctors, some who are attorneys, some who are presidents of Democrats for Life, in fact, all around the country. And my hope is that at this march today and moving forward, that we’ll be able to elevate those very important voices of black women who believe in advocacy for women, but also strongly believe that abortion is not a solution for black women.

Aschieris: I want to talk a little bit more about moving ahead. And as I mentioned earlier, Roe v. Wade, many of our listeners know Roe v. Wade was overturned. And so, with that in mind, what does the pro-life movement do next? Where does it go from here?

Nelson: I think that the key strategy moving forward is really for a unified national rescue system. That is having pro-life pregnancy centers, having advocacy organizations, national groups, and also having churches really to work in a collaborative effort to see states that would defund Planned Parenthood, like they have in Texas, to see other states have stronger pro-life laws that restrict abortion. But more importantly, that we are together emphasizing and focusing on how we can better serve women who find themselves in these difficult circumstances.

Our research shows at Human Coalition that 76% of women who are seeking abortions say that they would choose to parent if their circumstances were different. So there’s a lot of work that we can do collaboratively to help women and rescue children.

Aschieris: I want to talk a little bit more about your role with Human Coalition Action and its mission relating to the pro-life movement.

Nelson: Yeah. So, one of the things that we decided at Human Coalition several years ago was not only did we see the need to raise dollars to engage with women seeking abortions, but we also saw a need to engage with states.

Many states like Texas and others had decided to defund Planned Parenthood, but they also had resources that could be used to help women who found themselves in these difficult circumstances, and these resources could also help in reducing abortions in those states.

And so we decided to start Human Coalition Action to really inform state legislatures and those also at the federal level, to understand that there were ways to reduce abortion in states and to connect women with these services that often existed—sometimes private and sometimes run by state agencies—to really help them to be involved in really kind of solving some of their problems themselves.

And as I stated, 76% of the women that we’ve surveyed and we’ve engaged over the last decade with over 100,000 women seeking abortions, we know that these type of programs work.

So we’re pleased to highlight that in states like Tennessee, Arizona, Florida, North Carolina, and other states that are interested, are willing to partner with Human Coalition through the advocacy work that we do with Human Coalition Action to really see some of these abortion numbers reduced, and to see women get the services that they need to help them in these difficult circumstances.

Aschieris: And just to shift a little bit, the new Congress is officially underway with Republicans in the House majority. What are you hoping to see policy-wise for the pro-life movement?

Nelson: Yeah. Well, No. 1, we definitely want to continue to see the idea of defunding Planned Parenthood, even though we know that it would be a tough thing to get signed by a pro-abortion president. But additionally, we would like to see advanced some form of a heartbeat bill, at least to demonstrate that we believe that life deserves to be protected at every stage and particularly at the federal level.

Additionally, Human Coalition has a number of other innovative things that we’re working with other organizations at the federal level to help advance. Some of them are unique, some of them are helping women in need, others are trying to protect conscience protections for doctors and nurses.

So there are a number of things that we really want to highlight in this Congress, but our goal is really to work in a collaborative fashion with other pro-life organizations and encourage the House to be able to stand with the number of pro-life voices that we have leading now in the House of Representatives.

Aschieris: Reverend, I’m also curious on your thoughts on what might be missed in, say, the media coverage of the pro-life movement, and even with the March for Life today. What do you think the media is missing in its coverage of both the movement and potentially the march?

Nelson: Consistently, I think the media misses out on how many young people gather at the march every year. We recognize that this mission of justice for pre-born children is not something that just old people are advocating for, but young people. I think, additionally, there are huge numbers of women. I’m proud to see that there are a number of young women that will be speaking at the march this year. And also, that there’s continued bipartisan voices that are speaking up. We certainly are grateful for the work of Democrats for Life and other legislators who are not Republican that are willing to stand up to their party.

So I think that those are some of the things that the media tends not to focus on, that it would do well.

Aschieris: If you were sitting down in the room with President Joe Biden, what message would you tell him? What would you tell him about the pro-life movement that you would want him to remember moving forward in the next two years of his presidency?

Nelson: I always start with what abortion really is. Abortion is the intentional killing of a pre-born human being. And I would say to the president, No. 1, I would try to appeal to his Catholic upbringing, that this is a position that has long been held by Catholic tradition. I would appeal to him from the standpoint that one-third of Democrats would like to see some level of restriction on abortion, and I would challenge him that he doesn’t have to hold to an extreme position.

The Democrat Party seems to be held captive by the pro-abortion industry and Planned Parenthood, and I would communicate that that is something that most Americans don’t want. Most Americans believe that there should be some restrictions. And so, whether that would fall on deaf ears or not, I’m not sure, but I think being able to demonstrate to him that there is a growing coalition of a pro-lifers that look a lot different than how his party tries to characterize our growing movement.

Aschieris: Rev. Nelson, do you have any final thoughts before we go?

Nelson: I would just encourage people to be reminded that we have a long fight ahead of us. We can celebrate the overturning of Roe v. Wade, which was very huge, but to encourage people not to give up, not to throw in the towel, that we need to work together—whether they are pro-life Americans that work in the pregnancy center movement, whether they’re pro-life Americans who support the work of some of our national advocacy organizations. But just as a reminder that we can never give up.

When the Civil War ended, slavery stopped, but we saw a rise in the Ku Klux Klan. We saw the number of lynchings of black Americans increase. And so there’s always going to be retaliation when we have successes, but we can never give up. We can never quit.

In the words of the great abolitionist Frederick Douglass, who said, regarding these matters, to “agitate, agitate, agitate.” And we hope to continue to advocate for the rights of pre-born children all across the country and find new people that are willing to roll up their sleeves and help to do the work.

Aschieris: Well, Rev. Nelson, thank you so much for joining the podcast today. It was such an honor to have you on, and we so appreciate your insight, and we’d love to have you back on in the future. Thank you.

Nelson: Thank you so much. It’s been a great opportunity for me. Bless you. Have a great day.

Chinese spy balloon ‘detrimental’ to planned US visit, says Blinken
FedEx is laying off 10% of its officers and directors amid cooling demand
The Threat of Woke Corporations and the Response of the Red States
Alzheimer’s Association ends brief partnership with pro-assisted-suicide group: ‘We deeply regret our mistake’
Starbucks misses expectations as China Covid surge hurts international sales