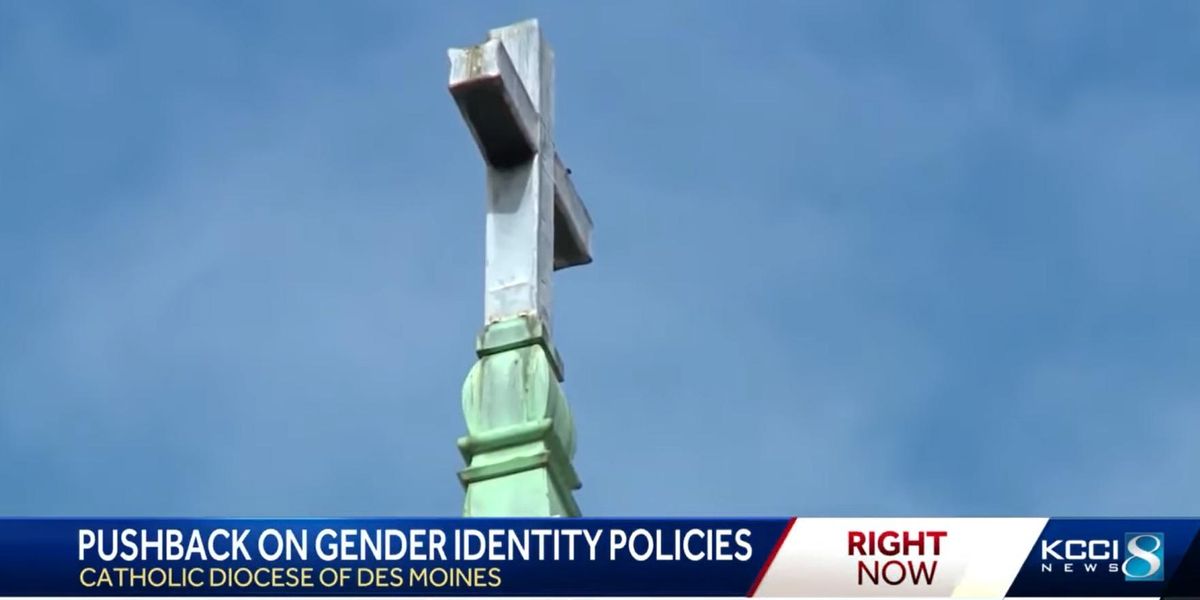 The diocese’s “Gender Identity Guide and Policies” document sets out seven policies, all binding for diocesan parishes, schools, organizations, and other institutions of the Catholic Church in the Diocese of Des Moines. They do not apply, however, to passersby, occasional vendors, and others who “may be on church-related premises who are not acting in an official capacity.”

The rules are as follows:

The Diocese of Des Moines made clear that those who disagree with these practices can leave: “We acknowledge their freedom of conscience to withdraw or absent themselves from situations they find objectionable. Concomitantly, they must likewise respect the Church’s mission to witness to truths accessible to reason and faith if they are to fully participate in our faith communities, including our Catholic schools.”

The diocese told KCCI that these policies are “part of a lengthy process … to address questions that have come forth by leaders in [their] parishes and schools.”

While the rules stand in the face of LGBT conventions and social constructivist illogic, the diocese’s policy document makes clear that it “fervently hopes that all persons experiencing gender dysphoria know what the Catholic Church tirelessly affirms, that they are unconditionally loved by Jesus Christ and by the Church, and that they are vital members of the Body of Christ who have a home in the family of God.”

The church may love them unconditionally, but it evidently can do without their made-up pronouns and leftist customs.

The new guidelines underscore how “any response that merely ratifies and reinforces the perceived disconnect between biological sex and gender-affiliation is not genuine compassion.”

Instead of mutilating or conferring puberty blockers to children afflicted with gender dysphoria, parents are instructed to “genuinely assist the child by acknowledging the suffering involved and to accompany him or her along the path to personal healing, self-acceptance, integration, and peace.”

“Integration” entails understanding that the “human person is a body-soul union, and the body—as created male or female—is an essential aspect of the human person. There is a complex reality tied to the sex of a person involving the physical (i.e., in the gonads and other evident characteristics), psychological, and social constituents. A healthy person is one in whom these dimensions are integrated.”

The diocese and the Catholic Church reject LGBT activists’ proposed alternative to integration.

“The Catholic Church teaches that the disruption of normal sexual development, or more dramatically, the removal or destruction of healthy sexual and reproductive organs, is a type of ‘mutilation’ that is medically and morally harmful,” the document states. “Procedures, surgeries, and therapies designed to assist a person in ‘transitioning’ his or her gender are morally prohibited.”

The document references Scripture as justification for this and other claims, but also Pope Francis’ indication that “biological sex and the socio-cultural role of sex (gender) can be distinguished but not separated.”

Democratic state Senator Claire Celsi expressed her outrage that the Catholic Church in Iowa would stand by its values.

Celsi tweeted, “Diocese of Des Moines codifies ostracism of transgender kids. These schools want public dollars and want to treat kids in a way that might cause them to commit suicide. This is not what Jesus would do.”

The Democrat state senator suggested that the purpose of the new policies was to “implicitly exclude LGBTQ students and staff.”

Celsi has a track record of ridiculing the church and suggesting that Catholics whose politics she finds disagreeable are un-Christian.

Celsi recently suggested that Texas Gov. Greg Abbott’s busing of illegal aliens to sanctuary cities puts his faith in doubt. She also lambasted a Catholic school for asking a teacher to remove an LGBT activist flag from a classroom.

The Daily Mail reported that the leftist Interfaith Alliance of Iowa slammed the diocese’s policies as “dangerous,” claiming they advanced “bigotry” towards transsexuals in the state.

Keenan Crow, director of policy and advocacy for the LGBT activist group One Iowa, suggested that the diocese’s policies sound “like conversion therapy,” despite the rules preventing children from undergoing transsexual conversion therapy on diocesan property.

Courtney Reyes, also an activist at One Iowa, said, “You cannot pretend to be compassionate while mis-gendering people and denying them access to any and all spaces under your control.”