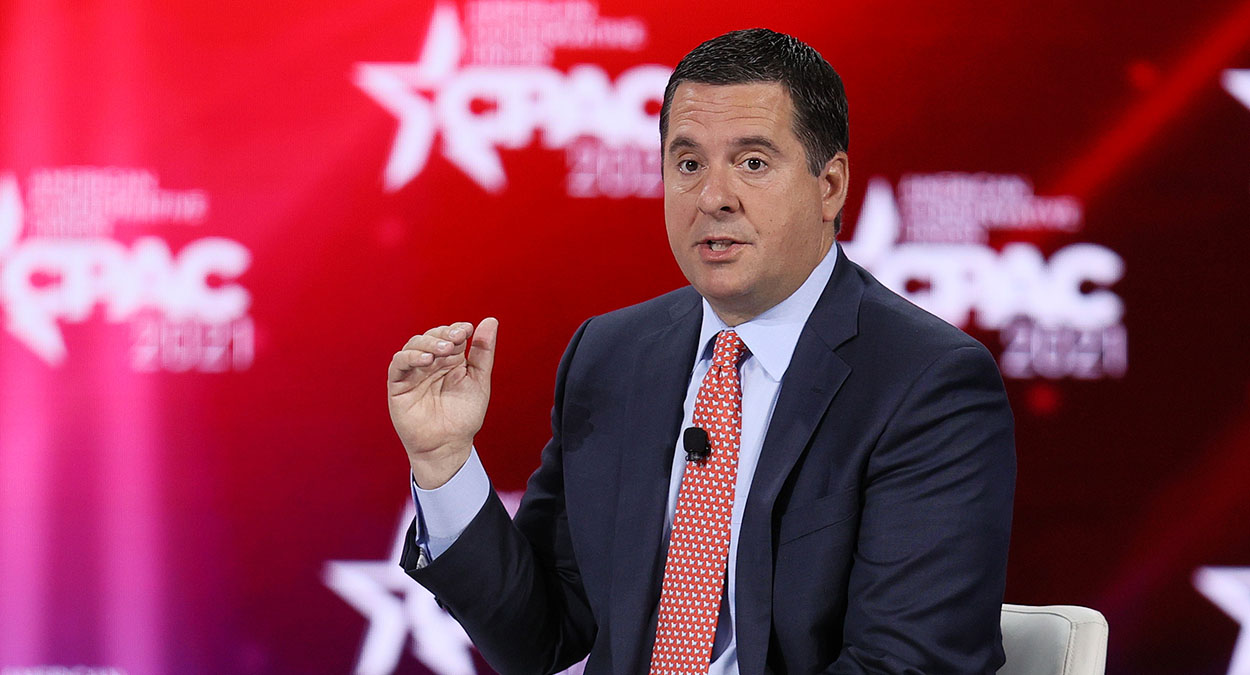 In January 2018, Democrats and left-leaning media outlets tried to delegitimize a key House Republican’s investigation of the FBI’s Russiagate probe by claiming that Russia supported it, and Twitter failed to set the record straight even though the social media giant’s staff knew there was no evidence behind claims of Russian involvement.

Reporter Matt Taibbi gives readers a glimpse behind the scenes at Twitter in the latest installment of the “Twitter Files,” a series of reports on internal operations based on information that new Twitter CEO Elon Musk released to select reporters.

“Even Big Tech’s leftist censors and speech enforcers privately ridiculed those who were spreading the Russia collusion hoax,” Nunes, now CEO of the Trump Media & Technology Group, told The Daily Signal in a written statement Thursday. “Yet the Democrats and the entire mainstream media adhered to the collusion narrative like an article of faith—and they still do today. It’s a kind of collective psychosis that’s impervious to reason, evidence, and common sense.”

Among other things, the FBI relied on information in the infamous and discredited “Steele Dossier” to obtain a warrant to spy on the Trump campaign even though that file contained unconfirmed and sometimes salacious material about Trump compiled by a former British intelligence officer. Justice Department Inspector General Michael Horowitz largely would verify Nunes’ claims about the FBI in his December 2019 report.

Even though Twitter staff wrote privately that there was no evidence supporting the assertion, left-leaning media outlets and Democrats trumpeted the narrative that interest in Nunes’ January 2018 memo—a campaign with the hashtag #ReleaseTheMemo—grew because of the support of Russian “bot” accounts on Twitter.

Twitter declined to publicly refute the assertion and Democrats pushed the narrative, with one apparently doing so after the Big Tech company had said it wasn’t true.

Feinstein and Schiff sent a letter to Twitter and Facebook requesting “an in-depth forensic examination” of alleged actions “by Russian bots and trolls surrounding the #ReleaseTheMemo online campaign.” The two lawmakers cited the German Marshall Fund’s Alliance for Securing Democracy, which claimed that the hashtag “gained the instant attention and assistance of social media accounts linked to Russian influence operations.”

Alliance for Securing Democracy’s claim traced back to the Hamilton 68 dashboard, which former FBI counterintelligence official Clint Watts developed, Taibbi writes in his “Twitter Files” report. Twitter executives pushed back on the narrative, stating that they did not find any evidence of Russian involvement.

“I encourage you to be skeptical of Hamilton 68’s take on this, which as far as I can tell is the only source for these stories,” Twitter’s global policy communications chief Emily Horne wrote in an email dated Jan. 23, 2018. (Horne went on to work as a spokesperson for President Joe Biden’s National Security Council.)

In the email, Horne explained the reasons for skepticism:

1) Hamilton 68 does not release the accounts that make up their dashboard, so no one can verify the accounts they include are in fact Russian automated accounts, and 2) it is extraordinarily difficult for outside researchers, who do not have access to our full API and internal account signals, to say with any degree of certainty that an account they believe is behaving suspiciously is 1) automated and 2) Russian.

Horne referred to the story as “a comms play for ASD,” referring to Alliance for Securing Democracy.

Carlos Monje, then Twitter’s vice president for policy, suggested pushing back on the claims, writing: “If ASD isnt [sic] going to fact check with us, we should feel free to correct the record on their work.”

Yoel Roth, then Twitter’s head of trust and safety, suggested going public with a response debunking the claim.

“Given all the swirl around #releasethememo is based on Hamilton, which is based on raw tweet count, we’d be able to broadly refute it without actually sharing anything too sensitive,” Roth wrote on Jan. 24, 2018. “I think we can push back strongly on the Russian component here. I just reviewed the accounts that posted the first 50 tweets with #releasethememo, and while a few of them definitely look spammy, none of them have any signs of being tied to Russia.”

After Feinstein released the memo, one of her staffers told Twitter’s Monje that “it would be helpful to know” how Hamilton 68 decides that a Twitter account is Russian.

On Jan. 23, 2018, Monje wrote that a staffer for Sen. Richard Blumenthal, D-Conn., called him, wanting to send a follow-up letter demanding more Twitter action on the #ReleaseTheMemo hashtag.

“I tried to wave him off of this particular storyline because we don’t believe these are bots,” Monje wrote.

Lauren Culbertson Grieco, who is still at Twitter as head of government affairs for the U.S. and Canada, according to her LinkedIn account, also weighed in.

Grieco suggested that “it might be worth nudging Blumenthal’s staffer that since we have been monitoring this from the get-go and have little reason to believe its [sic] a big Russian propaganda movement, that it could be in his boss’ best interest to not go out there on this because it could come back to make him look silly.”

Another staffer suggested that Twitter should negotiate with the senator, offering something to the Connecticut Democrat in the future. The staffer—whose identity has been redacted—wrote that “it seems like there are other wins we can offer him.”

Monje wrote that he spoke with Blumenthal’s staffer.

“I said that Twitter spent a lot of resources to respond to the initial request and the reward from Blumenthal shouldn’t be another round of requests,” Monje wrote. “It also doesnt [sic] do anything to fix the problem.”

Monje concluded that “Blumenthal isnt [sic] always looking for real and nuanced solutions. He wants to get credit for pushing us further.”

Twitter staffers went on to compare lawmakers’ Russia-related requests in 2018 to the children’s book “If You Give a Mouse a Cookie,” a hilarious tale in which the mouse makes ever more exhausting requests after he receives a cookie.

But while Twitter staff pushed back on the Russia narrative privately, they did not challenge it publicly.

Outside counsel from the New York-based law firm Debevoise & Plimpton encouraged Twitter to issue vague statements such as “we take seriously any activity that may represent an abuse of our platform.”

As a result, left-leaning media outlets continued to parrot the claim. The New York Times even reported that Russian bots promoted the hashtag #SchumerShutdown.

Yet Twitter staff wrote to the media on “deep background” that both hashtags, #ReleaseTheMemo and #SchumerShutdown, “appear to be organically trending.”

The offices of Feinstein, Schiff, and Blumenthal did not respond to The Daily Signal’s requests for comment.

The Alliance for Securing Democracy pointed The Daily Signal to a Jan. 24, 2018, BuzzFeed report in which Bret Schafer, a spokesperson for Hamilton 68, said that while “Kremlin-oriented accounts” were “heavily engaged” in promoting #ReleaseTheMemo, they still represented a minority of accounts tweeting with that hashtag.

“On Friday, #releasethememo was trending at a level we haven’t seen with any hashtag since we launched Hamilton” in August, Schafer said. “That said, it’s important to put everything on the dashboard in context. Yes, Kremlin-oriented accounts were heavily engaged, but they likely represented a very, very small percentage of the overall engagement with the hashtag.”

In comments to Taibbi, Nunes wrote that “Schiff and the Democrats falsely claimed Russians were behind the Release the Memo hashtag [and] all my investigative work … By spreading the Russia collusion hoax, they instigated one of the greatest outbreaks of mass delusion in U.S. history.”

The “Twitter Files,” Musk’s public campaign to expose internal documents from the social media company’s previous regime, also has revealed that the FBI paid Twitter $3 million as the intelligence community urged suppression of the New York Post’s October 2020 reporting on the contents of Hunter Biden’s abandoned laptop; that Twitter didn’t have a good explanation for censoring the Post’s story in the weeks before the presidential election; and that Twitter stifled medical debate during the COVID-19 pandemic, among other revelations.