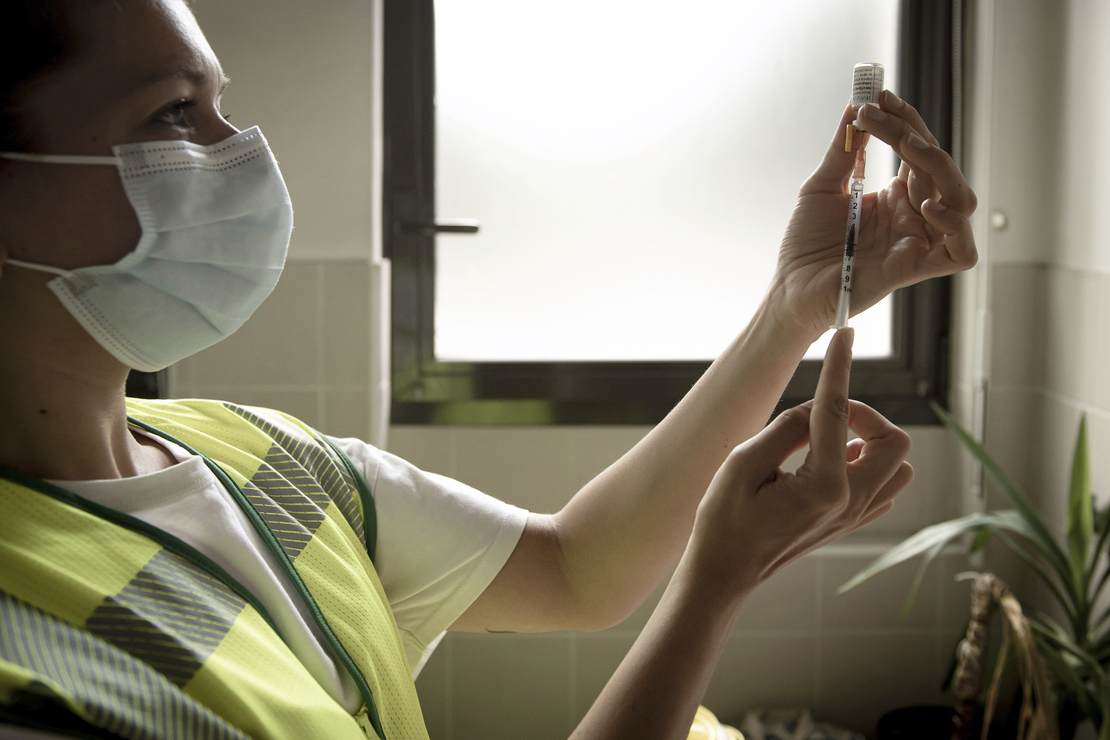 In a previous article for PJ Media, I distinguished between three categories of consensus liars: those who, whether innocently or ignorantly, actually believe that certain lies are true and will not be dissuaded from their certitude; those with a tremor of insecurity who must believe in a given lie because not to do so would create a state of intolerable anxiety; and those who cannot live without intentionally lying since the lie is their bread and butter.

When it comes to the COVID-19 pandemic and especially to the ongoing controversy regarding the nature of the mRNA vaccines and the escalating booster shots, it is the second category of anxiety-prone and over-invested believers whom I am most concerned about.

These are people — and I have known many — who must resist acknowledging the latest reports pertaining to the harmful and often lethal effects of the vaccines they have willingly, or forcibly, taken. For they would have to admit that they may now be carrying in their cells and tissues what amounts to a ticking time bomb that could conceivably detonate at some unspecified moment, perhaps tomorrow, perhaps in two years or more. No valid longitudinal or comprehensive study has been completed.

A broad array of negative effects is now in play, ranging from infertility to miscarriage to vaccine-induced myocarditis (an inflammation of the heart muscle), circulatory issues, bacterial meningitis, neurological disorders, blood clots, strokes, and death. Hopefully, many possess the vigor and energy, and underlying good health to resist or degrade contamination, but it would be folly to dismiss the menace. A cytokine storm or creeping disability is a genuine danger.

As reported in The Exposé, the U.K. government’s Office for National Statistics (ONS) reveals that “mortality rates are highest among the vaccinated in every age group.” The Exposé concludes that “the data shows that excess deaths have increased significantly in the ‘Five Eyes’ and Europe since the rollout of the Covid-19 vaccine. This includes a dramatic increase in excess deaths among children and young adults in the US and a widening gap in mortality rates between the vaccinated and unvaccinated populations in England.”

Edward Dowd’s recent “Cause Unknown”: The Epidemic of Sudden Deaths in 2021 and 2022 is a thoroughgoing analytic compendium of the devastation Big Pharma, the medical consortium, and the Administrative State have unleashed among the larger population. Despite the predictable disclaimers by those vociferously touting and defending the standard pro-vaccine chronicle, Dowd’s results are confirmed and supplemented by such major studies as Robert F. Kennedy Jr.’s The Real Anthony Fauci, Joseph Mercola and Ronnie Cummins’ The Truth About COVID-19, Colleen Huber’s Neither Safe Nor Effective, Sucharit Bhakdi’s Corona False Alarm?, Steven Mosher’s Pandemics, Mary Holland’s (edited volume) Turtles All The Way Down, Peter and Ginger Breggin’s COVID-19 And The Global Predators, and Douglas Axe et al. The Price of Panic—all indispensable volumes by reliable and good-faith researchers worth consulting by any serious reader. The signatories of the Great Barrington Declaration should also be credited, as did Gov. Ron DeSantis in Florida, with beneficial results.

Vaccine hesitancy and booster skepticism are now a growing phenomenon. A recent Rasmussen poll indicates that 49% of Americans believe that the vaccines may be responsible for the surge in unexplained deaths — acronymed as SADS (Sudden Adult Death Syndrome). Alarmingly, it is now apparent that casualties among healthy young athletes are through the roof, owing primarily to myocarditis. Cardiologist Peter McCullough points out that “pre-COVID, myocarditis ran about 4 cases per million. Post-vaccine, Myocarditis is now running at 25,000 per million and rising.”

The plot thickens. According to Dr. Syed Haider, an internal medicine specialist, the latest surge of a new strain of COVID-19 spreading throughout China may pose a serious risk to immunologically suppressed Americans. “What’s going on in most countries like the United States,” he explains, “is that people who got vaccinated are now suffering from suppressed immune systems and getting weaker with each booster, making them more prone to catching and spreading the virus.” Noting how studies are now showing drops in immune function with every shot, “the vaccinations,” he continues, “are what drove the evolution of the virus, along with diminishing immunity in those who are vaccinated, leading to higher viral loads and different variants.”

Similarly, The Epoch Times reports that Belgian virologist and vaccine expert Geert Vanden Bossche “predicted that SARS-CoV-2 would evolve into things far more dangerous. ‘I SERIOUSLY expect that a series of new highly virulent and highly infectious SARS-CoV-2 (SC-2) variants will now rapidly and independently emerge in highly vaccinated countries all over the world and that they will soon spread at high pace.’”

The only antidote, not to the original virus or its strains but to the now more problematic vaccines, would entail, in Vanden Bossche’s estimation, “a large-scale antiviral prophylaxis campaign in highly vaccinated countries”; otherwise, “there shall be no doubt that the pandemic will end by taking a huge toll on human lives.” Like nearly all our best infectious disease epidemiologists and public health scientists dismissed as schismatics, Vanden Bossche has been mocked and debunked by the general run of so-called “fact-checkers” and pro-narrative physicians, but it is becoming increasingly clear that the morbid joke is on them.

There is, of course, a pandemic of propaganda and misinformation that has been let loose upon an unsuspecting world. Merely scroll down the myriad entries on the internet orchestrated by morally compromised monopolistic “providers” like Google, YouTube, and Facebook — and one will be hard put to isolate dissenting voices. Censorship and downranking are critical reasons that the global COVID/vaccine scam has been so effective, but vital information can, with patience and diligence, still be found.

Common sense should also dispose us to ask why significant objectors to the official narrative would risk career and livelihood to inform the populace that an enormous hoax has been perpetrated on a fearful and complicit public. It is certainly not to their advantage to sound the alarm, whereas those on board with the prevailing narrative are doing very well for themselves. The dissidents should be taken at their word.

One thinks of outstanding specialists in their fields like Doctors Robert Malone, Peter McCullough, Paul Elias Alexander, Ryan Cole, Paul Marik, Vernon Coleman, Pierre Kory, and others who have come under fire from the syndicate of quislings and cabalists for warning about the adverse effects caused by the vaccines. In my own country, physicians and virologists like Doctors Charles Douglas Hoffe, Stephen Malthouse, Francis Christian, Byram Bridle, Chris Shoemaker, and Roger Hodkinson have all been targeted by the parasitic class of doctors, journalists, academics and politicians. Yet these whistleblowers are precisely the authorities who should be gratefully commended and attended to.

Fortunately, the truth is slowly coming out. Unfortunately, the incurious believers, my category 1, will persist in accommodating the lie. They are probably a lost cause. The profiteering liars of category 3 will redouble their efforts to pretend that what is really a power game and money-making swindle is a health issue. It is now pretty well obvious that pandemic mandates and the ensuing “pandemonium” were never about public health but status, control, and revenue. Ideological motives associated with the Great Reset, a repackaging of totalitarian politics in the service of an oligarchic elite, are no doubt also in play. Moreover, there is no evidence that many of these implicated people have actually been injected. It is interesting to note, for example, that although all federal employees must be vaccinated, Congress gets a bye, nor does mandatory disclosure apply.

As for the inhabitants of the second category who do their utmost to suppress intimations of doubt and insecurity, they may yet come to terms with their anxieties and avail themselves of antidotal remedies to vaccine poisoning. The time bomb can be defused by available alexipharmics if those who realize they are exposed to unintended consequences are willing to take the necessary steps. Additionally, the FLCCC alliance (Front Line COVID-19 Critical Care) has developed effective protocols to attenuate or relieve the debilitating symptoms of the vaccines.

This is the situation we now confront. Dr. Aaron Kheriaty points out in his recent book The New Abnormal: The Rise of the Biomedical Security State that the professional acknowledgment of natural immunity in the American population and the distribution of repurposed drugs when the pandemic was first introduced would have cut pharmaceutical profits in half; today, by 90%. And the tragedy of suffering, fear, and apprehension that has afflicted untold millions of people would have been equally mitigated or might never have happened. Despite the blizzard of Internet sites and medical publications assuring the public that COVID mandates and coercive policies are benign and alleviative, masking, social distancing, lockdowns, and poorly tested mRNA vaccines were never of much or any therapeutic value—and, indeed, were massively injurious to physical health, psychological stability, social cohesion, child development, and economic prosperity.

Today we are dealing with the aftermath: economic depression, social divisions, failing infrastructure, political despotism, medical apartheid, “excess deaths” (additional mortality above the expected level, due especially to the lockdowns and the vaccine rollout), and, profoundly worrisome, future health consequences of unknown severity pertaining to the vaccines. At the very least, the hope is that most people are strong enough to fight the vaccines that are circulating in their systems. But there is no harm and likely much benefit in considering preventive measures. Meanwhile, vaccine skeptics who know they have been handed a bill of goods should not allow themselves to be suborned or threatened. They are being proven right with every passing day.