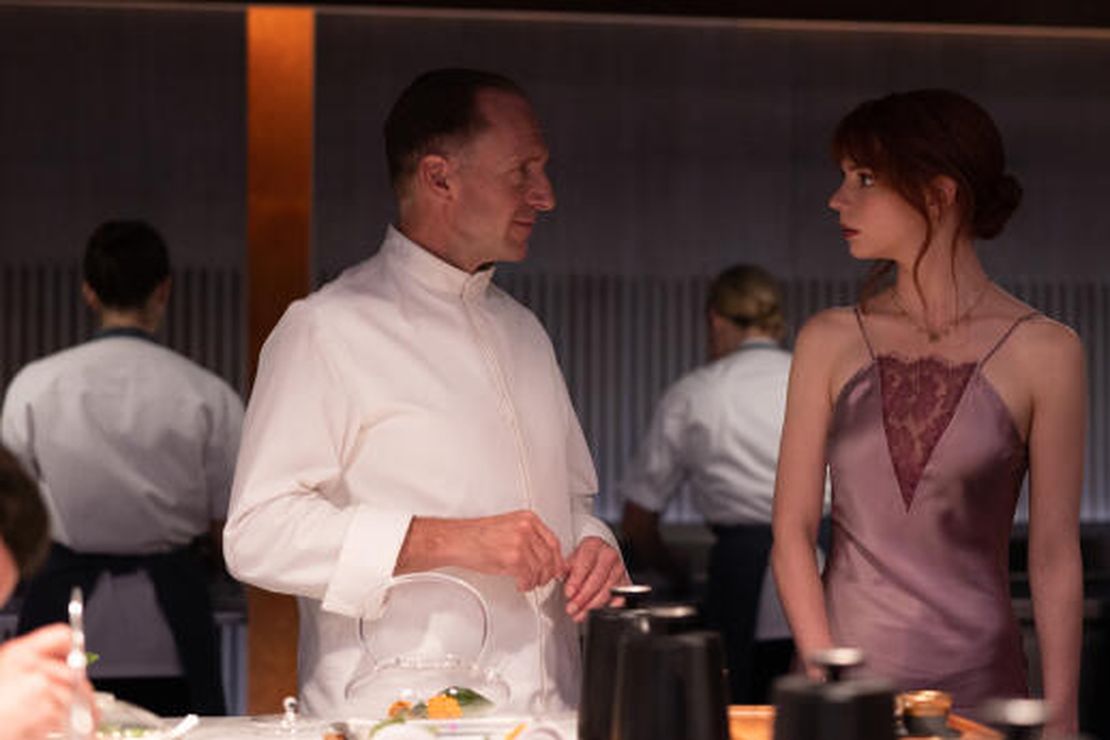 Just made available on streaming, The Menu is one of those tastiest of treats: a smart movie that might be almost as smart as it thinks it is. I needed a palate cleanser after watching that big, stupid mess called Glass Onion: A Knives Out Mystery, and the staff at the fictional Hawthorn restaurant served up that and more.

The Menu is a pointedly satiric love-hate letter to fine dining, and my fellow foodies will want to see it. So will must most anyone who enjoys a well-written, smartly-acted, and gorgeously shot satirical horror-thriller.

There will be minor spoilers in this review, including the fact that there is a substantial body count. Although if you’re a foodie, don’t worry about spoilers. Just stop right here and go watch the movie — then come back and we can talk in the comments.

Seriously, I love how this movie was shot. The camera moves around the small, crowded set like an expert waiter — always exactly where it needs to be and never missing a detail.

Our fictional celebrity chef, Julian Slowik (Ralph Fiennes, brilliant as usual), is every bit as skilled, domineering, and ruthless as you expect a Michelin-starred chef to be — and then some. The staff (led by Hong Chau as Elsa) is hardworking, efficient, and eerily cultish. They work together with military precision and even live together on the island in a Quonset hut barrack.

Slowik’s restaurant seats just 12 patrons each night, who pay a prix fixe of $1,250 each, and who must journey by boat to the small island where Hawthorn is located.

On this one night, the guests have been chosen very carefully, and for one good reason: They’re all awful.

There’s the young foodie, Tyler (Nicholas Hoult), who knows the chef’s menu better than the chef himself and won’t shut up about it. (“Bergamot?” Tyler asks about the chef’s specially blended tea. “Bergamot,” Slowik answers, exhaustion and irritation evident on his face.)

There’s the wealthy, older couple (Reed Birney and Judith Light). They’re regulars at Hawthorn because it’s expensive and therefore expected of them. They derive no pleasure from Slowik’s magnificent creations.

There’s a trio of Silicon Valley tech bros, there for bragging rights and showing off the corporate Amex Black card.

There’s the washed-up movie star (John Leguizamo) moving into the “hosting phase” of his career, at Hawthorn with his cynically ambitious personal assistant (Aimee Carrero) to earn foodie cred and a gig at Food Network.

The best pairing might be the big-name food critic (Janet McTeer) and her pathetically obsequious hanger-on (Paul Adelstein). Anyone who’s watched enough Top Chef or Food Network shows will know the types — and laugh.

But The Menu doesn’t just poke fun at the industry’s worst customers, who are also likely to be fans of the film. It also does its best to deflate the pretensions of the highest-scale restaurant industry.

“Tonight, you get no bread,” says Chef Slowik before serving a bread course bereft of bread, as things start to go off-kilter for the guests.

Instead, patrons are given an arrangement of dips and toppings and a little wooden tool to slurp them up with. It’s all on a plate big enough for a generous serving of bread, conspicuous by its absence. Steve Martin used a similar gag in his brilliant 1991 comedy, L.A. Story, but The Menu’s updated version rings truer as television has given super-upscale dining much more visibility.

Now to the plot, thick as grandmother’s roux.

Not to give too much away, but Slowik and his entire staff — including a few thugs to keep anyone from leaving — are in on a murder-suicide plot involving all 12 guests.

“You represent the ruin of my art and my life,” Slowik explains in his inevitable soliloquy. “And now you get to be a part of it. Part of what I hope is my… masterpiece.”

The movie has very little gore, however.

It’s satire, yes, but The Menu never winks at the audience or descends into buffoonery. Instead, we’re treated to sharp exchanges like this one as the guests learn their fates:

The Menu goes more and more over-the-top as Hawthorn’s staff and guests proceed through the menu.

The monkey in the wrench, to borrow John McClain’s malapropism, is that Tyler’s date, approved along with the other guests by Slowik himself, bowed out. The young foodie has brought along another woman, Margot (Anya Taylor-Joy), in her place.

This causes some tension between Slowik and Margot, who would not only rather not die, but is the only one willing to stand up to the tyrannical celebrity with all the knives.

“Who are you?” Slowik demands. “I need to know if you’re with us or with them.” But either way, Margot has unintentionally become a part of Slowik’s plot.

The script doesn’t have Margot there unintentionally, however. She represents people who would never put up with a celebrity chef dictating not just our food choices but our personal likes and dislikes. She won’t just sit there and accept whatever the chef dishes out.

“Wait. You like this?” Margot asks Tyler about the bread-less bread course. “He’s basically insulting you.”

But Tyler and the food critic lap up the abuse, literally, with their little wooden tools. Slowik has come to resent, murderously, the foodies-turned-toadies who made him rich and famous.

Margot, for a reason I won’t spoil here, is in a position to recognize an essential truth about Slowik: “Come on, Chef. I thought tonight was a night of hard home truths. This is one of them. You cook with obsession, not love.”

The symmetry between what Margot is and what Slowik has become is such a great reveal.

It’s also smart writing, but screenwriters Seth Reiss and Will Tracy trust the audience to be bright enough to come to the revelation ourselves. It’s a real joy to be treated as an intelligent viewer for a change, instead of being hit over the head with a virtual frying pan at each plot point and character reveal.

Like a pricy prix fixe night out, The Menu might not be for everyone. But it’s such a welcome break from generic superhero movies that try to appeal to everybody and art house films that purposely appeal to nobody that I hope it finds a wider audience than horror-satire flicks usually do.

But, please — no sequels. After a meal that rich, there’s no room — or need — for dessert.

The Menu is available on HBO Max.