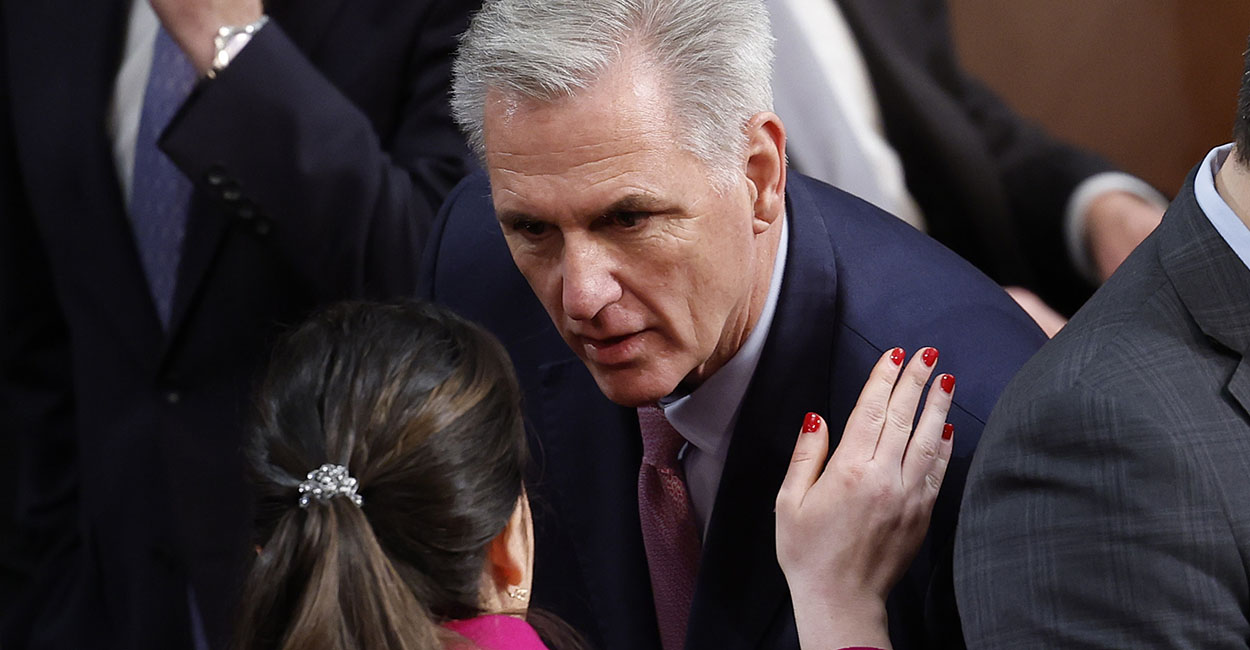 There’s a lot of alarmism going on right now about the race for speaker of the House. Many are calling it a crisis or a “three-ring circus.” What it is really is the first sign that the reckoning and subsequent healing needed among Republicans may finally be upon us.

The other wing of the Republican Party—some call themselves populists, some reformists, some national conservatives or “natcons”—sees a country slipping away. They want real reforms. They see the establishment as too tied to corporate America. They see corporate America as too tied to international interests, especially China, and not focused enough on the lives and well-being of everyday Americans.

This is a debate worth having. It’s a debate that’s been kicked under the rug for too long. It’s not chaos; it’s democracy.

Rep. Kevin McCarthy, R-Calif., is a well-liked guy among Republicans. He’s not known as a policy leader. He’s particularly well-connected to the corporate influence world that dominates Washington today. The congressional Republicans opposing McCarthy are opposed to this camp.

They are also unhappy that Republican leaders allowed a bloated, wasteful, $1.7 trillion spending bill that was chock-full of bad policy to pass. They want to get back to fiscal discipline, a former bedrock Republican principle that has been lost in recent years.

The press would like to make this into a MAGA/Trump revolt against the establishment, but that’s not accurate. Some of the most MAGA members are lined up with McCarthy, as is former President Donald Trump himself. What we are seeing today is instead a push by back-bench members to return to conservative principles, regular order, and debate in Congress.

The problem identified by the conservative upstarts is that the bills coming out of Congress overlap very little with the priorities of most conservative voters. Besides the overall spending issues and the coming fiscal catastrophe that most Republicans want to pretend is not on the horizon, the recently passed spending bill will actually make the border crisis even worse.

Reasonable people understand that some compromise is necessary with a divided government, but the spending bill did a lot for every entrenched Washington interest and did nothing for average American voters concerned about vitally important issues such as border security and fiscal discipline.

Under the current system, there is no mechanism for members of Congress to effectively raise these issues. Republicans following corporate America’s agenda cut deals with Democrats who have a similar worldview. Each side gets their top priorities covered.

Beyond that, amendments are not allowed. There is no real debate on issues. There can’t be, because besides those in on the negotiations, nobody even knows what’s in the bills. The rules requiring time to read the bills are waived virtually every time there’s a big bill in question. Thousands of pages pop out after secret negotiations between leadership. The vote is then held within hours.

This is a broken system. There’s nothing radical about trying to reform it.

The furor over this speaker’s race has been intense. Rep. Dan Crenshaw, R-Texas, called those opposing McCarthy “terrorists.” Others likened them to the Taliban or called them grifters. The honest truth is those holding up the works are a diverse bunch.

There are a few grifters and rabble-rousers thrown in. There are some Republicans who have shown a lot more skill at social media posturing than they have at governing. Some have also bought into whacky conspiracies. None of this means they are wrong on this specific matter.

More importantly, aside from some of the most eccentric, there are also serious members of Congress involved in the speaker’s challenge. These members see their country in decline. They see regular Americans’ interests fall to corporate interests. They see a lack of leadership among Republicans to address the country’s real problems in a remotely serious way.

They are looking for leverage to force a debate on these matters and to force procedural changes that would allow for more substantive and robust policy debate going forward. This is what democracy is all about.

Neither America nor the Republican Party is going to fall apart if there’s no speaker of the House for a few days. The country will fall apart if more bills like the $1.7 trillion mess that was just passed with no debate keep coming.

The corporate media narrative that this speaker vote has been dangerous and chaotic is, as is so often the case, the opposite of true.

When the status quo is failing, sometimes you need a little bit of chaos to shake things up. The system certainly needs a shake. What’s happening on Capitol Hill is healthy. It’s long overdue.

Marjorie Taylor Greene got threatening voicemails from man who spelled his full name, left his phone number, and dared her to press charges. His wish was apparently her command.
It’s About Time: Bring on the Tanks!
The Real Reason Biden Shot Down the Chinese Spy Balloon
‘He wants world dominance’: Pompeo reveals who he thinks is more dangerous than Putin
NewsBusters Podcast: CNN Ratings Crash Matches Doubling Down on Bias