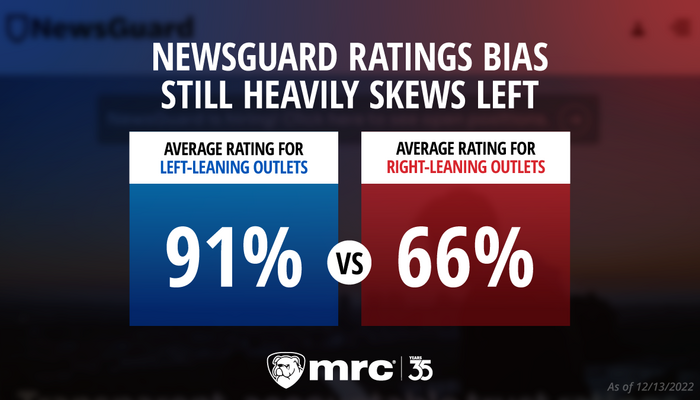 Discredited leftist website ratings firm NewsGuard has had a year to prove that its ratings system isn’t prejudiced against conservative media, but it’s failing miserably. A new analysis shows that liberal media outlets were rated 25 points higher on average than right-leaning media outlets illustrates how NewsGuard’s self-projection as a credibility gatekeeper is a complete joke. 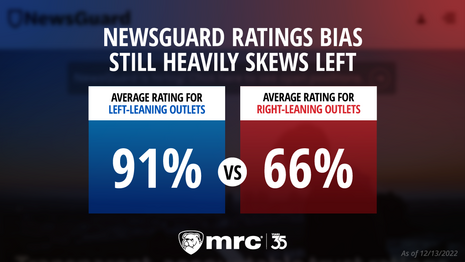 MRC Free Speech America analyzed the NewsGuard ratings of media outlets based on a list compiled by AllSides that classified their “bias” on a left-to-right scale. The average NewsGuard score for the “left” and “lean left” outlets — which included leftist outlets like USA Today — was a “green shield” rating of 91/100. USA Today was embroiled in a scandal after former reporter Gabriela Miranda was found to have fabricated sources. While the average rating for “right” and “lean right” outlets — which included Fox News, The Daily Wire and New York Post — was a low 66/100.

This study was published just over one year after MRC Free Speech America released its first comprehensive study analyzing NewsGuard’s bias on Dec. 13, 2021, which showed a 93/100 to 66/100 disparity in favor of “left” and “lean left” media outlets over “right” and “lean right” media outlets.

NewsGuard’s bias has barely budged in over 365 days of ever-changing nutrition labels either praising or demonizing the “credibility” of news outlets. But NewsGuard as an organization is in no place to virtue-signal about “credibility” given that its CEO Steven Brill tried to cast the now-verified Hunter Biden laptop scandal as a Russian “hoax” just prior to the 2020 presidential election. Even after the emails from the laptop were verified, NewsGuard maintained perfect scores for outlets like Politico, The Washington Post and USA Today, which all interfered in the 2020 election by trying to bury the Biden family scandal as some kind of disinformation operation.

Outlets like The New York Times and The Washington Post have proceeded to cite NewsGuard as a neutral journalism referee, perhaps because of the glowing treatment they get from the firm. Both The Washington Post and The New York Times received 100/100 scores from NewsGuard. The Washington Post was recently caught stealth-editing a report that falsely labeled journalists Matt Taibbi and Bari Weiss as “conservative.” The erroneous characterization came after both reporters’ separate  coverage exposing the internal communications behind Twitter’s massive campaign to censor speech and ban former President Donald Trump. The Times recently acted as a public relations firm for communist China during the COVID-19 pandemic. One grotesque example of glorifying China’s draconian zero-COVID-19 controls appeared in the paper in February 2021: “Power, Patriotism and 1.4 Billion People: How China Beat the Virus and Roared Back.” (NOTE: New York Times and The Washington Post were posted in the AllSides list and were included in MRC Free Speech America’s analysis.) 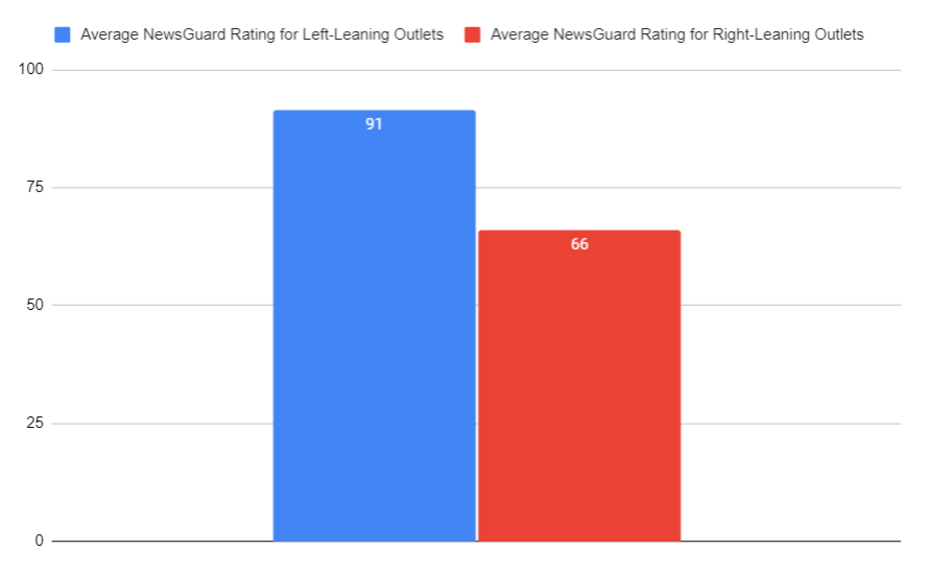 AllSides listed 31 total outlets as “left” or “lean left” and 23 outlets listed as “right” or “lean right.” AllSides included the opinion sections of news websites as separate entities. MRC Free Speech America excluded any outlet that was characterized as “opinion” to keep the focus on news organizations for the analysis. The much higher scores for outlets classified as “left” and “lean left” look ridiculous in light of the content that they’ve published and promoted. 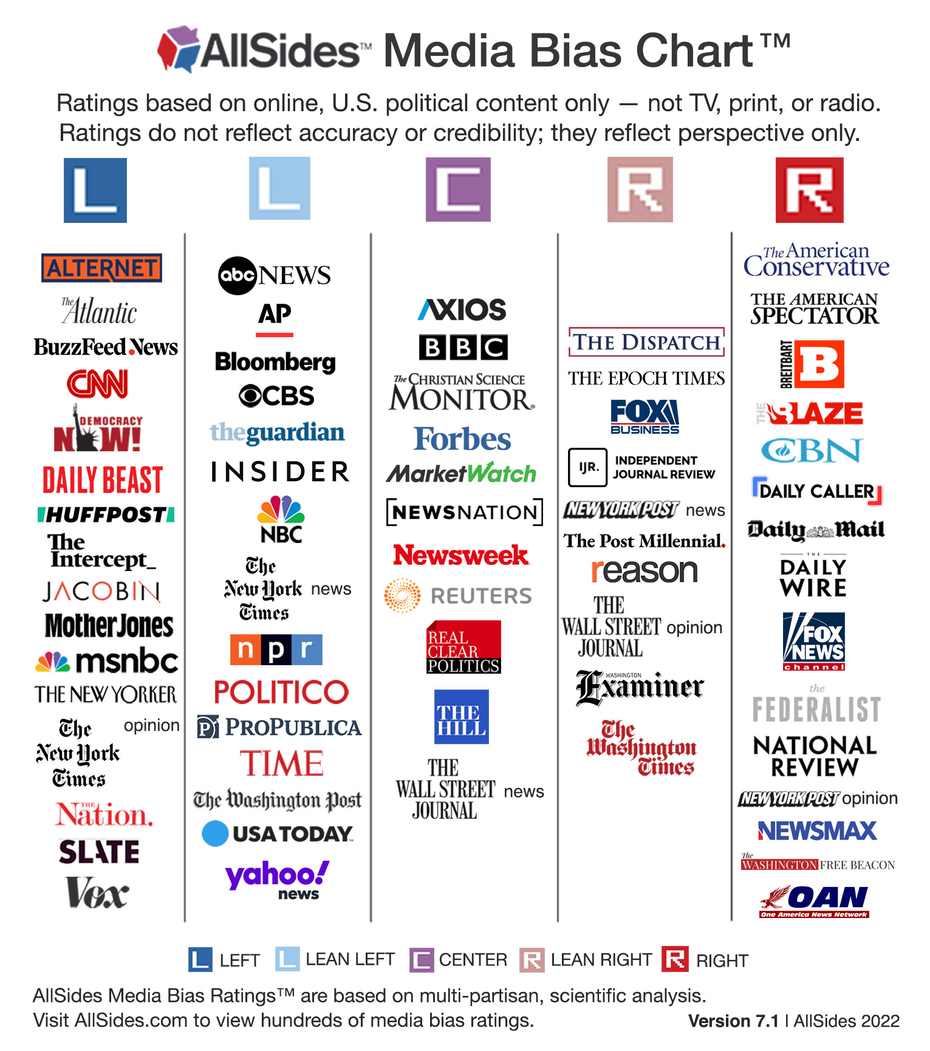 BuzzFeed News continues to host the bogus January 2017 Steele dossier it published that made erroneous claims about alleged collusion between Trump and Russia. However, NewsGuard still gives the outlet a perfect 100/100 score. In an email to the Media Research Center sent earlier this year, NewsGuard General Manager Matt Skibinski justified his company’s perfect “100/100” rating for BuzzFeed News by noting the five-year timespan since the dossier’s publication and the fact that the dossier article is one “single story.” That’s despite the fact that top government officials and Democrat lawmakers wielded the Steele dossier as part of a protracted political investigation that cost $25.2 million total in taxpayer dollars, according to Fox Business, and paralyzed the country for two years.

BuzzFeed “senior culture writer” Scaachi Koul wielded Scripture to wokescold Toobin’s critics: “Haven’t we all done something on a work call that, in normal circumstances, we’d never do during a meeting? Let he without sin cast the first stone.” An outlet like that deserves a perfect score, according to NewsGuard.

Despite a glaring journalistic scandal involving USA Today publishing multiple stories with fabricated sources, MRC Free Speech America exposed on June 24 how NewsGuard still maintained the publication’s perfect 100/100 rating. That score remains unchanged as of Dec. 13. USA Today’s fact-checking operation has also been shown to peddle fake news to protect left-wing politicians. In a so-called June 30, 2020, “fact-check”, the outlet tried deflecting from the historical fact that Democrats started the white supremacist Ku Klux Klan and were responsible for the Civil War by drawing a flimsy distinction between the Democratic Party and Democrats:

Historians agree that although factions of the Democratic Party did majorly contribute to the Civil War’s start and KKK’s founding, it is inaccurate to say the party is responsible for either.

The headline for the propagandistic fact-check was deceptive: “Fact check: Democratic Party did not found the KKK, did not start the Civil War.” The Democratic Party may not have officially started the Civil War, but the Confederacy was indisputably made up of strident Democrats, which USA Today arbitrarily glossed over to protect the left. In fact, one of the KKK’s founding members was Confederate veteran Nathaniel Bedford Forrest, a Democrat. But according to NewsGuard’s nutrition label, USA Today “[A]voids deceptive headlines” and “[g]athers and presents information responsibly.”

The bias gets even more extreme. Of all the “lean right” news outlets listed by AllSides, The Federalist scored the worst with a failing 12.5/100 score, the same score it held at the time of MRC Free Speech America’s first study. After a year, NewsGuard is still criticizing The Federalist’s questioning of the efficacy of masks for COVID-19, even though liberal CNBC (not on the AllSides list, but has a “95” NewsGuard rating) cited a study showing that cloth masks were only 37 percent effective at filtering out virus particles. Another August 2021 preprint study did not find an “association between mask mandates or use and reduced COVID-19 spread in US states.”

NewsGuard’s skewed ratings become even more outrageous in light of the outlets it considers more credible than The Federalist.

Communist China state propaganda outlet Global Times got a 39.5/100 NewsGuard rating, 27 points higher than The Federalist. Global Times scored a green checkmark for meeting the following NewsGuard criteria: “Does not repeatedly publish false content,” despite the fact that it is literally a state propaganda outlet. The Federalist supposedly failed that standard. It’s worth noting that Global Times is the outlet that threatened Australia with becoming “cannon fodder” if it were to support Taiwan. (NOTE: Global Times was not included in the AllSides list and was not tallied in MRC Free Speech America’s calculation.) [Emphasis added.]

NewsGuard apparently doesn’t appreciate it when its bias is exposed for the world to see.

NewsGuard — at the time of MRC Free Speech America’s first study exposing its blatant bias —  tried to accuse MRC of “cherry-pick[ing]” outlets even though the study used another organization’s list and despite MRC having no hand in compiling that list. The liberal Poynter Institute cited two media experts who shared “praise for the stated methods for rating bias” by AllSides. Poynter is the same institution that attempted to blacklist 29 conservative outlets in 2019 and is funded by prominent liberal billionaires, including George Soros and Pierre Omidyar.

After complaining that MRC “cherry-picked” sites to include in its 2021 study, Skibinski proceeded to cherry-pick sites in an attempt to prove NewsGuard wasn’t biased. He noted that his firm “rated many conservative-leaning websites as highly credible,” like The Daily Caller, which he touted “has a score of 92.5 out of 100.” However, our records show that NewsGuard had given The Daily Caller a low rating of “70” out of 100 when the study was published Dec. 13, 2021, not a “92.5” as Skibinski misleadingly claimed at the time. In fact, the score was only updated to “92.5” four days after the first study was released.

The Daily Caller’s score had since been updated to a perfect 100/100 score as of Dec. 14, 2022, but the low overall average score NewsGuard dolls out to conservative news organizations writ-large (66 percent) remained exactly the same as a year ago.

The results of MRC Free Speech America’s latest analysis are especially damning in light of NewsGuard’s latest expansion into rating TV shows. Variety reported Dec. 1 that NewsGuard’s ratings of “140 cable, streaming, and network television shows and networks will be available to advertising agencies, marketers, and others starting January 2, 2023.” NewsGuard’s TV show ratings are structured based on a 0-10 scale as opposed to the 0/100 scale used for websites. NewsGuard scored Fox News’s Tucker Carlson Tonight at rock bottom, giving the show a 0/10. NewsGuard claimed Carlson’s show “regularly advances false, misleading, and unsubstantiated claims on topics of importance such as COVID-19 and U.S. and international politics.”

By comparison, CNN’s Inside Politics received a NewsGuard rating of 9/10, because host John King supposedly provides “multiple viewpoints in his reports, mostly through his own summary of dissenting views on a story, and interviews with prominent Republican lawmakers, pollsters, and consultants.” But King is blatantly biased. For example, King and his panel recently used Trump’s dining with Ye (formerly known as “Kanye West”) and Ye’s guest, white supremacist Nick Fuentes, and the GOP’s quiet response to imply that Republicans are an anti-Semitic party that encourages hate crimes. King ignored the fact that Trump is transparently pro-Israel, while certain Democrats consistently spread anti-Israel rhetoric.

In July, as the economy continued to worsen under President Joe Biden’s administration, Inside Politics’s King further let his bias show, whining that Americans should “give the Democrats some grace” because “governing is hard.” In June, King called pro-Trump Republican candidates “a cancer in the Republican party.”

METHODOLOGY: MRC Free Speech America utilized the AllSides media bias chart as a gauge to determine how NewsGuard rates outlets considered “left” and “lean left” in comparison to outlets considered “right” and “lean right.” AllSides noted it has a “patent on rating bias and use[s] multiple methodologies,” not a homogenous group or an algorithm. “Our methods are: Blind Bias Surveys of Americans, Editorial Reviews by a multipartisan team of panelists who look for common types of media bias, independent reviews, and third party data.”

EDITOR’S NOTE: Readers should be aware that this report only uses the AllSides list to analyze NewsGuard ratings of outlets considered by AllSides to be “left” and “lean left” or “right” and “lean right” and does not necessarily reflect MRC’s characterizations of these outlets.