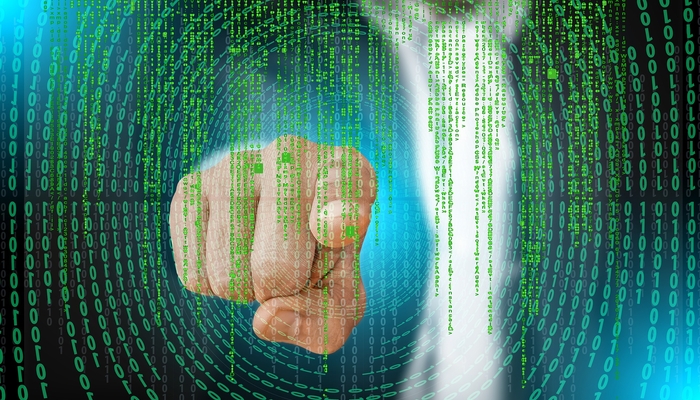 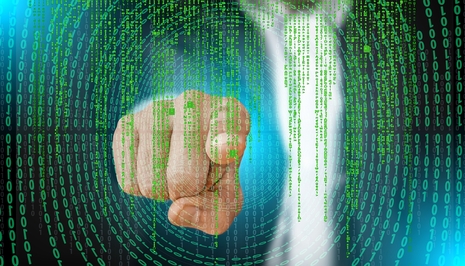 The latest Twitter files show that the liberal media mafia, Democrat politicians and the intelligence community went on an apparent witch hunt to shut down Russian social media accounts, bringing Twitter to its knees and paving the way for the FBI to push Twitter to censor the Hunter Biden laptop story.

The media, politicians, and so-called experts worked in lockstep bullying Twitter into making mass Russian disinformation materialize as far back as 2017, according to the latest Twitter files. “This cycle – threatened legislation, wedded to scare headlines pushed by congressional/intel sources, followed by Twitter caving to moderation asks – would later be formalized in partnerships with federal law enforcement,” independent journalist Matt Taibbi  tweeted Tuesday.

Publicly, Twitter claimed it censored accounts at its “sole discretion,” but internally employees were told to censor “any user identified by the U.S. intelligence community as a state-sponsored entity conducting operations associated with U.S. or other elections.” The move would pave the way for the Hunter Biden laptop story to be censored at the intelligence community’s word.

Taibbi explained that public pressure began to mount “In August 2017, when Facebook decided to suspend 300 accounts with ‘suspected Russian origin.’” Tabbi noted that at the time “Twitter wasn’t worried.”

Taibbi cited an internal email written by then Twitter Vice President of Global Public Policy and Philanthropy Colin Crowell. “[I]t seems like the focus is on the purchasing of 100K of Facebook ads by these Russian accounts,” wrote Crowell according to screenshots “[W]e did not see a big correlation that FB found on theirs.”

Twitter prepared to meet with the Senate Intelligence Committee in September but it did not find the massive numbers of Russian accounts apparently desired by the committee. “In September 2017, after a cursory review, Twitter informed the Senate it suspended 22 possible Russian accounts, and 179 others with ‘possible links’ to those accounts, amid a larger set of roughly 2700 suspects manually examined,” Taibbi reported.

The “meager” results were apparently not enough for Democratic Party politicians. Senator Mark Warner (D-VA), who was on the Senate Intelligence Committee, called the results “frankly, inadequate on almost every level,” according to Reuters. Crowell noted at the time that the meeting was “cordial,” but “Warner and the intel committees are singularly focused on what transpired in 2016. And we simply don’t have a lot of data or conclusions to share with them on that front currently,” according to screenshots of internal Twitter communications.

Crowell also pointed to Democrats “taking cues” from failed presidential candidate Hillary Clinton who allegedly said that same week that “It’s time for Twitter to stop dragging its heels and live up to the fact that its platform is being used as a tool for cyber-warfare.” 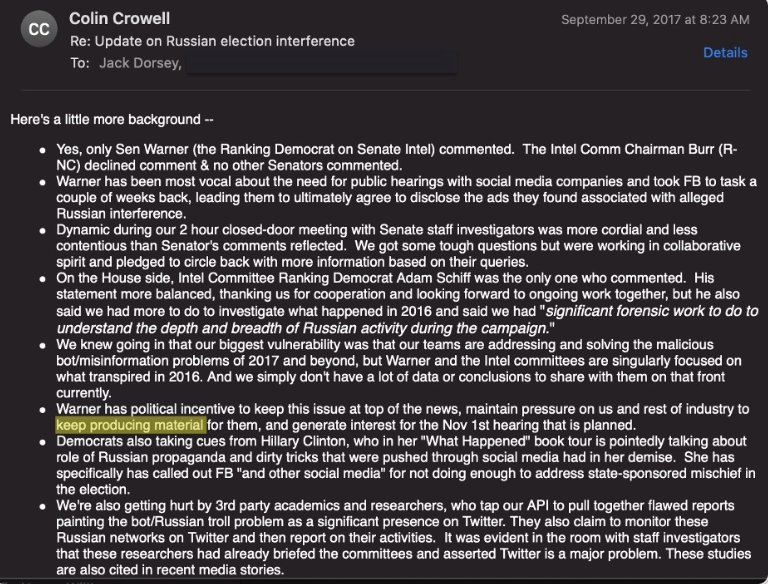 Twitter responded to the criticism with a “Russia Task Force,” which after an apparently “exhaustive” investigation found very little evidence of major coordinated Russian propaganda. “Finished with investigation,” one memo reads claiming that the platform conducted “2500 full manual account reviews” and found “32 suspicious accounts and only 17 of those are connected with Russia, [sic] only 2 of those have significant spend one of which is Russia Today…remaining <$10k in spend.”

But Twitter’s ordeals had just begun. Taibbi noted that “As congress threatened costly legislation, and Twitter … was subject to more bad press fueled by the committees, the company changed its tune about the smallness of its Russia problem.” In one memo, Twitter noted that it “‘pledged to work with [the Senate Intelligence Comittee] on their desire to legislate in the area of political ads.’”

It appears the pledge wasn’t good enough for Congress. “Even as Twitter prepared to change its ads policy and remove RT and Sputnik to placate Washington, [C]ongress turned the heat up more, apparently leaking the larger, base list of 2700 accounts,” Taibbi tweeted.

The press had a field day, and BuzzFeed particularly “claimed to find a ‘new network’ on Twitter that had ‘close connections to… Russian-linked bot accounts,’” according to screenshots of an email allegedly sent to Twitter. When the piece came out, Twitter reportedly capitulated. It was “soon apologizing for the same accounts they’d initially told the Senate were not a problem,” Taibbi noted, and according to screenshots of an internal email the company “suspended all accounts.”

27.Reporters from all over started to call Twitter about Russia links. Buzzfeed, working with the University of Sheffield, claimed to find a “new network” on Twitter that had “close connections to… Russian-linked bot accounts.” pic.twitter.com/rHCWJULOBL

20.“Were Twitter a contractor for the FSB… they could not have built a more effective disinformation platform,” Johns Hopkins Professor (and Intel Committee “expert”) Thomas Rid told Politico. pic.twitter.com/J5Q3WYY3YI

But The damage was done, and Twitter was reportedly aware of it. “Reporters now know this is a model that works,” one unidentified employee wrote in an email apparently referring to Twitter bowing to the establishment media mob. Crowell echoed the same sentiment in an email to Twitter executives. “The tech industry is going to get a lot more scrutiny and questioning and we will not be reverting to the status quo ante [sic] in DC soon,” he wrote.