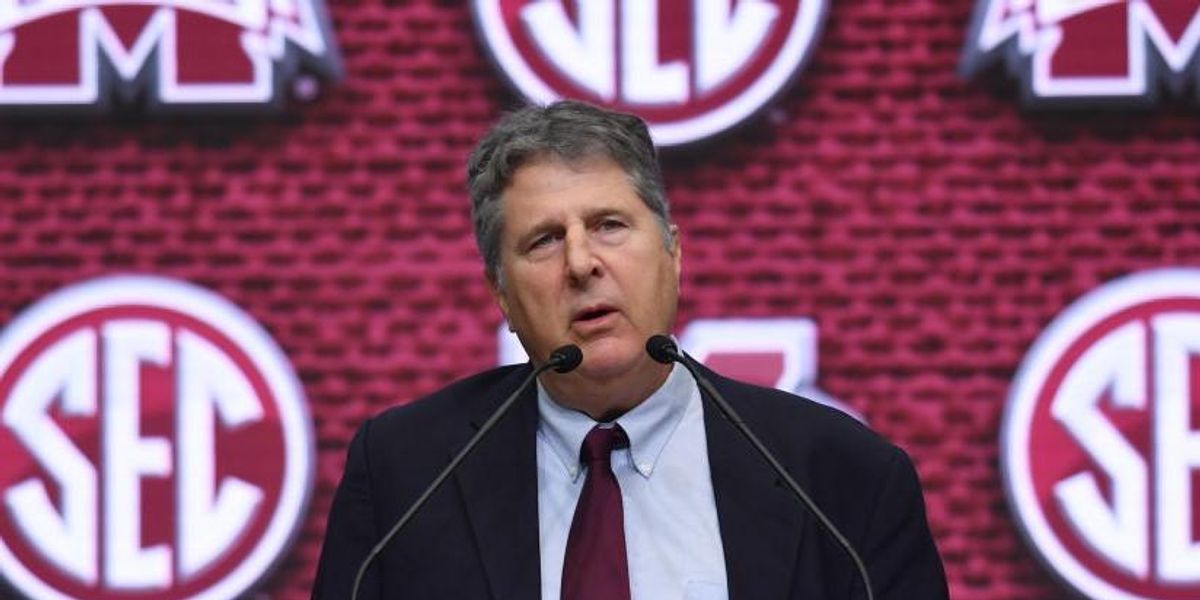 To know Mike Leach — the head coach of the Mississippi State University football team who passed away from a heart attack a few weeks ago — was to love him. I loved him, and I never even met him.

The closest I came was watching him on the sidelines. My favorite team — the MSU Spartans of East Lansing, Michigan, which is more than 800 miles north of Starkville, Mississippi, home of Leach’s MSU Bulldogs — faced off against teams coached by Leach twice in recent memory. Leach bested the Spartans 41-31 in the 2010 Valero Alamo Bowl while he was still at Texas Tech, and the Spartans trounced Leach and the Washington State Cougars* 42-17 in the Holiday Bowl in 2017.

I cheered hard against Leach in both of those games, but otherwise found myself pulling for him. Leach knew his stuff. Often described as an “innovator,” Leach was credited with developing the air raid offense, a scheme he eventually brought to the University of Oklahoma, where I went to graduate school some 13 years after Leach made a brief stop there as offensive coordinator. I am a Spartan first and always, but I still root for the Sooners as well and enjoy the offensive clinic that they regularly put on in Norman. It remains part of Leach’s enduring legacy.

But Leach’s true contribution to college football — and, by extension, to the rest of America — was his endearing personality. An attorney by education, Leach had a brilliant mind and yet still managed to speak like a normal guy. Rather than talk football, Leach often spent press conferences rambling humorously about topics like Halloween candy, treehouses, and cargo shorts. As my friend Anthony Farris at OutKick wrote in a recent tribute, “Mike Leach was a content creator’s dream. Simply put, Leach was a gift.”

Leach was, indeed, a gift. But he was also a giver, even in his last moments. According to a moving statement released by his family shortly after he died, Leach “was able to participate in organ donation at [the University of Mississippi Medical Center] as a final act of charity.” Modern medicine may not have saved Leach’s life, but that day, Leach helped modern medicine save the lives of others.

I have experience with just how precious the gift of an organ donation is, as my mother, Karen, underwent a heart transplant in March 2021. Though otherwise a strong woman in her mid-60s who, in former years, had given birth naturally to three children, my mom suffered from a serious congenital heart condition that went undiagnosed until her early 40s. By the time she was placed on the donor list, she struggled to climb into a car and buckle her seatbelt. Even a brief walk from a parking lot into a restaurant left her breathless. She had to retire early from a teaching career she loved, and she had limited energy to spare for her young grandchildren.

All of that changed the day my mom received her new heart. To protect the interests of the donor’s family, the transplant hospital has divulged few details regarding her heart donor. My understanding is that he was a man who died suddenly in the prime of his life. He may have had a wife and children. He may even have loved college football.

My mom certainly believes he must have been an athlete. “I can’t sit still,” she told me several months after the transplant. It still tickles me to hear her talk about adding more weights and more reps to her workout routine at the gym. Two years ago, spelling the word “gym” would have exhausted her. Now, she puts me to shame with her dedication to fitness.

In July 2021, not even five months after the transplant, she joined my dad, her husband of nearly 50 years, in walking a 5K, which they completed in just over an hour and 20 minutes, good for 2.5 miles per hour.

That speed likely won’t win her any foot races, but my mom knows she has already won the real prize. Thanks to the sacred gift of a new heart and a new lease on life, there is almost nothing she can’t do. In addition to frequent walking and even more frequent interaction with her grandkids, my mother can once again enjoy the hobbies she neglected when her old heart could no longer keep up.

Ever a devoted member of her church choir, my mother sang much of the music at my wedding last December, a mere nine months post-transplant. During the mass, she and my mother-in-law even sang a duet of “Ave Maria,” uniting their motherhood to the motherhood of the Virgin Mary, a precious gift in the earliest moments of our marriage that my husband and I will never forget.

The gift of her organ donation continues to unfold in our lives. My mother dutifully follows all of her medical team’s recommendations for proper care because she wants to honor her donor and his family with her life and health. Jesus Christ gave her the perfect gift of eternal life in heaven, and her heart donor gave her a longer and better life here on earth. Even those of us who love her most can’t compete with that kind of sacrifice.

Her donor, whose name remains known only to God, his loved ones, and a handful of hospital staff, is a hero who lives on through my mother and any other fortunate person who received his organs. Mike Leach gave a similarly heroic gift to those who can now lead new and healthy lives because he once lived.

To summarize their final act of grace, we need look no further than the words of the Mississippi State fight song, which encourages us all to:

“Fight for that victory today.
Hit the line and tote the ball,
Cross the goal before you fall!”

Leach, my family’s unknown donor, and the thousands of others just like them who saved lives by their deaths can teach us all what it truly means to “cross the goal before you fall.” Thank you, Coach. May you rest forever in peace, and may all those whose lives you touched — your family, your players, the entire college football community, and those blessed recipients of your gifts of life — know peace and joy in this world and in the next.

*I would be remiss if I did not acknowledge that the WSU quarterback who played valiantly in the 2017 Holiday Bowl, Tyler Hilinksi, died in an apparent suicide just weeks later. We remember him, and we continue to pray for the repose of his soul and for his family and friends.

“He was an incredible young man and everyone who had the privilege of knowing him was better for it,” Leach said of Hilinksi in a statement released shortly after the young man’s death. “The entire WSU community mourns as thoughts and prayers go out to his family.”

British teenage extremist whose videos were linked to two mass murders in US jailed
Chewy’s push into pet telehealth runs into regulatory hurdles, skeptical veterinarians
US and Germany reportedly preparing to send tanks to Ukraine
The NEW Normal
Marine Corps Opens First New Base In Decades To Counter Potential Chinese Invasion Of Taiwan