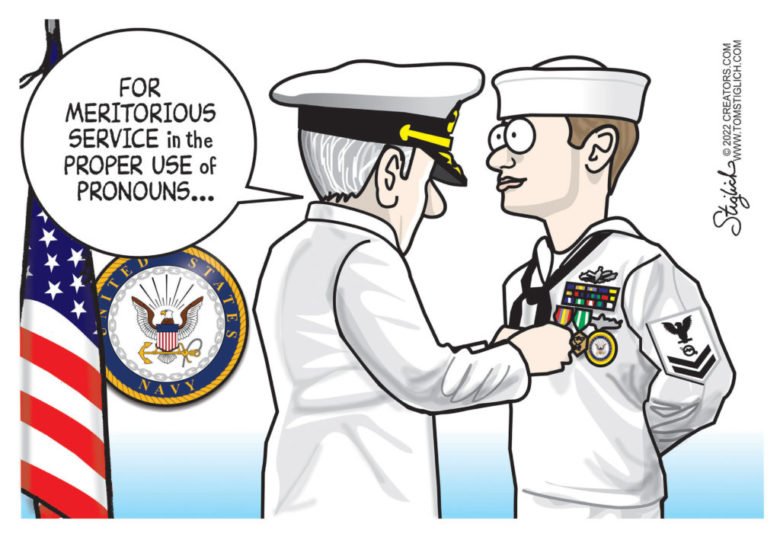 The Department of Defense (DOD) doubled down on “woke” initiatives in 2022 amid rising criticism from experts and politicians that the focus on progressive issues could undercut military readiness.

Under the Biden administration, the Department of Defense (DOD) pushed through a raft of policies elevating racial and gender diversity, equity and inclusion, as well as fighting climate change, as a department priority. This “woke” agenda, brought on by elected and appointed leaders, counteracts the military’s culture of merit and distracts from the DOD’s primary mission to defend the U.S. from external threats, critics argue.

“Wokeness” describes “social, ideological, or environmental policies imposed on the military — not to improve warfighting capabilities — but rather to serve a progressive political agenda,” Thomas Spoehr, director of the Heritage Foundation’s Center for National Defense, told the Daily Caller News Foundation. “The administration is seeking to push its Diversity, Equity and Inclusion agenda within the military.”

Here are the top ways the military went down the woke path in 2022.

The U.S. Air Force Academy reportedly offered programming on “gender-inclusivity” over recent years, according to teaching materials leaked in the fall of 2022. The Academy promoted a seminar on “Transgender visibility” in September, and in 2021 it rolled out a new curriculum instructing cadets to avoid gendered language, including words like “mom” and “dad.”

At the U.S. Military Academy at West Point, cadets learned Critical Race Theory as a part of the class curriculum, according to more than 500 pages of documents obtained by Judicial Watch in June. The documents showed lectures titled things like “White Power at West Point” and “Understanding Whiteness and White Rage.”

A 739-page Congressionally-mandated study to devise a “gender-integrated training model” for the U.S. Marine Corps, completed in late 2022, recommends removing gender identifiers like “sir” and “ma’am” for drill instructors and exposing each recruit to both male and female instructors, according to Marine Corps Times. The report found that the Marine Corps implicitly and explicitly appears to favor male Marines.

The DOD inaugurated its first Diversity, Equity and Inclusion advisory committee in September. Members, comprised of civilian academics and former military personnel, will provide “recommendations on matters and policies relating to the improvement of racial/ethnic diversity, inclusion, and equal opportunity within the Department with a primary focus on military personnel,” according to a statement.

“Various laws and legislation are being proposed and passed in states across America that may affect LGBTQ Airmen, Guardians, and/or their LGBTQ dependents in different ways,” the Air Force said in a March statement, as many conservative states proposed changes to transgender youth policies, including age restrictions on sex change procedures. To get around those laws, the Air Force instructed LGBTQ+ airmen to seek assistance at military medical facilities and offered free legal advise on navigating local laws.

5. Changing fitness standards to permit more women in the service.

The Army, taking a different tack, attempted to modify its physical fitness test to better measure combat readiness as opposed to overall fitness. However, after finding that women failed the test at disproportionately high rates compared to men, the Army once again adjusted scoring to account for gender weaknesses.

West Point, the U.S. military academy, is using the winter holiday recess to remove portraits of Confederate general Robert E. Lee from the academic halls, reviewing markers an independent Congressional commission determined honored the Confederacy and proposing alternative names for other elements of the West Point facility named after Lee, according to a message from the superintendent.

Defense Secretary Lloyd Austin gave approval to an independent commission’s recommendation to scrub nine Army bases, several buildings and a monument at Arlington National Cemetery of their Confederate designations in October, Military.com reported. The bases will be renamed after historical figures, including those who represent women and minorities, breaking with the precedent of primarily naming bases after white men.

The Army, Navy and Air Force unveiled new plans to mitigate their supposed contributions to climate change and adapt to the increasing frequency of extreme or unexpected weather conditions in 2022. In October, the Army released a plan to implement that strategy covering the years from 2023 to 2027, which calls for phasing out old technologies, rolling out electric reconnaissance vehicles and working toward “100% carbon-pollution-free electricity” on all facilities.

“Climate change poses unique challenges to U.S. national interests and the Army at all levels. … The Army must strategically leverage the entire enterprise to mitigate and adapt to climate change,” the plan said.

Ramstein Air Force Base in Germany nearly held a Drag Queen Story Hour at an on-base library for Pride month for at least the second time, a now-deleted Facebook ad shows. Organizers canceled the event in March after backlash from conservatives, including Republican Florida Sen. Marco Rubio, according to Military.com.

“‘Wokeness appears to have increased in 2022,” Scott McQuarrie, who focuses on the Pentagon’s preference of race in making personnel decisions as president of Veterans for Fairness and Merit, told the DCNF. “Ideologically driven, it is adversely affecting recruiting, retention [and] leader quality, eroding morale, compromising combat effectiveness and thus weakening our military.”

Opponents of the anti-woke advocates argue that fixation on left-wing politics in the military redirects attention from more important issues, such as the military’s suicide epidemic, ongoing struggle to crack down on sexual harassment, lack of accountability and overall treatment of servicemembers. Secretary of Defense Lloyd Austin has defended his diversity policies, arguing that the military “will never be too soft.”

Others, such as Center for Military Readiness president Elaine Donnelly, say that DOD’s woke initiatives send a message that “Americans with traditional values are expendable and unwanted” in the military.

Arkansas Republican Sen. Tom Cotton and Iowa Republican Rep. Ashley Hinson warned in an op-ed that by valuing inclusivity over performance, the Pentagon could end up putting lives at risk.

Tesla car battery ‘spontaneously’ bursts into flames on California highway, firefighters need 6,000 gallons to put it out
We Are Not ‘At the Brink of World War III’ — At Least Not Yet
Sunny Jobs Report Hides The Ugly Truth About Biden’s Economy
Spin Cycle: KJP Receives Assist in Tossing Word Salads from WH Counsel Spokesman
Biden’s EV Push Could End Up Costing Taxpayers Four Times More Than Advertised