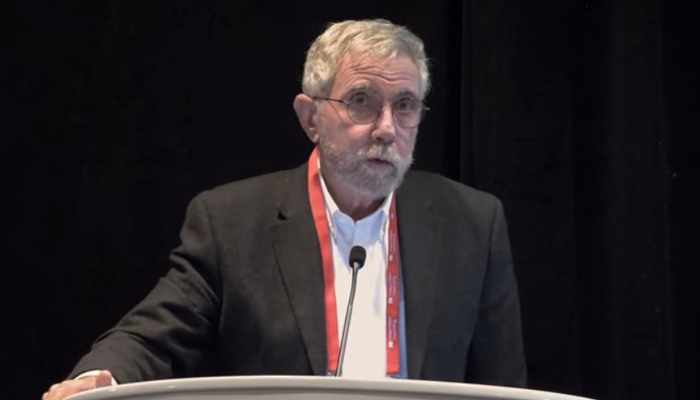 The past year has been a rough one for the wild hot takes of The New York Times’s phony economics savant Paul Krugman. His ridiculous record on the state of the economy under President Joe Biden makes it hard to see how he still takes himself seriously. 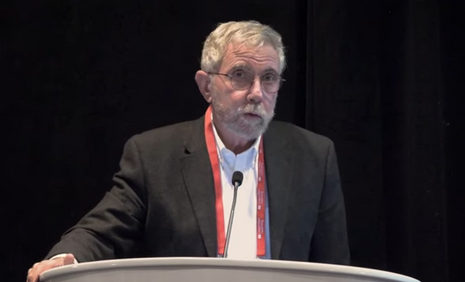 Krugman used 2022 to praise the inflation and labor-shortage-rattled economy as “amazing,” double down on his imaginary “Biden Boom” and convince the masses that skyrocketing inflation was a transitory phenomenon. Despite admitting in July that he was “wrong” on the inflation crisis, Krugman continued to spew his flapdoodle with hubris and impunity on the internet, thereby making his “Bidenomics” gospel a regular punching bag for anyone with a modicum of basic economic sense. It’s long past due for Krugman to relinquish his phony Nobel Prize and call it quits.

Krugman’s track record can be perfectly summed up by two rules he gave to guide “Bidenomics” just before Biden took office Jan. 20, 2021, which ended up imploding in 2022: “Rule #1: Don’t doubt the power of government to help.” “Rule #3: Don’t worry about inflation.”

To cap off the year, MRC Business goes down memory lane to highlight Krugman’s top four WORST economic takes of 2022.

1. Condescending Paul Krugman bleated that the “Biden boom” was great for American workers “whether they know it or not.” (Sept. 5).

There’s arguably no better exhibit of Krugman’s asinine view of the Biden economy than Krugman talking down to Americans as if they’re too stupid to see the glory of Bidenomics.

Krugman, who had already conceded by this time that he was wrong on inflation, audaciously lectured in a Sept. 5 op-ed how “the Biden boom was and is real,” but questioned, “has it been good for U.S. workers? Ask many American workers, and they’d probably answer in the negative. After all, hasn’t inflation eaten up all their wage gains and then some?”

But the plebeians’ negativity is supposedly just based on ignorance, spewed the elitist Krugman, who has $5 million in net worth: “Bidenomics has been good for American workers, whether they know it or not.” In the United States and Canada, there was a combined 3.2-percent decline in real wages in the first half of 2022, according to the International Labor Organization’s Global Wage Report released in December. [Emphasis added.]

In retrospect, the foundation for Krugman’s condescending screed to Americans fell apart like a Jenga set. “President Biden has presided over a huge employment boom that, according to Friday’s [Bureau of Labor Statistics] employment report, is still in progress,” Krugman wrote.

However, a Dec. 13 report by the Philadelphia Federal Reserve blew a hole straight through Krugman’s gaslighting. For the second quarter of 2022, the Fed estimated that only only “10,500 net new jobs were added during the period rather than the 1,121,500 jobs estimated by the sum of the states; the U.S. [current employment statistics] estimated net growth of 1,047,000 jobs for the period.”

That’s a miss of well over 1 million. But Biden’s economy was supposedly a job-making machine in 2022, according to Krugman.

Krugman’s patronizing American workers set himself up for a disastrous “L” over three months before the Philadelphia Fed released its report.

2. Krugman worried high “gas prices” were a major threat to “democracy” just because they could potentially … elect GOP candidates. (Oct. 20).

High gas prices got you down? Well, what you really should be concerned about is the correlated effect they will have on Republicans possibly winning back power in Washington, D.C., according to Krugman. Oh the horror!

Krugman didn’t beat around the bush in his Oct. 20 op-ed headlined: “Will Gas Prices Doom Democracy?” Krugman made selfish political interests the center of his propaganda on high gas prices.

“Will the price of gasoline — a price that has very little to do with which party controls the government — nonetheless determine the outcome of the midterm elections, and quite possibly the fate of American democracy?” Krugman wrote. “[G]as prices may sway a crucial election, a fact that is both ludicrous and terrifying.” Perhaps Krugman really doesn’t care too much about high gas prices as long as his beloved Bidenomics continues to wreak havoc on the American economy. [Emphasis added.]

Climate Depot founder Marc Morano told MRC Business that “Biden’s policies have helped defund and spook energy projects and markets into a retracted state which created shortages leading to massive price hikes.” In addition, Morano added that “[t]he price of gas began to increase in anticipation of Biden’s anti-energy policies just before his inauguration in January 2021.” But according to Krugman, a Republican electoral victory bolstered by high gas prices would “doom democracy.”

At the time of Krugman’s propaganda, gas prices had skyrocketed 18.2 percent over September 2021. But that statistic is essentially meaningless for a multimillionaire like Krugman who gets paid tidy sums to write nonsense for The Times. Glassdoor estimated that the average “total pay for a Columnist at New York Times is $107,657 per year.”

3.  Krugman flailed that 40-year high inflation was “not a crisis” in February.

In Krugman’s mind, 40-year high inflation was “not a crisis.” Yes, you read that correctly.

Krugman appeared on the Feb. 11 edition of Bloomberg TV’s Balance of Power to discuss how the Federal Reserve shouldn’t use “shock therapy” when it comes to finally raising interest rates after keeping them at zero while drastically inflating the money supply.

After conceding that there was “underlying overheating” in the economy that demand the Fed consistently raise rates to fight inflation, Krugman then spiraled into absurdity: “It’s not a crisis.” That’s Krugman’s way of characterizing inflation hitting the highest level in 40 years (7.5 percent) at the time.

Barron’s magazine released a Nov. 11 story headlined: “Inflation Isn’t Going Anywhere. History Says It Could Take a Decade to Get Back to Normal.” But Krugman is apparently still lost in a delusional bubble. He would go on to push in a Dec. 16 column — months after his comical Bloomberg TV appearance — that “given the absence of evidence that inflation is getting entrenched, victory may be a lot closer than many people imagine.” Yikes. [Emphasis added.]

4. Krugman’s solution for Democrats to “crazyproof” budget policy from Republicans meant raising the debt limit and spewing out taxpayer dollars to Ukraine.

Following the 2022 midterm elections, Krugman was triggered that the GOP-controlled House of Representatives would somehow “undermine” Biden’s imaginary “successful governance” on the economy. To fix this, Krugman once again dipped into his bag of terrible ideas.

Krugman had a few solutions for Democrats to stick it to the GOP and none were short of comical. In a Nov. 21 op-ed, Krugman claimed Democrats should “crazyproof” policy by — wait for it — “raising the debt limit high enough that it won’t be a problem and locking in sufficient aid for Ukraine to get through the many months of war that surely lie ahead.”

In Krugman’s view, “Democrats would be, well, crazy not to do these things as soon as possible.” Uh, what? [Emphasis added.]

The U.S. economic situation after nearly two years of Biden’s leadership is so bad that the Organization of Economic Cooperation and Development reportedly estimated U.S GDP growth to only reach an anemic 0.5 percent next year, and only 1 percent in 2024.

But Krugman’s solution for Democrats was to keep the government’s spending obsession, which helped spur the inflation crisis, going like clockwork. Heritage Foundation President Kevin Roberts stated in an op-ed ripping liberal elites like Krugman on the debt ceiling: “With the Federal Reserve having ‘bought’ nearly all of the debt from Congress’s new spending — that is, just printed more money like someone cheating at ‘Monopoly’ — Biden’s only fiscal plan is … more spending!”

Cato Institute Director of Budget and Entitlement Policy Romina Boccia wrote in a Nov. 17 blog that “[r]aising the debt limit without first adopting a credible fiscal stabilization plan that cuts spending and controls the growth in debt would be a mistake.” She continued: “It could rattle investors and worsen inflation expectations.”

In Boccia’s estimation, “Reaching the debt limit is an important wake‐​up call to legislators to correct unsustainable spending.” But to Krugman, spending billions of the American people’s hard-earned tax dollars amidst an inflation fight is “crazyproof.”

Conservatives are under attack. Contact The New York Times at 800-698-4637 and demand it continue to distance itself from Krugman’s awful economic takes.