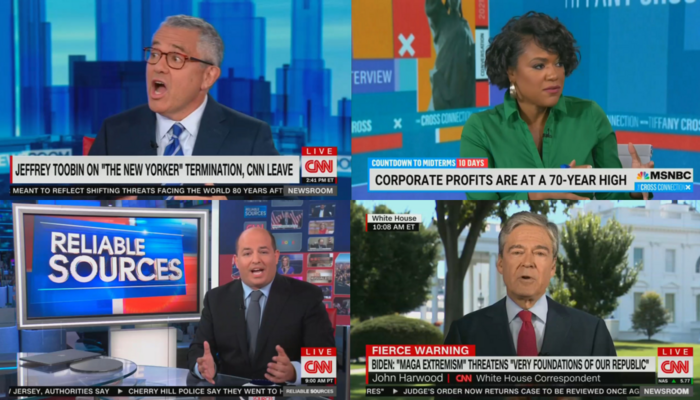 Sometimes the battle against the liberal media seems impossible to win. But in 2022, some of cable TV’s most obnoxious left-wing executives, hosts, correspondents and commentators were shown the door.

On this final day of 2022, it’s worth taking a look back at those who we said goodbye to this year, and thinking about how the fairness of the media landscape is at least somewhat improved by their departure: 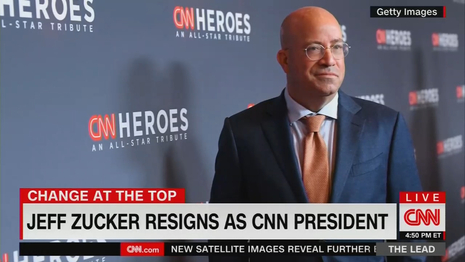 ■ Jeff Zucker: The President of CNN Worldwide, Zucker was forced to quit February 2 over a previously-undisclosed workplace affair. More than anyone else, it was Zucker who steered CNN from being a news organization with a liberal slant to its more recent identity as a shamelessly aggressive partisan attack machine.

Zucker’s embrace of advocacy as a substitute for journalism earned applause from like-minded liberals who chafed at the idea of balance. “Jeff Zucker may not have launched this network but he revived it, he made it relevant again,” liberal CNN anchor Don Lemon wept on-air after Zucker quit.

“Of all the television broadcast networks and cable channels, it [CNN] pushed harder from 2016 to 2020 against Trump and it was part of the firewall that I think has saved democracy this far, under Jeff Zucker,” the Baltimore Sun’s David Zurawik fawned a few days after Zucker’s resignation.

Journalists might have enjoyed the chance to vent their partisanship, but viewers seemed less interested. Months before Zucker left, the network’s ratings were clearly in a freefall, well behind liberal rival MSNBC and longtime cable news leader Fox News.

Zucker’s legacy was giving liberal journalists a permission slip to use their on-air platforms to hurl political mudballs at those they disliked: basically, Republicans and CNN rivals such as Fox News. And that’s a far bigger professional abuse than an unreported workplace romance. 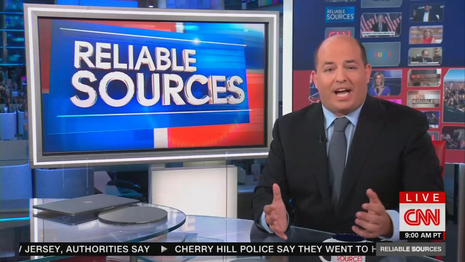 ■ Brian Stelter: CNN media reporter Brian Stelter, the final host of the network’s Reliable Sources program about the media, was axed in August. Instead of using his program to criticize journalists and news organizations that failed to provide properly even-handed coverage, Stelter encouraged aggressive attacks on Republicans, especially Donald Trump, and dismissed actual fairness as the “both sides trap.”

Back in 2016, the living-in-his-own-bubble Stelter scoffed at the suggestion that “journalists are really just Clinton campaign workers in disguise collaborating with her in an attempt to rig the election. This is not just false, it’s ludicrous and it’s damaging.”

He threw verbal grenades at CNN’s far more successful competition at Fox News: “The network evolved, or devolved, into the beating heart of the GOP, a heart with clogged arteries and weak muscles. It’s the network that brought us….smothering patriotism after 9/11, and a portrayal of the U.S.A. that seems stuck in a time warp.”

Any actual journalistic instincts Stelter may have had failed him in 2018 when he fawned over lawyer Michael Avenatti, an anti-Trump fixture on CNN. Stelter told Avenatti: “Looking ahead to 2020, one reason why I’m taking you seriously as a [presidential] contender is because of your presence on cable news.” Just months later, Avenatti was indicted; he’s now in prison after multiple convictions for fraud. 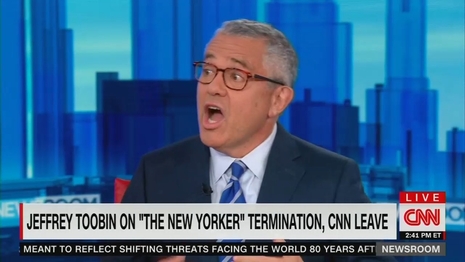 “Clearly the most eccentric, the most unusual, the most complex character on the court is Clarence Thomas,” Toobin sneered on PBS’s Tavis Smiley in 2007. “This is a guy who, sixteen years after he’s been on the Supreme Court, is as bitter, is as angry, is as isolated from the black community as he was on the day he was confirmed.”

Long before Democrats deplored “election deniers,” Toobin was denying the results of the 2000 election. “The wrong man was inaugurated on January 20, 2001 and this is no small thing in our nation’s history,” Toobin wrote in his book, Too Close to Call. He told NBC’s Katie Couric: “I do conclude that, based on what I saw in a year of investigation, that Al Gore won this election.”

When asked whether Hillary Clinton was correct about her claim that her husband’s Lewinsky scandal was the result of “a vast right-wing conspiracy,” Toobin told radio host Don Imus: “I think she was more right than wrong….I think the legal system was manipulated by Clinton’s enemies practically from day one.”

When Barack Obama’s 2008 campaign was threatened by his crack about “bitter” people in small towns who “cling to guns or religion,” Toobin eagerly road to the rescue: “What Obama said is factually accurate,” he claimed on CNN. “It’s been true throughout history that people who have economic problems lash out against various others.” 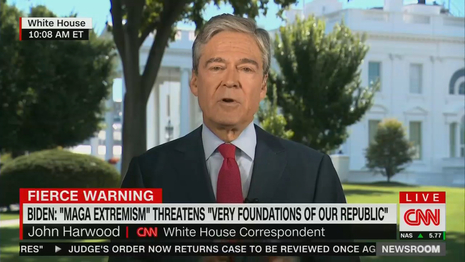 ■ John Harwood: The CNN White House correspondent, who spent much of the past two decades at CNBC and the Wall Street Journal, was let go September 2. Best known for his utterly obnoxious performance as a moderator of a GOP presidential debate in 2015, Harwood was a reliable booster of Democrats and critic of Republicans throughout his career.

Indeed, the Wikileaks e-mail leaks of 2016 showed Harwood, then with CNBC, advertising his loyalty to Clinton campaign officials, secretly trashing his NBC colleague Chuck Todd for asking Hillary about one of her scandals: “amazing…that some people still think it’s worth burning so much interview time with person most likely to be next president on her emails.” And, before Harwood was to interview then GOP-frontrunner Jeb Bush, he privately asked Hillary’s campaign chairman, John Podesta: “What should I ask Jeb?”

Harwood loved to scold Republicans, as when he claimed on MSNBC back in 2017 that “what we’ve seen in the last few years is that the Republican Party has not shown the maturity to govern effectively in a consistent way.”

But as for Democrats, he was full of praise: “It’s important to stop and recognize the breadth of accomplishments that Democrats and President Biden have achieved,” he instructed CNN viewers in August.

He was a Democratic superfan for decades: “People talk about John Edwards being the sexiest politician in America. I think Teresa Heinz may be the sexiest spouse of a national candidate in my memory. She comes across pretty strong, soulful, tender even, in a way,” Harwood opined during the 2004 Democratic convention about nominee John Kerry’s wife.

And when then-President Obama merely swatted a fly in 2009, Harwood was over the moon: “He swatted his hand and he said, ‘I got the sucker.’…It was a, you know, Dirty Harry ‘make my day’ moment.” 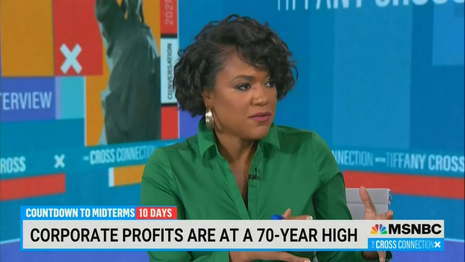 ■ Tiffany Cross: On November 4, MSNBC axed weekend host Tiffany Cross, who former Fox News host Megyn Kelly had called “the most racist person on television.” As MRC’s Geoffrey Dickens noted at the time, “she filled her shows with disgusting attacks on Pro-Lifers who “dance with the Devil” and “sell-out” Black Americans like Senator Tim Scott and Supreme Court Justice Clarence Thomas who dared to be conservative.”

Cross was notable for her nastiness, as when she said the 2020 Republican Convention was “like a modern-day minstrel show,” or when she hatefully dismissed South Carolina Republican Senator Tim Scott: “Don’t argue with people Harriet Tubman would have left behind.”

She showed little respect for American icons. In 2020, she denigrated Mount Rushmore as “the most grandiose symbol of U.S. imperialism on Earth.” This year, she suggested America itself did not deserve to survive: “Perhaps when you build a nation on stolen land, with stolen labor, it was never going to be a Republic we could keep.”

American law enforcement was a favorite target: “This is clearly not a system that can be reformed….It feels like it’s just time to, to burn it down, you know?” And after the Supreme Court’s decision overturning Roe v. Wade, Cross preposterously argued: “In America, where guns are the leading cause of death for children, an AR-15 has more rights than a woman does.”

There’s no question that CNN, MSNBC and other establishment media outlets will be lopsidedly, and obnoxiously, liberal in 2023. But it’s worth taking a moment to reflect that at least a handful of the media’s most aggressive partisans are now on the sidelines.

For more examples from our flashback series, which we call The NewsBusters Time Machine, go here.

Joy Reid: ‘What Happened to Tyre Nichols Was as American as Apple Pie’
‘He wants world dominance’: Pompeo reveals who he thinks is more dangerous than Putin
Sarah Huckabee Sanders To Deliver GOP State Of The Union Rebuttal
‘American Taliban’ Was Released Early — and Promptly Met with an ISIS Recruiter
‘Seinfeld bill’ is real. It’s going through the N.J. state legislature to battle telemarketers — and some might even call it spectacular.