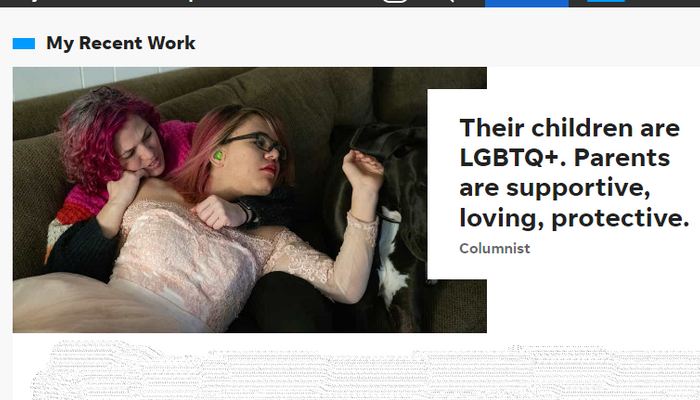 Is USA Today a News Paper? Or an Opinion Paper?

The question isn’t a joke. The top of Wednesday’s paper featured a dominant article with the headline:

Parents of LGBTQ kids beat the learning curve
Love, acceptance and understanding might conquer all, but navigating today’s climate takes a new level of strength 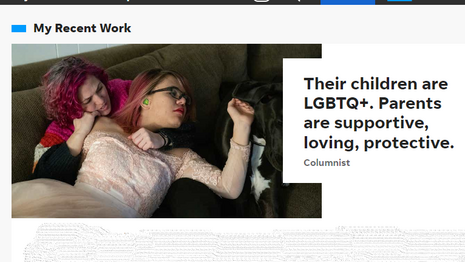 Oliver Honig started donning dresses and skirts at age 3. His cousin first gave him a tutu and he wanted to wear it everywhere, so he did. At age 5, he was skillfully walking up and down the steps of his family’s backyard slide in his mother’s high-heeled boots. By the time he was 8, he was experimenting with makeup, often overlining his mouth with so much lipstick the results rivaled comedic clownery.

For all this indulgence in gender bending, Chrissy Honig is presented as a hero “beating the learning curve.” Despite the tutus, boots, and lipstick, Oliver identifies as a boy, but “I’m still trying to figure out who I am.”

Oliver “feels beautiful and gleeful. He feels like himself. Yet, both Oliver and his mother acknowledge some folks in the audience are uncomfortable” when he performs in school talent shows. Hackney lectured:

But comfort for this family in Westfield, Indiana, a suburb about 30 miles north of Indianapolis, doesn’t lie with what other people or other parents think. Never, ever. Because it’s all about Oliver being comfortable. It’s about him knowing and believing that he is accepted, loved and supported by those who care about him – and that’s exactly how it should be.

“Comfort” is not something that conservative critics are allowed. They are quoted nowhere in this article. They are presented as the public enemy:

The steady force of anti-gay and anti-trans sentiment understandably has pushed parents into uber-protection mode. Yes, kids can be cruel, but socially conservative adults have taken to attacking LGBTQ children, too. It’s a sad state of affairs when we can’t — or won’t — evolve beyond outdated dress conformity and gender stereotypes…

Later, Hackney reports a poll that found 21 percent of Generation Z now identify as LGBTQ, and dismisses relatives who “dismiss gender exploration or nonbinary identities as fads.” Then there’s a swing at Elon Musk:

And let’s not forget about one particular billionaire social-media platform owner who wastes time hatefully joking about those who want to be identified by the pronouns of their choosing.

Hackney also chronicled parents Karessa and Brian Wheeler, who have a 19-year-old son identifying as female and a 14-year-old daughter identifying as male. She touted their “nurturing, guidance and sensitivity” as “truly extraordinary.” In the middle of the piece, Hackney disclosed that these mothers are both personal friends of hers, which would explain all the passion.