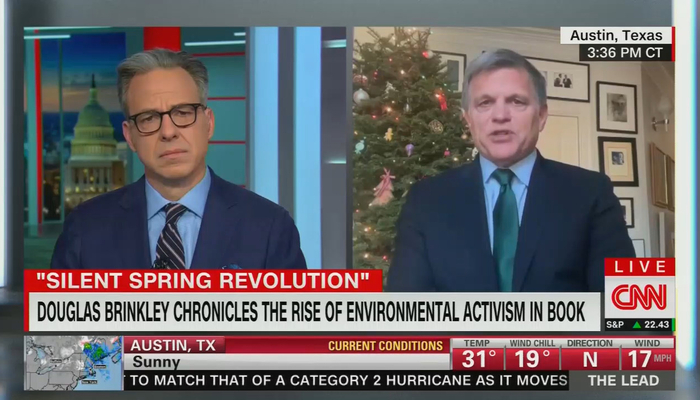 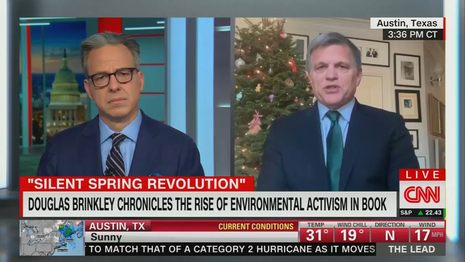 On Friday’s The Lead with Jake Tapper, CNN’s resident historian Douglas Brinkley fretted that Americans aren’t clamoring for far-left 1970s-style environmental policies, even as he saluted California Governor Gavin Newsom as a “hero” for pushing for the utterly unrealistic policy of banning all fossil fuel cars in the next dozen years.

Brinkley suggested rank-and-file Americans could change the weather: “Until the public talks about climate change as being the issue — we had a midterm election and it’s ranked number five or something — until we’re demanding it of our public servants, we’re going to be in these kind of weird climate events one after the other, wondering what to do, and kicking the can down the road.”

As for Newsom, Brinkley naively applauded the California Governor for a ban on internal combustion vehicles starting in 2035: “The hero, Jake, right now in my mind is California, under Gavin Newsom and others. By 2035, they’re not going to be selling, you know, vehicles that are run on fossil fuels….”

So, everyone will have an electric car they need to charge? Yet earlier this year, California’s power grid was “on the brink of collapse,” a fact which led Politico to conclude that “the state with the most ambitious energy goals is far from achieving them.” While Newsom is setting new, far-in-the-future goals, his state is failing to meet near-term goals such as closing the last nuclear plants.

“Growing demand for electricity and the fickle nature, for now, of greener technologies such as wind and solar are making it hard to progress toward the state-mandated goal of a grid that’s 100 percent emissions-free by 2045,” wrote Politico’s Camille von Kaenel.

Governments can’t even competently provide the services they are more than adequately funded to provide, yet presume to tell industry what to do….The same week that California policy makers announced an ambitious plan to shift California’s 27-million drivers into electric vehicles or plug-in hybrids, they also announced that Californians who currently own electric vehicles better not charge them for several days because the grid can’t handle the load….The market already is moving in the EV direction, so the state should just let companies do their thing.

Here’s video of the key part of that segment, followed by a slightly longer transcript (click expand).

Anchor JAKE TAPPER: Let’s talk about your book, because on Monday more than 190 countries signed on to a U.N. agreement to protect the environment. You write about bipartisan legislation the U.S. previously passed on the environment. You know, a lot of people might not know that Richard Nixon was the President when the EPA was created. Why has it been so hard to achieve this type of bipartisan recognition of the importance of environmentalism in recent years, do you think?

Historian DOUGLAS BRINKLEY: Well, you know, Jake, the reason is because, you know, I write about John F. Kennedy, Lyndon and Lady Bird Johnson and Richard Nixon and doing all of these extraordinary new laws and, you know, things like the Clean Air Act and Clean Water Acts, the Endangered Species Act of 1973 passed the Senate 92-0, but we had a movement. It was the people demanding it.

I write about the first Earth Day in 1970, and it was musicians like Marvin Gaye writing “mercy me, the ecology,” and Andy Warhol ended up doing the series of endangered species, the great painter Robert Rosenberg did the poster, and grassroots organization were saying “We want clean air. We want the lead out of gasoline. We want no more smog causing respiratory illness in Los Angeles and New York. We want the Great Lakes clean that we can catch fish there again. We don’t want rivers like the Cuyahoga of Ohio or the Rouge in Michigan on fire.” It was the people demanding it.

Until the public talks about climate change as being the issue — we had a midterm election and it’s ranked number five or something — until we’re demanding it of our public servants, we’re going to be in these kind of weird climate events one after the other, wondering what to do, and kicking the can down the road.

The hero, Jake, right now in my mind is California, under Gavin Newsom and others. By 2035, they’re not going to be selling, you know, vehicles that are run on fossil fuels, and our post office is starting to go to electric vehicles. So the movement’s there, but we’ve got to have a Rachel Carson-like figure, somebody who leads us into the promised land of a cleaner and safer, healthier tomorrow, and make sure we don’t have species vanishing willy-nilly on our life watch.

What Could Go Wrong? New Bill In Tennessee Aims To Create Digital Driver License
What The Media Won’t Tell You: The Squad, Race And Anti-Semitism
Judge Strikes Down Attack On Free Speech By NFL, Phoenix
It’s About Time: Bring on the Tanks!
‘Fair And Safe Competition’: How One Legal Group Is Leading The Charge To Protect Women’s Sports