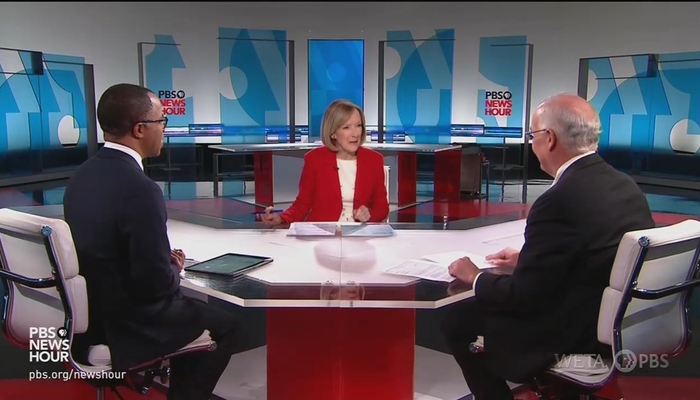 Friday’s PBS NewsHour started their pundit round-up with the usual agreement. Both David Brooks and Jonathan Capehart could agree that Ukraine’s President Zelensky was Churchill, and agree that the Pelosi-picked January 6 panel was wonderful and persuasive (and not at all partisan in selection or practice).Then anchor Judy Woodruff wanted some year-end “naughty or nice” awards.

Woodruff asked Brooks: “Who are some people, who is somebody, David, who you think should get something nice from Santa on Christmas, and who’s somebody who you think maybe needs some coal?” He picked Joe Biden’s chief of staff.

They blame him for everything. They can’t blame the president, so they blame the chief of staff. They have had a good year. The White House has had a good year. I assume Ron Klain has had something to do with that. And so I — the long-suffering, neglected Ron Klain, and I hope Santa, not even a stuffing stocker, a whole model train set.

Because the media are nearly unanimously Democrats, Ron Klain is not a controversial figure at all. No one calls him “Biden’s brain,” as they did with Karl Rove and George W. Bush. If he’s “neglected,” it’s because everybody doesn’t talk about Ron because Ron likes it that way.

Brooks also credited Team Biden for finding a balance between “extreme interventionism” and isolationism on Ukraine: “I think the Biden administration has done an excellent job of finding that balance.”

Capehart had an unsurprisingly MSNBC list for Santa, starting with the coal:

CAPEHART: First, the IRS for not auditing President Trump’s taxes, as they were supposed to do under law, when he was president of the United States. That was one of the many breaking news stories that hit last week, this past week.

And, also, the members of Congress who did not comply with the subpoenas from the January 6 Committee to do what I think is their patriotic duty, to talk about what they knew and what happened during January 6.

And the — I mean, it worked. Those groups of people getting the nice — getting on the nice list, they made sure that Democrats held onto the Senate, and the Republican red wave turned out to be less than a trickle in the House.

Democrats equal democracy, and voting for Democrats puts you on Santa’s nice list. The only mild dissent from liberal orthodoxy came when Brooks gave some coal to teachers unions on COVID lockdowns:

BROOKS: I just look at the schools and the effect that the long and overly, overly, overly long school closures during COVID had on school — student attainment and the lifelong prospects of a generation of young people.

I do blame a lot of different people for that, but I think the teachers unions blame — bear a share of the blame for really widening inequality, hurting social mobility, and hurting a lot of students. So, they get my coal.

The tilt on the PBS NewsHour is funded in part by….you, the American taxpayer. And by Raymond James financial advisers.