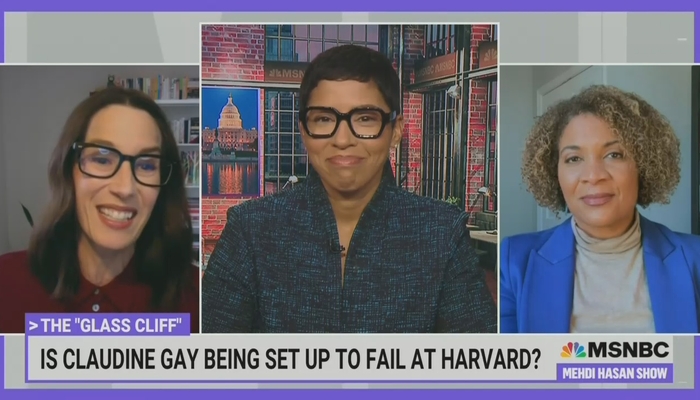 There’s no silver cloud for which the identity-politics crowd can’t detect a downbeat lining!

Take the news of black women being appointed to some of the country’s most prestigious positions. You’d think that would be cause for unqualified celebration in liberal circles. But not so fast!

On Mehdi Hasan’s MSNBC show today, guest host Melissa Murray led a segment on “the glass cliff.” The notion is that women, particularly women of color, tend only to be appointed to prestigious positions at institutions that are in crisis, and thereby are being “set up to fail.”

Thus, discussing the naming of Claudine Gay as the next president of Harvard, Murray said that while the honor is well-deserved, “there is a big ‘but’ to this story.”

Murray complained that Gay will be taking over at Harvard around the time the Supreme Court might be overturning the university’s race-conscious admissions policies. Gay will thus “be stepping into a huge legal and political mess.”

And as you’ll see in the screencap, Murray suggested that Gay is “Being Set Up To Fail At Harvard.” 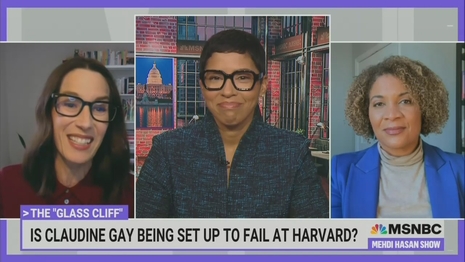 Guess what? At virtually every point in time, every major institution is facing some sort of major challenge. Sure, there are risks for those who fail. The Cleveland Browns have fired six head coaches just since 2010! But there are also huge opportunities and rewards for those who succeed in addressing those challenges.

The panel somehow also tried to cast Supreme Court Justice Ketanji Brown Jackson as another example of black women appointed to a prestigious position in perilous circumstances, facing that “glass cliff.” The panel cited the Court’s upcoming decisions on affirmative action, and voting and LGBTQ issues.

Panelist Fatima Goss Graves, head of the National Women’s Law Center, expressed huge concern and sympathy for Justice Jackson, saying that what Jackson has taken on is “a burden that no one human can bear . . .  too much for any singular person’s shoulders.”

True! Just imagine the burden of being interviewed for a gushing Vogue article, and posing in an Oscar de la Renta outfit for pics by Annie Liebovitz, perhaps the world’s most famous photographer? Oh, the humanity!

And let’s remember that Jackson enjoys a lifetime appointment. You really can’t fail out of a Supreme Court seat!

Goss Graves also had the chutzpah to describe Justice Jackson as “sort of a singular voice around blackness on the Court right now.” Justice Clarence Thomas, hello? From his bio:

“After his father abandoned the family, he was raised by his grandfather in a poor Gullah community near Savannah.”

Not authentically black enough for the liberal crowd, apparently.

Let’s also remember that when Biden’s campaign for the Democrat nomination was on the verge of collapse in 2016, Rep. James Clyburn, in return for his endorsement in the South Carolina primary, extracted Biden’s promise to appoint a black woman to the Supreme Court. Was Clyburn fiendishly setting Brown Jackson up to fail?

On Mehdi Hasan’s MSNBC show, the notion that black women in particular are being “set up to fail” by being appointed to lead major institutions facing challenges, was sponsored in part by Subaru, Downy, Pfizer, and Abbott, maker of Freestyle Libre.

MELISSA MURRAY: History is being made at Harvard. The Ivy League university named its 30th president last week, and the honor went to political scientist Claudine Gay . . . Well, it is certainly a well-deserved honor, but, and there is a big but to this story, President Gay will take over at Harvard next July, right around the same time that the Supreme Court is poised to overturn the university’s long-standing race-conscious admissions policy.

This means that Claudine Gay will likely be stepping into a huge legal and political mess as soon as she’s sworn in. Now, I feel this so acutely. In 2016, I became the interim dean at Berkeley law after a major sexual harassment scandal. It was obviously an amazing career opportunity for me, but it was also amazingly fraught with career risks, and I know I’m not alone.

For a lot of women, and especially women of color, Claudine Gay’s landmark appointment feels a little bit like another case of women getting a much deserved leadership opportunity, but only in times when their institutions are undergoing some kind of profound crisis.

You’ve obviously heard of the glass ceiling. Well, this is a little bit like a glass cliff. The idea that women get a better chance of breaking through that ceiling only when someone is needed to clean up an intractable mess. The danger, of course, is that in cleaning up the mess, you run the risk of falling off the cliff.

CHRISTY GLASS: White women, and women of color, and men of color as well, tend to be appointed CEO, or head coach, to losing teams or to organizations in crisis. And what we also find is that they’re often blamed for the crisis that was not of their making, that predated their leadership trajectory, and held to account for the crisis.

MURRAY: This feels like a really vicious feedback loop where women are essentially set up to fail and, when they do fail, critics say, see, should have never had a woman. That’s affirmative action at work.

We know this phenomenon in real life. We have a sitting member of the Supreme Court, Ketanji Brown Jackson, who herself faces a sort of glass cliff situation. She’s the first woman of color, the first black woman, rather, to serve on the high court. But she comes on to the Court just as a conservative super-majority is chipping away at civil rights.

What is her glass cliff? How does she grapple with this and navigate this in this lifetime appointment?

FATIMA GOSS GRAVES: You know, the irony that she  joined the Court in the wake of Dobbs, during the arguments for the affirmative action cases, the cases before the court on voting, on LGBTQ equality, and more.

And in many ways she’s sort of a singular voice around blackness on the Court right now. It is a burden that no human can bear . . . It’s too much for any singular person’s shoulders, but it is exciting to see nonetheless, I have to say.

Man threatens father and his ‘small child’ at dog park, even comes at them when they try to leave, witnesses say — then dad shoots man dead
Biden Keeps Making Claims About Economy That Just Aren’t True
‘America Is Under Assault From Chinese Spying,’ Rep. Mike Waltz Says of Mysterious ‘Spy Balloon’
Director of homeless shelters says handouts make homelessness worse, and outraged activists want him fired
MSNBC host says being in US Capitol after Jan. 6 ‘feels like a visit to an historic battlefield’